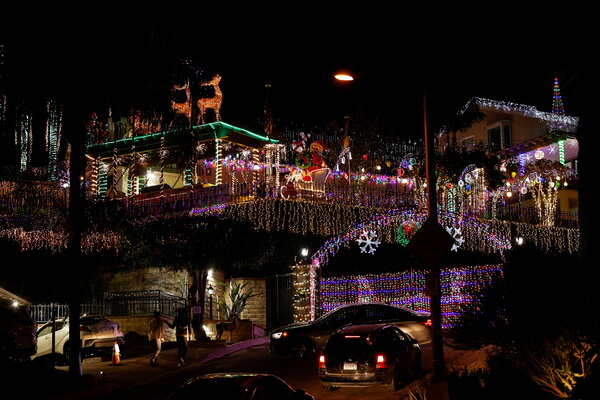 As I type this, I’m sitting in my undecorated kitchen in Los Angeles, blasting Spotify’s “Christmas Favourites” playlist and trying to summon something resembling cheer. Instead, I started tearing up while Don Henley wailed about bells ringing “sad, sad news.”

On Tuesday, as Californians met their first Latino Senator and the first Black woman to be named secretary of state, hospital officials made an extraordinary plea for people to stay home, to resist the temptation to gather with loved ones.

Intensive care units across the state are at or near capacity, and tens of thousands more people are testing positive for the coronavirus every day. Even if the surge drops off sharply — not likely, given how things went after Thanksgiving, experts say — the state has predicted that patients will continue to flood intensive care units and emergency rooms well into January.

And yet, as The Los Angeles Times reported, shoppers are still flocking to shopping malls, which are still allowed to be open, despite that in most of the state, nearly every other type of nonessential business is supposed to be closed.

Nevertheless, there are reasons to celebrate. More and more health care workers and their families are getting vaccine doses, giving them a peace they haven’t known since early this year.

There are still tamales and cookies and even Zoom parties. There’s the hope that next year will be better. And when it is, we can look forward to the holidays being even brighter.

Stay caught up over the weekend

Track coronavirus cases by county in California, as well as hospitalizations and deaths. [The New York Times]

See how full intensive care units are at hospitals near you. [The New York Times]

Read about the vaccines. [The New York Times]

Find answers to your questions about the stimulus deal. [The New York Times]

Catch up on the state’s restrictions. [CA.gov]

Figure out what to do at home. [The New York Times]

In a surprising turn, isolation and living outdoors have helped many who are homeless escape the virus. [The New York Times]

Sonoma County ranks worst among Bay Area counties in Covid-19 prevalence. But officials there have taken no enforcement action against at least 15 large wedding gatherings. [The San Francisco Chronicle]

Unfair ratings are costing some Instacart shoppers, even as they risk their lives. [The Los Angeles Times]

After a four-year investigation, the state’s department of justice reached a deal with the Kern County Sheriff’s Office, long the subject of complaints over excessive use of force. The deal requires several reforms. [The Bakersfield Californian]

Over decades, cities have lost control of police discipline. [The New York Times]

Retirement for Eddie Garcia, who was until recently San Jose’s police chief, didn’t last long. He was tapped to become Dallas’s next police chief. [The Mercury News]

The corrupt former congressman Duncan Hunter, from the San Diego area, was among the people President Trump pardoned this week. They weren’t the last, either. [The New York Times]

Rob Bonta, a State Assembly member, has gotten an array of endorsements to succeed Attorney General Xavier Becerra, who has been asked to join the Biden administration. [The Sacramento Bee]

For Los Angeles’s mayor, Eric Garcetti, there doesn’t appear to be an exit to the Biden administration. [Politico]

Cal’s football season is over. Now, all involved are asking if it was worth it. [The New York Times]

Tiki bars are beloved, but they have a painful and under-examined history. Can they be reformed? [The New York Times]

If you’ve been wondering what George Clooney’s been up to, he’s in Los Angeles. [The New York Times]

Need another visual escape? Here’s how to pretend you’re in a snowy Quebec City tonight. [The New York Times]

We’ll be off tomorrow and Monday. We wish you comfort, safety and time to rest. Thank you, as always, for reading.