There was plenty of blame to go around for the outbreak of voting machine breakdowns and long delays that plagued New York City polling places on Election Day, but no one was certain of a precise solution — only that one was needed fast.

Although Tuesday’s election did not have the highest voter turnout ever, it did have the most ballot pages stuffed into digital scanners on a single day — because of the unusual two-sheet ballot design, which appears to have contributed to machine breakdowns and long voting delays.

Sarah Goff, the associate director of Common Cause, the good government group, said that the problem with broken scanners was like “a giant paper jam citywide.”

The age of the machines may also be a factor: The scanning machines are eight years old and are expected to be in use for 10 years, according to Michael Ryan, the executive director of the Board of Elections.

“We had almost four million pieces of paper pass through those scanners on Election Day,” Mr. Ryan said. “This was volume of an unprecedented proportion.”

Nonetheless, Mr. Ryan and the elections board suffered the brunt of the blame in the Election Day post-mortem, as elected officials and voters condemned the chaos and called for changes at the Board of Elections.

“Everything we’ve talked about these last weeks is about increasing participation in our democracy, and people did that in New York City, they came out in droves because they wanted to participate; that is very good news,” Mayor Bill de Blasio said on Wednesday at his weekly news conference. “The really bad news is that the Board of Elections simply can’t function. It cannot do its job.”

Mr. de Blasio reviewed the litany of Tuesday’s problems: broken scanners at dozens of polling sites, including some sites where at some point all the scanners were down, and long waits to vote that lasted “in some cases two or three hours.”

“It’s as if there was a purposeful plan to make voting as unappealing as possible,” he said, although he added that he did not think that was the case. But he said that the board “is making it harder for people to vote, not easier. It is part of the problem. It must change.”

He called for the State Legislature, with both houses now under Democratic control for the first time in nearly a decade, to pass a law to professionalize and modernize the board and give its executive director the power to run it “like any other agency.”

He also called for Albany to pass legislation that would mimic voting advances common in other states, such as “early voting, vote by mail, no-fault absentee ballots, same-day registration, take all of the roadblocks out of the process.” 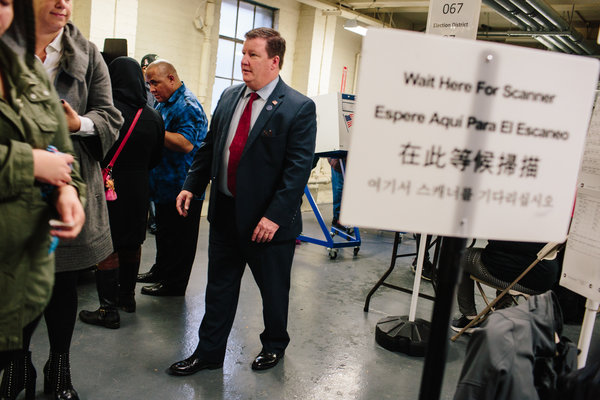 Gov. Andrew M. Cuomo in comments in a radio interview also said he favored steps to make voting easier. But he did not address the issue of changes to the Board of Elections.

Legislation to make voting easier passed the State Assembly this year but did not advance in the Senate. Assemblyman Charles D. Lavine, a Democrat of Long Island, who chaired the election law committee, said that he expects the legislation to be introduced again early next year and to pass now that the State Senate has shifted to Democratic control.

But Mr. Lavine appeared less receptive to the mayor’s call for changes at the Board of Elections, whose members are nominated by Democratic and Republican Party leaders.

“The system of appointments of elections commissioners is designed to ensure a measure of independence on the part of these boards of elections,” Mr. Lavine said. “We have to be cautious about the way in which we address issues involving the commissioners.”

Mr. Ryan was unable to provide information about how many scanners had broken, how long it took to fix then, how many repair calls its technicians responded to, or similar factors that would help assess the breadth of the difficulties. He said that the board was compiling the information and would analyze it before making it public.

Voters found the ballots confusing. They had to fill them out, tear them along a perforation and then feed each page separately into the scanners. That meant that the machines were working twice as hard as usual.

In some cases, voters appear to have fed the two pages in at once, which could have jammed machines. Or the pages might have been torn unevenly, which also could have caused jams. Or they were damp because voters came in from the rain, which made the ballots stick in the scanners.

Susan Lerner, the executive director of Common Cause, said that the two-sheet ballot was a mistake. “It’s complicated,” she said. “It puts unnecessary pressure on the machine.”

More than 1.9 million New York City voters, according to a preliminary count by the Board of Elections, cast ballots in the governor’s race on Tuesday, a good indicator of overall turnout. That means that nearly four million ballot pages — because of the two-sheet design — were fed into the machines.

The highest turnout in recent years was in the presidential election in 2016, when more than 2.7 million people voted in New York City, according to board data. But in that election, and all others since digital scanners came into use, the ballot consisted of only one sheet of paper.

Mr. Ryan said that a few years ago the board was criticized because the font size used on ballots was considered too small. That was part of the board’s considerations in choosing to use a two-sheet ballot, with a larger font size.

The only borough that had a single-sheet ballot was Staten Island, because there were fewer candidates and races. Mr. Ryan said that there were far fewer problems reported there.

“Staten Island had a one-page ballot, very few problems to report, generally good voter experience,” Mr. Ryan said on Wednesday. “The rest of the city had a two-page ballot and we had issues.”