The neighborhoods in Queens that reeled during the pandemic are buzzing. But recovery feels very far away.

Every day along Roosevelt Avenue in Queens, people stream off the elevated subway into a swarm of activity. Vendors ring bells and shout in Spanish — “Masks! Water! Shaved ice!”— as smoke rises from grilling meat and cumbia music competes with the rumble of the train.

A vibrant energy seems to have returned to the cluster of neighborhoods in north central Queens that became the first epicenter of the coronavirus in the country. A year ago, thousands had fallen ill, and hundreds had died.

But beneath the bustle lies desperation. The vendors, whose broad array of street food reflects the area’s diversity, often have lost steady jobs and do not know how else to make money. Residents and many business owners have fallen far behind on rent, protected only by a state moratorium on evictions that is set to expire at the end of the summer. Food pantry lines remain long.

“The beauty of what we see is that the immigrant community always finds a way to get by,” said Francisco Moya, a local Democratic city councilman. But it should not be confused with recovery, he added. “What you see on Roosevelt Avenue — it’s survival.”

Jenny Escobar, who once had a reliable job as a babysitter, now spends her days sitting on 82nd Street beside a cooler filled with homemade ice pops that she sells for $2 apiece. “There’s no work,” Ms. Escobar said. “There’s nothing.” 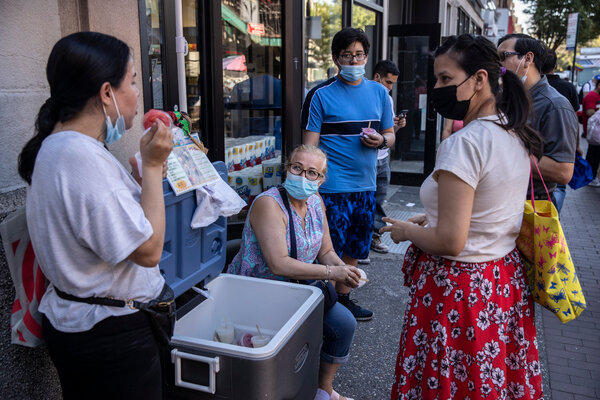 Ms. Escobar, who is from Colombia and like many of those interviewed spoke in her native Spanish, said whatever she earns goes toward paying back rent, and she feared what might happen to her and her fellow vendors if they lose this lifeline. City agencies have started to increase enforcement again this summer, putting unlicensed vendors at risk of steep fines.

At Make the Road New York, a community organization, about 600 people still collect food each week at their Jackson Heights location, organizers said, more than double the number of people served before the pandemic.

The interlocking neighborhoods — Corona, Jackson Heights, Elmhurst, East Elmhurst and Woodside — are home to a high concentration of undocumented people who have been ineligible for government aid such as stimulus checks and unemployment insurance.

Many qualify for some newly created benefits, such as a state rent relief program and the Excluded Workers Fund — a $2.1 billion fund to give one-time cash payments to undocumented people who lost work. But the money from that fund is not yet available; state officials are still ironing out the distribution process.

There are some promising signs of recovery. In Corona, one of the ZIP codes hit hardest by the pandemic in New York, hospitalizations have declined to fewer than a dozen, and vaccination rates, which have lagged behind other spots in the city, are creeping up.

And while scattered businesses closed — including medical, dental and legal offices — most shops and restaurants have stayed open, according to the Queens Chamber of Commerce and others in the local business community. Some ZIP codes in the area are even among the handful in the city that added more new businesses last year than in the year before the pandemic.