Weather: Partly sunny, with afternoon thunderstorms. High in the mid-80s. 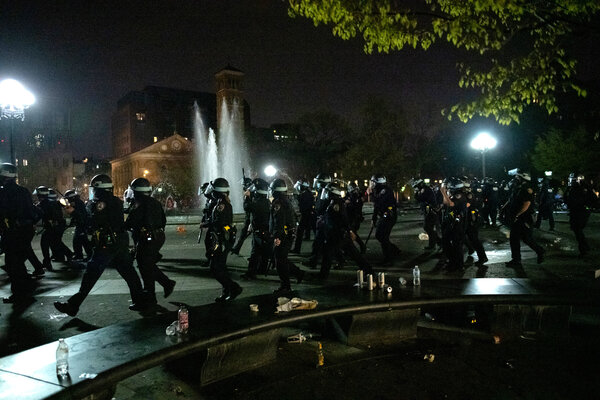 On a warm night, it’s common to find people gathered at Washington Square Park in Greenwich Village, playing music, skateboarding or simply having conversations. The gatherings have been even more common during the pandemic, when people have been reluctant to meet indoors.

But this weekend, a different, more chaotic scene emerged. Columns of police officers streamed through Washington Square Park and the surrounding streets clad in riot gear, pushing and arresting people as the park was cleared on Saturday night.

The officers were enforcing a new 10 p.m. weekend curfew at the park, which closes at 12 a.m. on most days, in order to clamp down on large gatherings, trash and noise, among other issues, according to the Parks Department.

But video and other images of the encounter were reminiscent of the violent clashes between protesters and officers that took place a year ago in the aftermath of George Floyd’s killing when a citywide curfew was imposed.

And as Mayor Bill de Blasio defended the officers’ actions on Monday, the confrontation at the park has once again stoked tensions about the conduct of the police, just one week before New Yorkers start heading to the polls to elect the Democratic candidate for mayor.

Videos taken at the park before the officers cleared it showed dozens of people milling around in what appeared to be a relatively calm scene. Some people, upon seeing the officers, started chanting “abolish the police.”

After officers declared the park closed, people started yelling and saying they would not leave, videos showed. But as officers moved in, videos showed them wrestling people to the ground and making arrests, and chasing after people down the street, as some people threw bottles at officers.

The police said 23 people were arrested and eight officers injured during the altercation.

On Sunday evening, people gathering at the park braced for a similar encounter, but the police appeared to avoid conflict, and a dance party broke out.

People living near the park have complained for years about noise, skateboarders and drug use, but the images from Saturday raised criticism from some on social media that wealthy New Yorkers living in Greenwich Village were having undue influence over public space and city policy.

Some mayoral candidates criticized the officers’ actions as emblematic of overaggressive policing.

“Sending officers in riot gear and militarizing a public park should never be the answer,” said Andrew Yang, the former presidential candidate who is running for mayor. “Residents’ issues can be addressed without making the situation more dangerous.”

Dianne Morales, a former nonprofit executive and mayoral candidate, said Mr. de Blasio “must act immediately to stop this violent abuse of power and provide services to those in the park who are in need.”

In defending the officers on Monday, Mr. de Blasio said that he believed the curfew was the “right thing to do for this moment.” He said the officers wore riot gear for their protection.

“If, unfortunately, folks initiate violence towards our fellow New Yorkers or towards police officers, that has to be addressed,” he said.

Revel, the company that offers shareable electric mopeds, wants to let customers hail rides from people driving Teslas, but the city may not allow it to happen. [Gothamist]

A new survey of employers found that almost two-thirds of Manhattan workers could be back in the office by the end of September. [NBC New York]

Classmates of Justin Wallace, the 10-year-old boy who was fatally shot in front of his home in Queens this weekend, are planning a memorial on what would have been Justin’s 11th birthday . [N.Y. Post]

And finally: A mega-concert in Central Park

Brunch crowds are back. Rush-hour traffic is back. Tourists in horse-drawn carriages are back.

But the best proof that New York City has returned to its full glory may be a mega-concert in the green expanse of Central Park.

Seeking a grand symbol of New York’s revitalization after a brutal pandemic year, Mayor Bill de Blasio is planning a large-scale performance by multiple acts and has called on Clive Davis, the 89-year-old producer and music-industry eminence, to pull it together.

The show, tentatively set for Aug. 21, is still in the planning phase, with no artists confirmed. Mr. Davis — whose five-decade career highlights have included working with Janis Joplin, Bruce Springsteen, Aretha Franklin, Alicia Keys and Whitney Houston — said he is aiming for eight “iconic” stars to perform a three-hour show for 60,000 attendees and a worldwide television audience.

Mr. de Blasio said in an interview that the concert was part of a “Homecoming Week” to show that New York City is coming back from the pandemic — a celebration for residents and those in the region who might not have visited in a while.

The show would be the latest in a storied tradition of Central Park superproductions that tend to attract worldwide coverage and to paint New York as a peaceful, cosmopolitan haven for the arts. Many New Yorkers, especially the mayor, may welcome that view after the prevalence of pandemic-era images like a deserted Times Square and boarded-up storefronts amid last summer’s George Floyd protests.

On a sunny Riverdale afternoon, I took my new bicycle for a quick ride. Later, as I was riding up Broadway on my way home, an older woman with an umbrella flagged me down.

I was running late for a call, but she looked lost or maybe confused. She might need directions, I thought.

As I came to a halt, she began to smile. And then she held out a hard toffee candy.

“You’re welcome,” she said, in a language I didn’t know.