When Meir Rapaport was a child, he and his younger siblings set up tables and a makeshift oven and played at baking matzo in their home in Borough Park, Brooklyn. As a teenager he helped his great-grandfather Zacharya Brauner, along with dozens of uncles and cousins, make the unleavened bread for Passover in their backyard nearby.

This year, as Jews around the world prepare for Passover, which observes their ancestors’ exodus from ancient Egypt, Meir, now 21, helped start a bakery behind his family’s Borough Park home. Working alongside his father, uncles, cousins and grandfather, he makes ceremonial matzo for the family in a complex process that combines tradition, science and careful study of Jewish texts.

Hundreds of details must be precisely right to produce matzo for the Rapaports, followers of the Kosov sect of Hasidic Judaism, to use for their Seder. The proper wheat must be used. Water must be drawn from an underground well just after sundown. And, most important, the matzo must be made from start to finish in no more than 18 minutes, so there’s no chance of leavening. 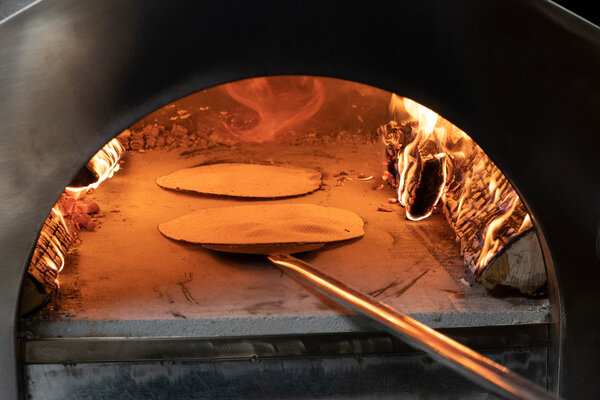 Different Jewish communities have varying traditions and practices surrounding matzo. One misstep in the process can make the bread unsuitable for a family’s Passover table, said Meir, a student at Rabbinical College Bobover Yeshiva in Brooklyn.

“Focusing on every detail, rather than buying it in a box in the store, makes for a more direct and meaningful connection when we eat it at the Seder,” he said.

Meir lit the wood-fueled brick pizza oven, and he and his uncles made sure it was heated to over 900 degrees. Then a dozen relatives stood around a table covered with butcher paper and sang Passover songs as they rolled the dough.

After every 18 minutes of production they stopped, washed their hands, cleaned the bowls and utensils of any trace of dough, and then started the process anew.

The pandemic shutdown in New York began just before Passover last year, so the Rapaports, like many American Jewish families, could not hold their traditional large Seder dinners.

One of Meir’s great-uncles died from Covid last year, shortly before Passover, and his grandfather Yosef was hospitalized for 10 days with the virus months later.

Yosef said all the adults making matzo with him this year had been vaccinated or had already had Covid.

Religious rituals, like making your own matzo, can “bring solace to your soul,” said Yosef, 66.

“If I do a commandment of God with love, I want to perform it in the most exacting way,” he said. “It brings an emotional and spiritual high.”

He has no memories of his own grandparents, who were all killed in the Holocaust. Today he has more than 40 grandchildren and one great-grandchild: Meir’s daughter, Yitta, who was born last year.

An important part of the Seder is teaching children the Passover story “to transmit our traditions,” said Yosef. “To make the matzo with my grandchildren, who are so joyful and eager to follow our ways, is better than winning the lottery.”