Vilma Carrillo was one of a group of migrant women flown to Texas in July from a detention center in Georgia to be reunited with their children, who had been separated from them as part of the Trump administration’s clampdown at the border.

Over the next several days, she watched as immigration officials paged one mother after another and took them to meet their children.

Her heart in tatters, the 28-year-old Guatemalan woman was sent back to the Georgia detention center without her daughter, Yeisvi, 11. “The others got their children back,” she said, “I was left with my despair.” She hasn’t seen her daughter since they were separated in May, but they talk on the phone twice a week.

Ms. Carrillo has been caught at the intersection of several Trump administration policies intended to make it harder for Central American migrants to settle in the United States. Her case is more serious than what thousands of other migrant families have faced: Because her daughter is an American citizen, Ms. Carrillo has been told that she could lose custody.

One cause of her dilemma, ironically, is the very reason Ms. Carrillo undertook the hazardous trip to bring her daughter back to the United States. Ms. Carrillo sought to re-enter the country with a claim of asylum, citing years of beatings she had suffered at the hands of her husband in Guatemala.

Her asylum claim was denied after the Trump administration early this year ruled out domestic abuse as legal grounds for granting refuge. Even if Ms. Carrillo agreed to go home to Guatemala, immigration lawyers said, her daughter’s status as an American citizen could prompt authorities in the United States to decide that the reports of domestic violence in the family make it too risky to allow her to return.

The fact that Yeisvi is an American citizen creates another problem: While migrant families can be placed together in family detention centers in cases where the courts rule against allowing them to go free with a bond or other restrictions, it is against the law to hold a United States citizen in one of the facilities.

Now, more than six months since they were separated, Yeisvi remains in foster care, and Ms. Carrillo is still in detention, appealing a deportation order.

“Vilma presumed the fact that her daughter is an American citizen would protect them. Instead, she is in a gray zone that could result in her losing Yeisvi,” said Shana Tabak, executive director of the Tahirih Justice Center, a nonprofit in Atlanta that provides legal services to immigrant survivors of gender-based violence. Ms. Tabak is one of the lawyers representing Ms. Carrillo.

Some 2,500 children have been returned to their parents since a federal judge ordered the government to reunify families that had been split up at the southwest border under a zero-tolerance policy.

But as the year draws to a close, nearly 100 migrant children remain apart from their parents. About half remain in shelters or foster care because the American Civil Liberties Union, which filed a lawsuit over the separations, and the government disagree over whether reunification should occur. Some parents have committed crimes, like driving under the influence, that the government contends make them ineligible to have custody of their children.

Yeisvi is in another category entirely: She is one of several American children separated at the border who arrived with a parent who was not a citizen. The federal government does not know how many such cases exist because it does not track them as a separate group. Immigrant advocates estimate there are 50 or more.

The children were transferred to state child protective services rather than to the Office of Refugee Resettlement, the federal agency responsible for housing migrant minors. It could take new lawsuits — and many months — to reunite them with their parents.

Yeisvi was born in 2006 in Vidalia, Ga., three years after her parents illegally crossed the border and settled in the onion capital, where they toiled in the fields and warehouses. In 2007, they returned to their village in Huehuetanango, Guatemala, to be with Ms. Carrillo’s ailing mother.

A few years later, Ms. Carrillo said, her husband, Juan Bernardo, began to physically abuse her. The beating, biting and other violence intensified, she said. On one occasion, he flung hot coals at her, prompting her daughter to beg him, “Please don’t kill my mom,” she recalled. He knocked out four of her front teeth, and she now wears dentures.

In May, mother and daughter fled north with the goal of returning to Vidalia, where Ms. Carrillo has a brother. She said that she had expected that coming with her daughter would protect them from being placed in detention.

The pair arrived on May 10 at the Arizona border, where Customs and Border Protection officials reviewed their documents and noticed that the girl was an American citizen. 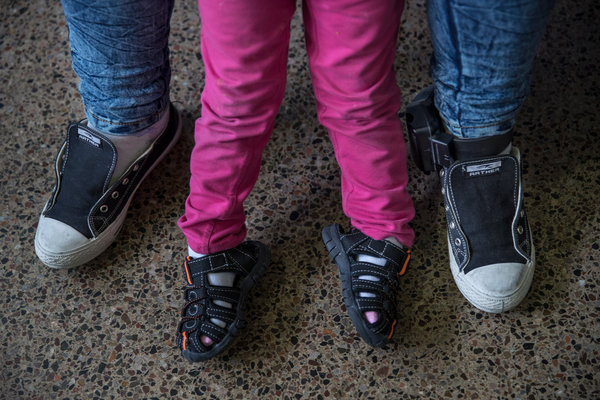 “They said that Yeisvi could not stay with me,” the mother recalled.

Hours later, when a man and woman came to take the girl away, “Yeisvi clung to me, crying and screaming. They took her by force,” Ms. Carrillo said.

In response to questions, Customs and Border Protection said in a statement that, “When a removable foreign national arrives in the United States with a U.S. citizen minor, the minor must be permitted to enter while the foreign national is processed.”

If there is no relative with legal status to care for the child, the agency said, “C.B.P. will contact state or local child welfare services to assist with appropriate placement.”

Yeisvi was transferred to Arizona’s Department of Child Safety and placed with a foster parent in Yuma, near where she and her mother had entered the country. Ms. Carrillo was taken into custody by Immigration and Customs Enforcement and eventually sent to the detention facility in Georgia.

Ms. Carrillo’s brother, Gregorio, has been fighting for her release, but cannot take in his niece because he is not legally eligible. “It makes no sense that a girl born in this country has to suffer an extended separation,” he said.

Mother and child spoke for the first time, on the phone, in June.

Rosa Fernandez, who is fostering Yeisvi in her home, said the child talked frequently of her mother’s plight. “It touches me how much she wants to be with her mother and protect her mother from the pain,” Ms. Fernandez said.

She described Yeisvi as poised and positive. She is attending school, eating well and generally thriving, Ms. Fernandez said.

During her six months in foster care, however, the girl has wondered aloud why her father hits her mother, Ms. Fernandez said. Yeisvi also has shared that he beat her when she tried to intervene to stop him from harming her mother, according to Ms. Fernandez. Ms. Carrillo has said it would be impossible to avoid her husband if she had to return to Guatemala.

In a phone interview, Yeisvi said she was happy to be in “beautiful America,” where she reported her favorite food is Quaker oatmeal and her favorite toy is a Barbie doll. She said that she had made friends, and she spoke several sentences in English, which she is quickly acquiring.

Her mood darkened when asked whether she would like to stay in the United States. “I don’t want me and my mommy to return to Guatemala. It’s that my daddy hurts…,” she began, before bursting into tears.

Ms. Carrillo appeared before an immigration judge, Earle Wilson, for an asylum hearing on Aug. 16. The interpreter spoke a different indigenous dialect than hers, compromising her ability to properly make her case. Further complicating things, Ms. Carrillo was unable to give the judge her asylum declaration and the documents detailing her abuse: They were in a backpack taken from her by federal immigration authorities when she was processed into the Georgia facility.

Her claim for asylum faced a formidable obstacle with a directive by then Attorney General Jeff Sessions in June that rendered it all but impossible for those fleeing domestic abuse, gang brutality and other violence to get protection. The American Civil Liberties Union has challenged the directive in federal court, but in the meantime, it applies; Judge Wilson denied Ms. Carrillo’s asylum claim and ordered her removed from the country.

Her lawyers appealed, a process that could take months or even years, and petitioned to allow her to be freed on humanitarian grounds in the meantime. But on Nov. 5, that request was also denied.

Two days later, in Arizona, a judge in juvenile court held an initial hearing on Yeisvi’s dependency case, proceedings that immigration lawyers say could ultimately result in the termination of Ms. Carrillo’s parental rights. In that case, Yeisvi would be taken out of foster care and put up for adoption.

“It is entirely possible that the court could terminate parental rights should the mother be deported or not released from detention,” said Michelle Brané, director of migrant rights and justice at the Women’s Refugee Commission.

“If there is a history of domestic abuse, they could decide it is not safe to send that child back,” she said.

At her foster home, Ms. Fernandez said Yeisvi’s eyes fill with tears when she asks: “Do you think I will get to stay with my mommy?”

“I tell her to pray to God,” Ms. Fernandez said, “and to keep her mother in her prayers.”