For more than a year, Vanie Mangal, a physician assistant at a Connecticut hospital, called relatives to tell them that their loved ones were dying of Covid-19, watched as patients gasped their final breaths and feared that she herself would get sick.

Ms. Mangal found no respite from stress when she went home. She is a landlord who rents the basement and first-floor apartments at her home in Queens, and for the past year, conflicts with her tenants have poisoned the atmosphere in her house.

The first-floor tenants have not paid rent in 15 months, bang on the ceiling below her bed at all hours for no apparent reason and yell, curse and spit at her, Ms. Mangal said. A tenant in the basement apartment also stopped paying rent, keyed Ms. Mangal’s car and dumped packages meant for her by the garbage. After Ms. Mangal got an order of protection and then a warrant for the tenant’s arrest, the woman and her daughter moved out.

All told, Ms. Mangal — who has captured many of her tenants’ actions on surveillance video — has not only lost sleep from the tensions inside her two-story home but also $36,600 in rental income. “It’s been really horrendous,” she said. “What am I supposed to do — live like this?”

In years past, Ms. Mangal, 31, could have taken her tenants to housing court and sought to evict them. But during the pandemic, the federal government and many states, including New York, imposed eviction moratoriums to protect renters who had lost their income. The moratoriums have been widely praised by housing advocates for preventing millions of people from becoming homeless.

At the same time, those broad protections have created tremendous financial — and emotional — strain for smaller landlords like Ms. Mangal, who often lack the deep pockets to survive without payments. And in New York City, there are a lot of those small landlords: An estimated 28 percent of the city’s roughly 2.3 million rental units are owned by landlords who have fewer than five properties, according to JustFix.nyc, a technology company that tracks property ownership.

Landlords can seek pandemic financial assistance, and the federal government has allocated $46.5 billion for emergency rental relief. But the aid has been slow to flow to property owners, and it comes with certain strings attached: It requires the landlord to allow a tenant to remain and not raise the rent for a year after the aid is received. Ms. Mangal has not applied for those reasons.

Further complicating matters for landlords, their ability to evict unruly tenants has been essentially eliminated by the moratorium.

“Some people like to say these cases are outliers, but it is more common than people think,” said Joanna Wong, a Manhattan landlord and a member of the Small Property Owners of New York, a landlord group. “I agree with the spirit of the protections, but not how they were passed. It created this situation where there is a subset of people who were not intended to be protected who ended up being protected.”

The federally imposed tenant safeguards expire this month, but New York extended a separate statewide moratorium for an additional month, through August.

New York’s housing courts are preparing to reopen for in-person hearings soon after the state moratorium is lifted, but it could take many months, and most likely longer, for the backlog in cases to clear. Even before the pandemic, an eviction case could take up to a year to be adjudicated.

Before the outbreak, New York City landlords filed between 140,000 to 200,000 eviction cases every year against tenants, who often found themselves on their own in court, without legal counsel, fighting to stay in their homes.

While most cases were resolved without a court-ordered eviction — 9 percent of the cases in 2017 resulted in an eviction, the city said — tens of thousands of New York City residents still lost their homes every year, while the rest had their names added to “tenant blacklists” shared among landlords.

Across the country, more than seven million households are behind on rent because of unemployment and lost wages, including about 500,000 in New York State, according to the census. Renters nationwide owe $5,600 on average in unpaid rent, according to a Moody’s report.

“Tenants have been living with extreme anxiety about whether they can stay in their homes,” said Cea Weaver, a tenant rights advocate and a strategist for the Housing Justice for All Coalition. “It has been psychologically traumatizing for tenants and especially for all the tenants who are parents. The tenant protections have been critical for saving people’s lives.”

Ms. Mangal never wanted to be a landlord. For years, she had lived in the upstairs unit of the house, owned by her mother, as just another tenant with her boyfriend, though she paid the “daughter discount” of $900 a month. Her mother, Ahutey Mangal, 70, collected $1,600 for the first-floor unit and $800 for the basement apartment.

Together it was enough for the mortgage, about $2,400 a month, and to pay for maintenance and unexpected repairs. Ahutey Mangal also owns three other homes on the quiet side street in South Ozone Park, a collection of rental properties that she had poured her life’s earnings into as investments for her two children.

She had never had a serious issue with a renter — until two years ago, first with the basement tenants and then when the first-floor unit opened up.

Ahutey Mangal hired a broker to list the first-floor unit and handle the paperwork. But when Rosanna Busgith connected with Ms. Mangal about the apartment, she made a series of requests that, her daughter said, should have raised red flags.

Ms. Busgith asked to exclude the broker from the leasing process and to leave the name of her husband, Phil Garnett, off the lease. And she made an off-handed remark about not working because she had received a settlement from an accident.

Last September, Ms. Busgith screamed obscenities at Ms. Mangal from the front patio, according to a recording of the episode that Ms. Mangal showed The New York Times. She accused Ms. Mangal of stealing her mail — “You are a thief, a con-girl!” she yelled — before she pulled up an oversized shirt to flash her buttocks.

The first-floor tenants remain in the unit they moved into in October 2019. They paid $1,600 a month rent for the next five months, paid half of the March 2020 payment and then stopped without warning or explanation, Ms. Mangal said. They now owe more than $24,000 in rent, she said, and more than $1,700 in natural gas bills.

While dealing with what was happening at home, Vanie Mangal was thrust into an exploding pandemic. Desperate families were rushing into the emergency room with ailing relatives. Some were immediately placed on ventilators.

Work became so consuming that Ms. Mangal said she did not realize until last summer that her mother had started to dip into savings to pay the mortgage and other bills. She immediately intervened, telling her mother she would take over managing the house full time and take on the mortgage.

Ms. Mangal notified the family from the first floor last fall that she would be suing them in housing court if they did not pay the arrears. She filed the lawsuit in December, and it is now part of a backlog of 59,000 eviction cases filed in New York City since the start of the pandemic.

In February, Ms. Mangal started a second job, working at vaccination sites across New York City, up to 13-hour shifts on her days off so she can make up for the lost rent. “I’m going to have to be supporting these people for the rest of my life,” she said. “I just don’t see an end in sight.”

The first-floor tenants did not answer the door when visited by The New York Times. In a brief telephone conversation, Mr. Garnett, Ms. Busgith’s husband, declined to answer questions, but said he would have a lawyer speak on his behalf. He refused to provide the lawyer’s name or contact information, and no lawyer has contacted The Times about the matter. 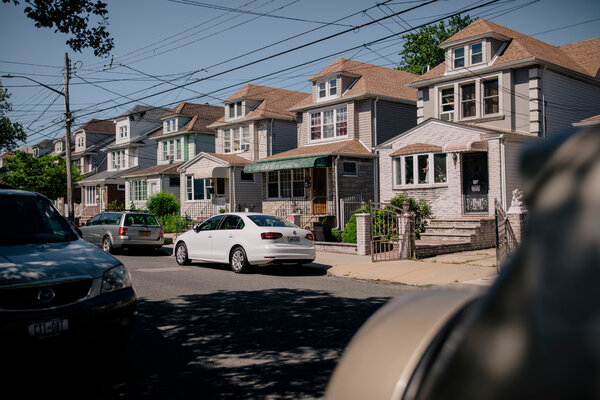 At the same time, another set of tenants, a mother and daughter who moved into the basement unit in 2016, became equally difficult in the months before the pandemic.

After a security camera caught the mother in the basement unit, Anika Mahabir, vandalizing Ms. Mangal’s S.U.V., Ms. Mangal got the protective order against Ms. Mahabir, who was later arrested.

Ms. Mahabir and her daughter left last December, after Ms Mangal agreed to drop the charges. They still owed more than $9,000 in rent. Ms. Mahabir did not respond to messages seeking comment.

“You can’t make this stuff up,” Ms. Mangal said, as she scrolled through hundreds of recordings on her phone. “The cameras were the best investment I’ve ever made. People wouldn’t believe me if I didn’t have them.”

Since the start of the new year, Ms. Mangal has converted the basement into a workout area for her and her boyfriend. In her upstairs apartment, clothing is piled high on her bed, where she has not slept for months because of the noise on the first floor. A violin and a music stand are in the living room. Ms. Mangal said she was learning to play the instrument as an outlet for the stress.

In recent months, Mr. Garnett had suggested in text messages to Ms. Mangal that he wanted to work things out between them with a mediator. Ms. Mangal found a mediator to help. But at the end of May, the mediator texted her with an update: Mr. Garnett had not responded to her messages, so she was closing the case.

Ms. Mangal said she recently received a notification from the state that the tenants had applied for assistance through a federal emergency rental relief program, but she has not yet received a payment from them.

“The stress and anxiety, the mental stuff,” Ms. Mangal said on a recent afternoon, fighting back tears on the pink couch in her living room, where she now sleeps. “It’s too much.”