He had just finished grocery shopping, but a New Mexico man got much more than he bargained for when he returned to his car in the store’s parking lot: A swarm of 15,000 honey bees had decamped in the back seat.

The man, whose name was not released, had left a window down in a Buick while he made a 10-minute stop at an Albertsons supermarket on Sunday afternoon in Las Cruces, N.M., the authorities said.

It wasn’t until he had started to drive away that he noticed that something was amiss, according to the Las Cruces Fire Department.

“Then he turned back and looked and like was, ‘Holy Cow,’ ” Jesse Johnson, an off-duty firefighter and paramedic whose hobby is beekeeping, said of the man’s reaction in an interview on Wednesday. “He called 911 because he didn’t know what to do.”

Mr. Johnson, 37, a 10-year member of the fire department and a father of two, said he had just finished a family barbecue when he got the call from the Fire Department and figured that he could safely remove and relocate the bees to his property.

“I’ll do anything to keep people from killing the bees,” he said.

It’s common in the spring for colonies of bees to split, with a swarm following a new queen to another location, according to Mr. Johnson. He suggested that the bees, which collectively weighed about 3½ pounds, might have come from a parapet, gutter system or home in a nearby neighborhood.

“Luckily, when bees are swarming, they’re pretty docile,” he said. “They don’t have a home to protect for a moment. It’s much more intimidating than it is dangerous.”

But don’t tell that to the driver of the car, who Mr. Johnson said watched him wrangle the bees from a healthy distance in the parking lot of Albertsons.

“He didn’t want to have anything to do with it,” he said. “He was worried because the car was borrowed from a friend.” 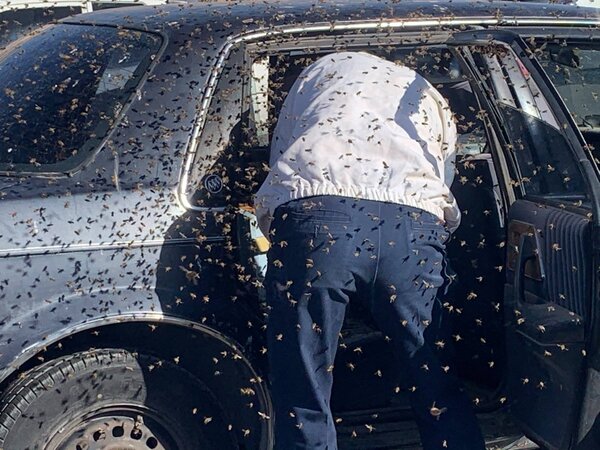 Protected by a white beekeeper’s jacket and veil, Mr. Johnson approached the car with an empty hive box that he said he had treated with lemongrass oil.

“It really mimics the scent of the queen,” he said.

While this was one of the larger swarms he has relocated, Mr. Johnson said he could have completed the delicate task in just five to 10 minutes. But he didn’t want to rush it, so he said he spent 20 to 30 minutes at the scene. He put the bees in the empty hive box and loaded it into his truck for the ride home.

The Fire Department estimated that 15,000 bees were removed.

“The meat and potatoes part was real quick,” Mr. Johnson said, adding, “I didn’t want to leave him with 1,000 bees still in his car looking for their queen.”

No major injuries resulted from the encounter, according to the authorities, though they noted that a supermarket security guard and at least one firefighter were stung.

“One guy got stung on the lip, and we made fun of him the next morning,” Mr. Johnson said.

A representative for the supermarket chain Albertsons declined to comment on Wednesday and referred inquiries to the Las Cruces Fire Department.

Fire Chief Jason Smith of Las Cruces said in an interview on Wednesday that Mr. Johnson had distinguished himself as an emergency responder.

“He was definitely willing to come down and help out the crew,” Chief Smith said.

The Fire Department ordinarily doesn’t remove bee swarms, but Chief Smith said that because the bees were in a relatively high-traffic area and were docile, it made sense for Mr. Johnson to remove them.

“We take a more patient or deliberate approach to try to let the bees do what they need to to find a new home,” he said.

Mr. Johnson said he had four hives at his home and had had as many as 12. His efforts on Sunday will come with a sweetener, he said: honey.