For the past few months, my colleagues have worked on a sweeping project on the state of American education. They wanted to address a simple question, said James Dao, a national editor at The Times who oversees education coverage: “Are American children getting adequate schooling in the pandemic?”

“It is the most basic of questions,” he continued. “And yet in a country with 13,000 self-governing school districts setting 13,000 educational policies, one that is impossible to answer.”

Inconsistency and disruption have been the only constants. Nearly every district in the U.S. has had to forge its own way and use its own safety standard; the Trump administration and the federal government provided little guidance or data.

So instead of trying to take a numbers-driven approach, James said, “we set a more humble ambition for ourselves: to provide snapshots of seven districts that, together, provide a cross section of America in all its diversity.”

Some students have been in school buildings since the fall, while others haven’t seen a classroom since March 2020. Some split their time between remote and in-person instruction. There is only one common link: However students are learning right now, it has been a hard time for everyone.

But not everyone has struggled equally. Districts serving high percentages of nonwhite or poor students were significantly more likely to remain fully remote this fall. Many reported higher proportions of students failing classes, which many critics have reframed as classes that failed students.

“We believe these snapshots bring us closer to understanding how educators, parents and students are navigating what has arguably been the most disrupted school year since World War II,” James said.

Here’s a condensed version of each district profiled, but we strongly suggest you read it in full. 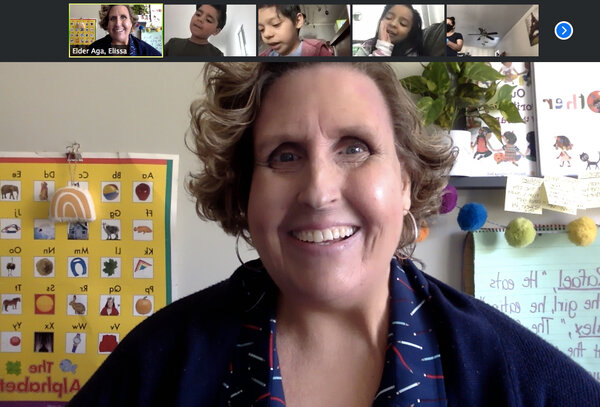 Most students in the Los Angeles Unified School District, the nation’s second largest, have not been in classrooms since March. Now, high rates of virus transmission and overwhelmed hospitals dominate headlines. The majority-Latino district will keep learning remotely for the foreseeable future.

“There is just no question this is disproportionately hurting students who can least afford it,” he said.

In August, schools opened in Cherokee County, Ga. to crowded hallways, packed football games and optional mask requirements. Contagion was swift: Within the first two weeks, nearly 1,200 students had to quarantine in the majority-white, Republican-leaning district outside Atlanta.

Many parents said that their children benefited from attending school in person. But by mid-December, more than 1,000 students and staff members had tested positive. After winter break, the entire district closed for at least two weeks because there were too many teachers in quarantine.

“This is what you get when you don’t try to protect the people in the schools,” said Lizzy Palermo, 17, who said she was one of few students to consistently wear a mask.

After starting classes virtually, the school board bowed to community pressure and voted to open schools to students in November — just as the pandemic was surging across the state. Tensions flared.

“She didn’t swear at me, but she yelled,” one member of the school board remembered, after a parent harassed her. “I had to call the police.”

Since in-person classes began, hundreds of students and staff members have moved between in-person and remote learning, after possible exposures.

Students in the District of Columbia Public Schools, a majority Black district, haven’t learned in classrooms since March. Many are “chronically absent” — they rarely log in to class.

The impact on learning is starting to show: A recent study of assessment scores this fall found students were, on average, four months behind in math and one month behind in reading. Black students had even more distance to cover.

At one public charter school, teachers make house calls to try to find missing students. “We try to let them know we’re not focused on judging,” a teacher said.

This summer, Gov. Gina Raimondo of Rhode Island deployed the National Guard to help reopen schools for in-person learning. Remote teaching would disadvantage nonwhite and low income students and that was not an option, she said.