REYNOSA, Mexico — For nearly three years under the Trump administration, a makeshift camp of migrants from all over the world operated in the Mexican city of Matamoros. It was effectively the first refugee camp on the U.S.-Mexico border, packed with people hoping to win asylum in the United States but forced to wait in Mexico while their cases were being considered.

The camp, a painful sign of the human cost of the previous administration’s hard-line immigration policies, was bulldozed in March. With the election of President Biden, many of its residents were allowed into the United States; others were housed safely in shelters in Mexico. Its demise seemed to signal an important move toward what Mr. Biden promised would be a new, more humane era along the border.

But within weeks, a new camp sprang up about 55 miles farther west, in the Mexican city of Reynosa, and this one, aid workers say, is far worse than the one at Matamoros ever was. Overcrowded already, with more than 2,000 people, it is filthy and foul-smelling, lacking the health and sanitation infrastructure that nonprofit groups had spent months installing at Matamoros. Assaults and kidnappings for ransom are commonplace. 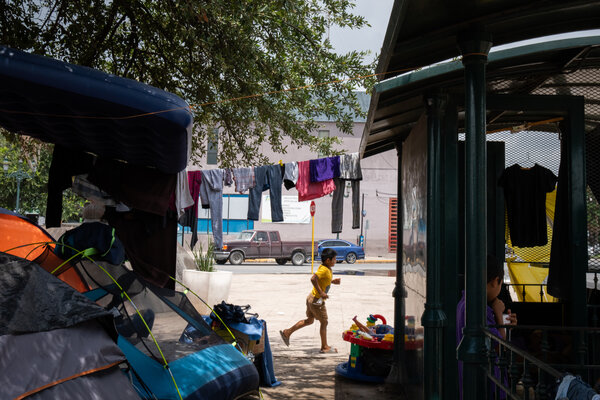 The reason: Though Mr. Biden moved quickly to rescind the Trump administration’s “Remain in Mexico” policy for asylum seekers, it left in place an emergency health order that calls for Border Patrol agents to immediately expel most migrants who cross the border, regardless of whether they try to request asylum. And on Monday, the U.S. Supreme Court refused to block a court order directing the government to reinstate the “Remain in Mexico” policy, increasing the likelihood that other, similar camps will spring up along the border once again.

“Reynosa is Matamoros on steroids,” said Chloe Rastatter, co-founder of Solidarity Engineering, a nonprofit trying to improve infrastructure in the camp. “Conditions in the Matamoros camp made it a palace in comparison.”

Every last patch of the plaza near the border bridge to Texas is covered over with a jumble of tiny tents and tarps. The small humanitarian organization has connected a short city water line, but it is not enough. There is only one hand-washing tank, whose spigots often run dry. There is not enough drinking water, which is trucked in. Nor are there showers.

Underfunded nonprofits and private donors are struggling to provide everything from toilet paper and disinfectant to food and medicine to the migrant families in the camp.

Like the migrants in Matamoros, virtually everyone in the Reynosa camp was expelled back to Mexico, under an emergency public-health measure introduced by former President Donald J. Trump, and still in effect, to prevent the spread of the coronavirus.

“Under Biden, people are still being returned and getting stuck,” said Charlene D’Cruz, the director of Project Corazon, which provides free legal services to vulnerable migrants. “The border is not really any different.”

The Biden administration has said it will comply with a Texas judge’s order to reinstate the “Remain in Mexico” program, officially known as the Migrant Protection Protocols, or simply M.P.P. But it is not clear whether Mexico will agree to officially cooperate with the United States to house migrants who are awaiting a decision on their asylum petitions.

In any case, the majority of migrants crossing the border without authorization are being immediately expelled back to Mexico under the pandemic-related health order, regardless of their asylum status, though large numbers of unaccompanied children and many families have been allowed to enter.

In their so-far-successful court challenge to the “Remain in Mexico” policy, the states of Texas and Missouri argued that terminating the program encouraged human smuggling and would leave the states burdened with the costs of providing services to a surge of unauthorized immigrants.

Chad Wolf, who was the acting Homeland Security Secretary under the Trump administration, applauded the Supreme Court’s decision, saying the “Remain in Mexico” policy had stemmed a surge of migrants at the border and helped control “the unprecedented flood of fraudulent asylum claims.”

The current leadership of the Department of Homeland Security said it would begin implementing the program again while continuing to “vigorously challenge it” in court on appeal. “D.H.S. remains committed to building a safe, orderly, and humane immigration system that upholds our laws and values,” the agency said in a statement.

More migrants are arriving every day in Reynosa, most of them deposited in the city by American border agents who intercepted them after they crossed the Rio Grande on a raft.

Human smugglers in recent months have channeled tens of thousands of families to Tamaulipas, the state where Reynosa is, and sent them across the river to reach McAllen, Texas. In late July, the Biden administration began placing migrants on deportation flights if asylum officers posted at the border found that they would be unlikely to win their asylum cases, but it was still not clear whether the policy would deter other migrants from coming.

Many of the migrants in Reynosa have fled violence, deprivation and threats to their lives. After undertaking weeks- or monthslong treks over land to come this far, most say they are disinclined to turn back. So they endure tents that leak when it rains, survive on food handouts and wear donated clothing.

The poor hygiene conditions are causing people to fall ill from preventable illnesses. Chickenpox has spread among children.

“We see Covid, gastrointestinal ailments from lack of clean water and a ton of infections — eye, wound, bladder,” said Andrea Leiner, a nurse practitioner with Global Response Management, a medical nonprofit that has been seeing 100 patients a day under a tent.

“Our patients are regularly victims of assault and kidnapping,” Ms. Leiner said.

Last week, Mexican authorities swept through the camp by night and confiscated gas cylinders used for cooking, whipping up rumors that the camp would be shut down. But the shortage of shelter space and rampant crime in Reynosa make it unlikely that the migrants will be forcibly displaced.

Since the first tents were pitched in April, a semblance of an organized community has begun to take shape.

On a recent morning, a pastor climbed out of a van and a crowd quickly gathered around him to join in prayer.

A sanitation crew, overseen by a Guatemalan migrant named Jimmy who hopes to make it to Cleveland one day, tried to keep a row of portable latrines cleaned. The volunteers wore latex gloves and clutched bottles of Comet cleanser.

A kitchen crew distributed meals dropped off by churches to people who ate in shifts at tables under a white tent. A barber gave boys crew cuts to fend off lice, enveloping them first in a cape of red, white and blue. Children cackled as they tried to ride a rickety tricycle around the plaza’s perimeter without running anyone over. Everyone was baking under the searing summer sun.

The residents were united by trauma, loss and their hopes of reaching places like Alabama, Florida and Oklahoma, to name a few.

Maricela, 63, had crossed into Texas with her granddaughters, 11 and 14. But after they were processed by the U.S. Border Patrol, the girls were separated from their grandmother and placed in the custody of the federal government. Maricela was bused back to Mexico because she was not their parent.

Now she sat sobbing at a plastic foldout table in one the camp’s improvised dining areas.

“I am the one who cares for them,” said Maricela, who like other migrants shared only her first name because of safety concerns.

The three had fled El Salvador because gang leaders had attempted to recruit the girls as sexual targets, she said. Now, she found herself equally helpless to defend them. “I want to be with my granddaughters,” she said.

Fellow migrants, most of them complete strangers, tried to console her. A woman handed her a Bible with a blue cover, then quietly slipped away. Robert, 33, caressed her shoulders. Glenni, 21, fanned her with a kitchen rag.

Several people said that they had tried to make a case for asylum to U.S. Border Patrol agents, but the agents would not listen. They were told, they said, to just answer questions and follow directions.

Within hours after arriving in the United States, these migrants said, they had been escorted to a bus that brought them back to Mexico.

Lenore, 36, a migrant from Honduras, had been certain she would get in. Her husband had crossed the border two years earlier with their daughter, Jacobel, now 9, who has bone cancer, and settled in Oklahoma. She brandished a photograph of her ailing little girl.

“I can’t comprehend why they wouldn’t let me pass,” she said, sitting on an aluminum blanket where she has been sleeping against the pink backpack that contains everything she possesses.

Nearby, inside a tent, Alma, 43, held her daughter, Alyson Sofia, 9. They too had been returned. Alma said that she had run a food stall in Honduras, but the business became unsustainable with a steep “war tax” charged by gangs. She and her daughter have twice been expelled by U.S. authorities, but she was still hoping to make it to Indianapolis, where family members who had helped pay for their journey were ready to receive them.