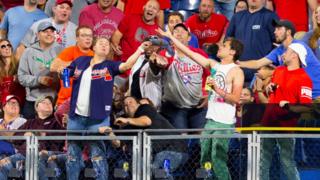 Two recent incidents of fans being injured by rogue baseballs during Major League games have reignited a debate about safety. So what’s the solution when it comes to game-time accidents that have seen some fans disabled or even killed, asks Jonathan Berr.

Despite the Houston Astros’ success this season, watching them play at Minute Maid Park has been a painful experience for some.

In May a ball hit by Chicago Cubs outfielder Albert Amora Jr struck a two-year-old girl. Another ball flew from the bat of Astros slugger Michael Brantley on 13 October and hit paramedic Brian Cariota. Both players were horrified by the accidents.

According to US media reports, the girl is recovering at home and Cariota is expected to leave the hospital in a few days.

A recent investigation by NBC News found more than 800 reports of fan injuries Major League Baseball (MLB) games between 2012 and 2019.

For decades MLB has warned fans on game tickets about the danger of getting hit by baseballs flying into the stands – some of which can travel at over 90mph (150km/h). Fans can swap their tickets for less exposed seats.

There are also signs in stadiums about the risks from batted balls and from bats that slip out of players’ hands.

But Bob Gorman, author of Death at the Ballpark, a book that chronicles how teams deal with fan injuries and deaths, argues that baseball is downplaying the risks from foul balls – the term is used to describe any baseball that isn’t in play, even those that don’t wind up in the stands where fans are seated.

“I just do not think they want that information out there,” Gorman told the BBC.

“If people knew how serious the problem was, there’d be an outcry about it. Their concern, in my opinion, is financial.”

An MLB spokesman declined to comment for this story.

Data compiled for NBC News by the Elias Sports Bureau shows the average number of foul balls per game hit 53.8 in the first half of the 2019 season, the most in 20 years.

Elias pegs the average number of home runs per game at around 1.31. Unlike home runs, which also wind up in the stands, foul balls don’t count toward a team’s score.

Baseball teams enjoy broad legal protection from lawsuits thanks to the disclaimers on game tickets and stadiums. But the rise of social media has spurred image-conscious teams to action and players are also speaking out.

Since the May accident in Houston, 13 teams have announced plans to extend netting protections in their stadiums. Other teams are expected to make similar announcements in the coming months.

“We’ll evaluate where we are after we give clubs an opportunity to make those changes on their own,” Baseball Commissioner Rob Manfred told the Michael Kay Show radio programme. “We have made a ton of progress on this issue in the last four or five years, and we will continue to make progress.”

Unfortunately, distractions abound at ballparks, including digital scoreboards and screaming vendors that roam the stands. There is even the MLB Ballpark app, advertised as a “mobile companion when visiting your favourite Major League Baseball ballparks”.

Dwayne Sowa is among the fans who have suffered gruesome injuries.

He was struck in the head by a foul ball at Philadelphia’s Citizens Bank Park in 2014 while buying a beer from a vendor. His wife Kelly heard the sound of his skull cracking.

“It was the worst sound she has ever heard,” Sowa told the BBC, adding that he was embarrassed at first because he had failed to catch the ball.

Sowa was in hospital for 10 days and underwent surgery to reconstruct his forehead.

He received two tickets to a game and an autographed baseball signed by Phillies’ second baseman Jimmy Rollins, who was responsible for the ball that struck Sowa. He met Rollins and has no ill will toward him.

The 49-year-old left the game early because he could not stand the noise. He has received no monetary compensation for the accident, which Sowa says has left him unable to work. He suffers from “rage issues” and currently receives federal disability payments.

“They signed my ball but wouldn’t sign the check for my surgery,” he says.

The Phillies haven’t apologised or inquired about Sowa’s well-being, he claims. When his story appeared on the NBC TV, the Phillies announced plans to extend the netting in Citizens Bank Park by the start of 2020 season.

According to Gorman, Sowa’s situation is far from unusual.

“There are both physical and psychological consequences for fans severely injured by balls or bats,” he says.

“Oftentimes they are left with injuries such as the loss or distortion of vision, recurring severe headaches, permanent scarring, and so forth. I know of some who have lost an eye, for example.”

To be sure, many fans enjoy the hunt for a foul ball. They will bring baseball gloves to games to catch them. Stadiums will erupt in thunderous applause if someone makes a particularly good catch. Conversely, fans will boo people if they bungle a catch.

Zach Hample, an author of three books on baseball, has mixed feelings on the sport’s safety push. While he supports the need to protect fans from potentially dangerous balls, he argues that the additional netting is making it harder for fans to interact with players.

“A lot of people are really, really not happy about it,” said Hample, who owns a collection of over 6,000 baseballs and offers tips for souvenir hunters on his YouTube channel.

“It’s not just the collectors but casual fans too. The netting is very intrusive. Teams always say that it’s easy to see through the netting. It’s not.”

Writer Jayson Stark from US sports website The Athletic also is concerned that enhancing fan safety could affect the relationship between fans and players.

“Will this change the fan experience? Of course, it will,” says Stark.

“We’ll miss those moments where first basemen are running off the field after the third out of an inning and hand a baseball to a kid.

“We’ll miss those moments where the ball girl or ball boy down the left-field or right-field line scoop up a foul ball and can just hand it to a kid. Those are special, lifelong memories, and I do have a pang of sadness that they’ll become a thing of the past.”

The changes, though, are needed, Stark believes.

“Fan safety has to be this sport’s top priority. So whatever it takes to make that happen, that’s what has to be done.”