NASHVILLE — Nashville did not need another test of its grit. Over the years, the city was strong after the Cumberland River surged beyond its banks, and it clawed its way back from tornadoes.

But this year has been nothing but tests. There was another tornado, this one ripping a trail of devastation in parts of the city that had been at the center of Nashville’s boom. And the coronavirus: It has nearly claimed a tourism industry that had been thriving, and it took John Prine, the singer and songwriter who was a beloved figure in the city.

Then, in the final days of an awful year, in the quiet of Christmas morning, a man bent on mass destruction drove an R.V. loaded with explosives into the heart of Nashville’s downtown.

“One more event in Nashville’s 2020,” the mayor, John Cooper, said in a news conference hours after the explosion on Friday. In an interview the next day, he added, “We’ve seen dark days, but we’re digging deep.” 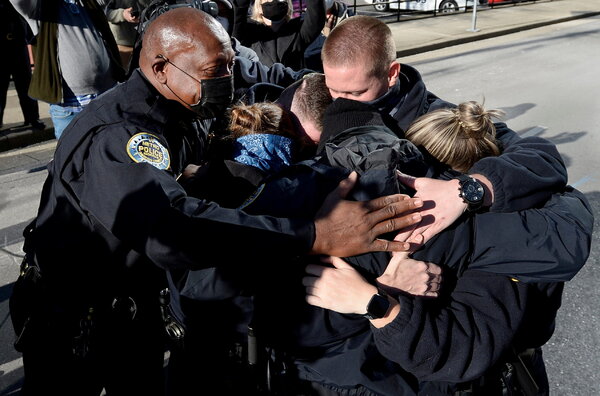 There was a measure of relief in the immediate aftermath of the bombing: No one died other than Anthony Warner, whom investigators identified as the perpetrator.

But the explosion inflicted physical and emotional wounds: Three people were injured and there are fears that some of the damaged buildings, among the oldest in Nashville, cannot be restored. Parts of downtown have been reopened, but the area directly around where the explosion occurred on Second Avenue remains closed. One building has already collapsed. Others still stood but were largely gutted. Metal, wood, wires and brick filled the avenue.

Many residents have also been unsettled as officials debated whether the attack met the threshold to be considered terrorism and investigators sought to understand the motivation behind the bombing.

“We don’t know for sure that we’ll ever get to the complete answer,” David Rausch, the director of the Tennessee Bureau of Investigation, said on Monday on NBC’s “Today” show.

For years, Nashville has been in the midst of an upswing, with construction cranes dotting the skyline. The population has soared, as have home prices. Nashville takes pride in its regular place atop lists of friendliest cities, and it has become known for a certain can-do attitude. But for some, it feels like that resolve could be nearing its limits.

“It’s so hard to keep pushing,” said Trey Cioccia, who runs the Black Rabbit and Treehouse restaurants, where business is down 80 percent from last year. “But we do it for our staff, neighbors, partners, our livelihood.”

Of course, Nashville is not alone in having a year to forget. In many places, 2020 has amounted to a pileup of staggering hardship and loss. In California, the pandemic compounded one of the worst wildfire seasons the West Coast has endured; in Louisiana, it was serial hurricanes — including one of the most powerful to hit the state — on top of being one of the earliest hot spots for the virus.

Nashville has been rebuilding after the tornado in March, which killed two people in the city. In the North Nashville, East Nashville and Germantown neighborhoods there are still churches missing parts of their roofs and businesses reduced to rubble. Attaboy, the East Nashville bar where the two people killed were employees, opened again for the first time in October.

Then in May, a rare line of thunderstorms known as a derecho blustered through Nashville, knocking out electricity while shredding trees and utility poles.

Now, Nashville is among the metropolitan areas with the greatest number of new coronavirus cases, relative to its population, in the last two weeks. Measures to curb the virus have also been the cause of acrimony. Bar owners downtown have pushed back against public health orders, arguing that such restrictions have eviscerated their businesses.

Nashville had enjoyed substantial tourism growth in the last decade, with the number of visitors rising to 16.1 million in 2019 from 10 million in 2010, according to the city’s convention and visitors bureau.

Phil Martin, who owns several downtown bars, said one of them sustained window damage in the blast. But, in some ways, the pandemic has caused more harm. The team of 60 employees he had before the virus has been nearly halved.

He said that he was not bringing in enough business to cover his property taxes, and that his earnings were down nearly 70 percent compared with 2019, one of his best years. On most Christmas nights, his bars draw large crowds — and good tips. But not this year.

“They are really hurting,” Mr. Martin said of workers and musicians. “We have really nice people on both sides, both staff and musicians, who can’t pay a $60 water bill.”

The motto “Nashville Strong” emerged after floodwaters spread through the city in 2010, as some 19 inches of rain fell in some places and an engorged Cumberland River spilled over, swamping homes and businesses and killing 11 in the Nashville area.

The phrase appeared on T-shirts and caps and in a mural that became a popular backdrop for Instagram posts. But many in the city embraced it as more than a slogan. “Nashville strong is actually a thing,” said Mr. Cooper, who took office last year and in that time has done 90 public information sessions with the Office of Emergency Management, more than all of his predecessors combined. “We’ve had to demonstrate that this year.”

Ralph Schulz, the president of the Nashville Area Chamber of Commerce, recalled how many businesses imperiled by the flood were able to survive with help from competitors: Bakeries, offices and even industrial businesses shared space until damaged facilities could be repaired.

“And in this case, again, you’ve got an isolated geographic area that’s heavily hit and you will see the rest of the community form around those businesses and help them as much as possible,” Mr. Schulz said. “It’s very important as a part of Nashville’s brand that Second Avenue be a vibrant and vital place.”

Yet achieving that could be a monumental undertaking.

The bombing tore through a row of old warehouses that date to the Victorian era, built along the river near where steamboats docked. “They talk about rebuilding,” said Elizabeth Mayhall, a historic preservation advocate, “but there’s really no way to replace these.”

When she arrived in the neighborhood in 1984, many of those buildings were vacant. Over three decades, the area was gradually revived, as restaurants, bars, shops and other businesses started moving in.

She looked at photographs of the devastation and the street was almost unrecognizable. All of the work that had been done to rejuvenate the old buildings had been undone in a flash. “Man, I’m feeling it pretty deeply,” she said.

“I like to call it the heart and soul of Music City,” Ms. Mayhall said. “That one little intersection between Broadway and Second Avenue is the epicenter of Nashville.”

But in a different sense, there was a hope that Nashville would be buoyant, relying on the city’s endurance through other troubles as a guide. “I like to think this city as a whole can get through anything,” said Marcus Dixon, who saw the tornado’s damage through his work in a hardware store.

Melissa McKittrick, a resident physician, recalled the support from friends and colleagues after she lost her possessions in the tornado. “I think there’s a lot of heart in the city,” she said, “and I think a lot of people are proud to be here.”

Taylor Harris, 38, has closely felt the year’s wrath. The restaurant and bar in the Nashville Farmers’ Market where he worked had to shut down after tornado damage in March.

Just two weeks later, he was sent home again because of the pandemic. When the bar reopened in July, he returned, but there were not enough customers and he has not been back since. The bombing was one more thing to stomach.

“We’ll get through it,” he said, “just like everything else.”