In New Jersey, voters slashed the number of Republicans in Congress from five down to two, and possibly only one.

And in the six other states in the Northeast, the lone remaining Republican congressman, Representative Bruce Poliquin of Maine, was clinging to his seat on Wednesday, his fate to be decided by the second choices of third-party voters through ranked-choice voting.

If the country delivered a mixed verdict nationally on Mr. Trump and his brand of unrepentant nationalism and white-hot rhetoric on immigration in the 2018 midterms — Democrats seized the House and ceded ground in the Senate, and the two parties split key governorships — the federal results were far clearer in a region that once defined moderate Republicanism in America.

“This was a wipeout for Republicans in the Northeast,” declared Christopher H. Shays, a former moderate Republican congressman from Connecticut who lost his own re-election a decade ago.

From a tax bill that penalized high-tax blue states to a message far more attuned to the ears of rural America than the cities and educated suburbs that dominate the Northeast, Mr. Trump accelerated and hardened a regional realignment that has been underway for years. Almost no Republicans appeared immune to the region’s shifting political winds, no mater how they positioned themselves.

Representative Claudia Tenney made appearances with no less than four members of the Trump family in an upstate New York district that the president carried in 2016. She lost. In northern New Jersey, Representative Leonard Lance voted against the final repeal effort of the Affordable Care Act, voted against the tax bill and was openly critical of the president’s immigration policies. Mr. Lance even avoided mentioning Mr. Trump by name. He lost, too. 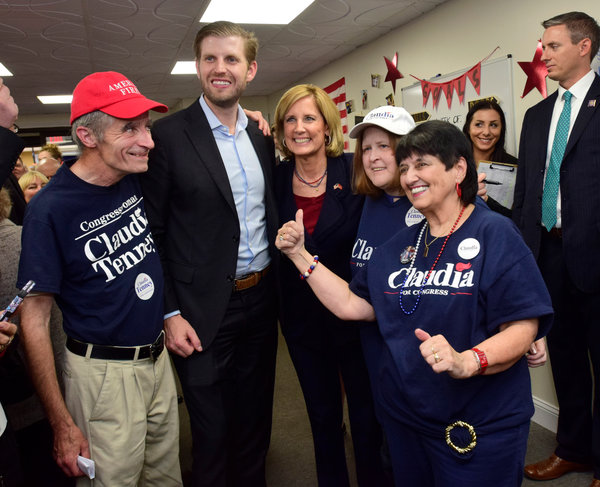 Of the 60 congressional races on Tuesday in eight Northeastern states, including New York and New Jersey, not a single Republican is on pace to top 57 percent of the vote ballot. The party ceded six seats — more than one-third of their overall total — and of the nine remaining Republican-held seats, two incumbents were leading with less than 50 percent of the vote.

Not long ago, Republicans held half of New Jersey’s 12 congressional seats; now they are possibly down to just one, with Republican Representative Tom MacArthur trailing his Democratic challenger, Andy Kim, by roughly 2,600 votes. Yet regardless of that race’s outcome, Republicans in New Jersey are facing their smallest representation in Congress since President Woodrow Wilson.

At the state level, New York Democrats celebrated historically large wins in the Legislature, where the party took complete control.

Some Republicans did win re-election in suburban areas, including Representatives Lee Zeldin and Peter King on Long Island, though their shares of votes, 52.5 percent and 53.3 percent, respectively, were smaller than in the past.

Mr. King had warned Republicans late last year that the tax bill would harm them in the Northeast, talking about a suburban “tsunami” in high-tax states on Fox News. He opposed the tax bill even as he remained largely allied with Mr. Trump, who called Mr. King a “hardworking gem” on Twitter on Election Day.

The morning after the midterms, Mr. Trump made explicit that there would be little space for those Republicans who distance themselves from him. “Those that worked with me in this incredible Midterm Election, embracing certain policies and principles, did very well,” he wrote on Twitter. “Those that did not, say goodbye!”

At a news conference, the president openly mocked those he deemed disloyal Republicans. “Mia Love gave me no love and she lost,” he said of one Utah Republican. “Too bad. Sorry about that Mia.”

Mike Duhaime, a Republican strategist in New Jersey who has worked on national campaigns, said his fear is that “we’re shrinking ideologically as a party — and that’s a problem.”

Nowhere was the fracture with the Trump-led Republican Party more potent than in a swath of wealthy suburban enclaves in the northeastern part of New Jersey, where Mikie Sherrill, a former Navy helicopter pilot and federal prosecutor, defeated her Republican opponent by more than 12 percentage points. It was a stunning margin in a seat that had been held for 24 years by Representative Rodney Frelinghuysen, a genteel, moderate Republican deal maker who rose to become the powerful chairman of the Appropriations Committee. The district had not elected a Democrat since President Ronald Reagan’s administration.

Ms. Sherrill’s victory was one of seven for Democrats along the so-called Acela corridor between Washington and New York: one in Northern Virginia, three in the Philadelphia region, three in New Jersey and one in New York City. In New York, Max Rose, a 31-year-old military veteran, ousted Representative Dan Donovan in a district centered on Staten Island, long a Republican stronghold and where Mr. Trump had remained relatively popular.

John McLaughlin, who served as a pollster for Mr. Trump in 2016 and who was involved in House races in 2018, blamed Republican congressional leaders more than the president for the losses in the region, citing the tax bill in particular as “a policy mistake that hurt many Republicans in the Northeast and others in high-income suburbs.”

While the measure cut taxes across the board, it placed a cap on the popular state and local tax deduction that is heavily used in the wealthier parts of high-tax states like New York and New Jersey. “The tax cut was good policy to grow the economy and create jobs, but when Republican leadership refused to negotiate a higher cap or phase it out over time, it made many suburban Republicans vulnerable,” Mr. McLaughlin said.

During the Trump era, Republicans have still succeeded in holding blue-state governorships — including G.O.P. re-election victories by incumbents in Massachusetts, Maryland, New Hampshire and Vermont on Tuesday — but voters have long treated federal contests differently from state ones.

Christine Todd Whitman, a former Republican governor in New Jersey, said the party’s woes were trickling all the way down the ballot into local contests. “We even lost in a lot of the county and municipal races that were in solid Republican districts,” she said.

“For the Northeast,” she said, “it’s going to be hard for Republicans to claw back.”