When Representative Nicole Malliotakis voted to overturn the 2020 presidential election results, despite no evidence of widespread voter fraud, constituents and local Democrats protested outside her New York office.

An editorial in her local paper, the Staten Island Advance, said she “let America down.”

On Monday, a new political action committee — NICPAC, or Nicole Is Complicit PAC — raised more than $20,000 within four hours of launching its website.

But Ms. Malliotakis unseated Max Rose, a Democrat, this past November in no small part because of her allegiance to former President Donald J. Trump, who endorsed her. The congresswoman has continued to stand firm with the former president’s base, even if that means leaving others behind.

She said her loyalty was to New York’s Republicans, but especially to the narrow, conservative pocket of New York City — a swath of Staten Island and a portion of Brooklyn — that made her the only Republican elected to Congress from the five boroughs.

“There’s more of a burden on me now to hear their voice,” Ms. Malliotakis, 40, said in an interview. “They want someone who is going to fight to be better, who is going to bring their perspective to the forefront, who is going to push back when policies are being proposed that will hurt them or cost them money or make their lives miserable.”

Her stance could alienate the majority of New York voters, overwhelmingly Democratic, whom she needs to rise to higher office — or it could cement her place in New York politics as a rare Republican voice. Though there are more registered Democrats on Staten Island, which makes up the majority of Ms. Malliotakis’s district, Republicans registered far more new voters during the Trump administration than Democrats did, creating an invigorated, Trump-loving base that Ms. Malliotakis plays to. 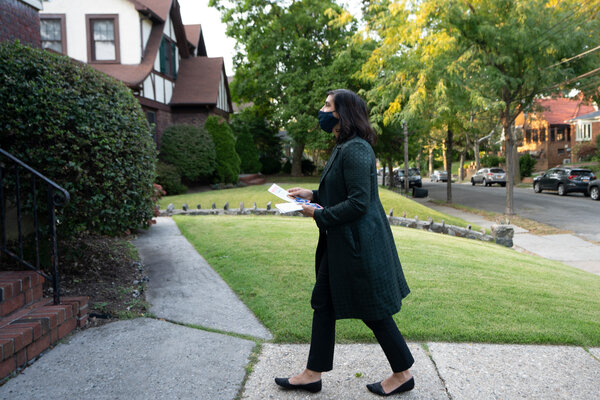 But if she runs again in 2022, Ms. Malliotakis may face a completely different playing field. Congressional districts will be redrawn following the results of the 2020 census. New York could lose up to two congressional seats, decreasing its representation in the House from 27 people to 25, according to a prediction by Election Data Services, a political consulting firm.

New York’s 11th District, which Ms. Malliotakis represents, is likely to extend deeper into Brooklyn or into Lower Manhattan, picking up more Democratic voters and putting her seat in jeopardy.

On Thursday night, Ms. Malliotakis was one of 11 House Republicans who voted to strip Representative Marjorie Taylor Greene of her committee assignments for inflammatory rhetoric, including promotion of a conspiracy theory that doubted the veracity of the Sept. 11 attacks and one that blamed California fires on a laser controlled by a Jewish family. In a tweet, Ms. Malliotakis called the remarks of Ms. Greene, a freshman Republican from Georgia, “hurtful to thousands of 9/11 responders, our Jewish community and many others in my district.”

Still, some residents have been so unnerved by other events of Ms. Malliotakis’s nascent term that they are already plotting for her removal. NICPAC officially launched on Monday, establishing itself as a bipartisan watchdog organization of constituents both outraged over her decertification vote and disappointed in her lukewarm response to the Capitol riot. (Ms. Malliotakis’s statement condemned rioters and thanked the law enforcement officers.)

The group plans to buy ads and conduct outreach to Ms. Malliotakis’s constituents, in order to “keep her accountable,” said Jonathan Yedin, a Democratic political operative and founding member of the PAC.

“Some of us voted for her, some of us didn’t, but we’re all united in the message that she’s unfit to serve, given her actions,” Mr. Yedin said.

Dan Hetteix, host of Radio Free Bay Ridge, a progressive politics podcast based in the 11th District, said Ms. Malliotakis had to try to secure her base to fend off opposition.

“She needs to keep these new voters engaged in a ticket that doesn’t have Trump on it anymore,” Mr. Hetteix said. “She needs to make the most of Staten Island’s red voters. The more she can whip them up, the more she can resist whatever redistricting does to her.”

Ms. Malliotakis defended her vote not to certify the presidential election results in a tweet, citing a desire to investigate “unconstitutional rule changes, irregularities and alleged fraud.”

Peers find her ambitious, hardworking and sharp, and she has positioned herself as the antidote to the state’s far-left politicians. The congresswoman has even joined the “anti-socialist squad,” to counter a fellow New York representative, Alexandria Ocasio-Cortez, and “the Squad.”

Ms. Malliotakis is as much against unauthorized immigration and universal health care as she is in favor of strengthening bail laws and protecting father-daughter dances. But some local Democrats say that she’s a reactionary ideological flip-flopper.

“She is someone who has changed everything she’s believed in every time she’s ever run for office,” said Kevin Elkins, a longtime adviser to Mr. Rose, whom Ms. Malliotakis defeated in November.

Mark Murphy, a local businessman and former Democratic congressional candidate in the district, said he wants Ms. Malliotakis to move to the middle to better speak for all residents. “I want her to dial back the hard-core conservative ideology that is driving her, and think about who we, as a community, really are,” Mr. Murphy said.

But Staten Island tends to vote Republican. In 2016 and 2020, it was the only borough in New York City that Mr. Trump won. Her base is expecting her to represent the sentiment of Trump voters in the district.

In an interview, Ms. Malliotakis praised the successes of Mr. Trump’s term, proof, in her eyes, that he deserved to be re-elected: improved health care for veterans, low unemployment numbers, renegotiated trade deals. “People didn’t even know about the good things because the other side has been so busy criticizing him and trying to impeach him and investigate him over the four years, which I think was very unfair,” she said.

Some believe that Ms. Malliotakis’s vote simply represented the wishes of a district that wanted to see Mr. Trump re-elected.

“I really do believe she had a mandate from her constituents, who also overwhelmingly voted to support Trump, to object to the election results, as well as vote against impeaching the president,” said Peter Giunta, president of the Staten Island Young Republican Club.

Allan Katz, a financial planner on Staten Island, voted for both Ms. Malliotakis and Mr. Trump last November. “Max Rose, when he was in office, voted for impeachment when most of his constituents wanted him to vote against it,” said Mr. Katz.

Some of her supporters believe she is making all the right moves.

“Number one, she is a rising star,” said Mike Long, the former chairman of the Conservative Party of New York, who has known Ms. Malliotakis for over a decade. “She knows exactly what she believes in and where she wants to go.”

For years, Ms. Malliotakis has fought to be a significant Republican voice in the state.

Born in New York in 1980 to Greek and Cuban immigrant parents, she grew up on Staten Island. Her mother fled the Castro regime in the late 1950s; her father arrived in the United States from Crete in 1962, with $50 to his name. One point of familial pride, she has said, is that neither of them took any public assistance.

After working on state campaigns, Ms. Malliotakis was elected to the New York State Assembly in 2010. She gained citywide recognition when she faced Mayor Bill de Blasio in his 2017 re-election campaign, losing but ultimately seeing overwhelming support in her home borough, where about 70 percent of the population voted for her.

In 2020, she challenged Mr. Rose in a particularly aggressive race. Ms. Malliotakis’s campaign seized on conservative backlash to the protests against racial injustice in the summer. Mr. Rose’s attendance at a single protest became a focal point of the campaign, enabling Ms. Malliotakis — who boasted the endorsement of five police unions — to accuse Mr. Rose of being a supporter of efforts to defund the police.

But once Mr. Rubio lost the nomination, Ms. Malliotakis shifted from being against Mr. Trump to entrenching herself fervently in his camp. She even hosted a get-well rally for him after he tested positive for the coronavirus.

Longtime friends and local politicians were confused by the sudden switch, claiming that she swung right to secure votes.

Mike Arvanites, a surveyor for the city’s Board of Elections in Staten Island, has known Ms. Malliotakis for so long that he was present at her 40-day blessing and baptism in their Greek Orthodox Church. He pointed out that Ms. Malliotakis was elected to the New York State Assembly during the rise of the Tea Party, but she rejected the group’s extremism.

“The year she was running for mayor, she explained to me that she was terrified of some Trump supporters,” Mr. Arvanites, a Democrat, said.

He said he believed that Ms. Malliotakis has been radicalized by several in her camp, including Leticia Remauro, a Republican operative associated with Ms. Malliotakis’s congressional campaign and a longtime friend of the congresswoman. Last month, Ms. Remauro was pilloried for saying “Heil Hitler” in an earlier protest against coronavirus restrictions. (Ms. Malliotakis released a statement repudiating Ms. Remauro’s remarks.)

Ms. Malliotakis made her loyalty clear, joining three New York-based representatives and other Republicans in Congress to vote to overturn the election results.

But she said she would keep an open mind when it comes to President Biden.

“I’m willing to hear him out,” Ms. Malliotakis said in her interview. “There are opportunities for us to work together where there is some common ground, when it comes to vaccine distribution, reopening the economy and returning the jobs that we lost.”

“But,” she said, “I’m also mindful of the fact that I’m going to need to push back.”