What’s the significance of color? In Texas, a whole lot — the state’s politics are wrapped up in questions of identity, and red Texas and blue Texas have been at virtual war this election season over the future and soul of the country’s second-largest state. During Mr. O’Rourke’s bid for a United States Senate seat, political yard signs — Republican and Democratic alike — were routinely stolen or defaced. In the lines that formed outside polling stations, there were often shouting matches. In one case, a volunteer for Mr. O’Rourke’s campaign said she was putting up a sign outside an East Texas polling site, and a man threatened to get his gun if she didn’t take it down.

Color, in other words, matters.

The midterm election in Texas was unlike any the state has seen in decades. Here are five takeaways as Republicans and Democrats try to understand what happened.

Mr. O’Rourke lost on Tuesday by the narrowest margin in years for a Democrat running for statewide office. His Republican opponent, Senator Ted Cruz, won by a little more than two percentage points — a difference of about 200,000 votes, according to state elections data. So even Mr. O’Rourke’s defeat had tinges of victory for Democrats, helping to rekindle a notion that many had believed was years away from reviving in Texas: the two-party state.

His coattails helped Democrats flip 12 State House seats, two State Senate seats and two congressional seats, and Democrats managed to win the largest county in the state — Houston’s Harris County. Not a single Republican county-level elected official was left standing there, including the county’s top elected official, County Judge Ed Emmett, who had helped lead the region through Hurricane Harvey. Mr. O’Rourke carried much of urban Texas and scored surprising victories in battleground suburbs like Fort Bend and Williamson Counties — though that success was ultimately undermined by losses in rural West Texas, East Texas and the Panhandle. 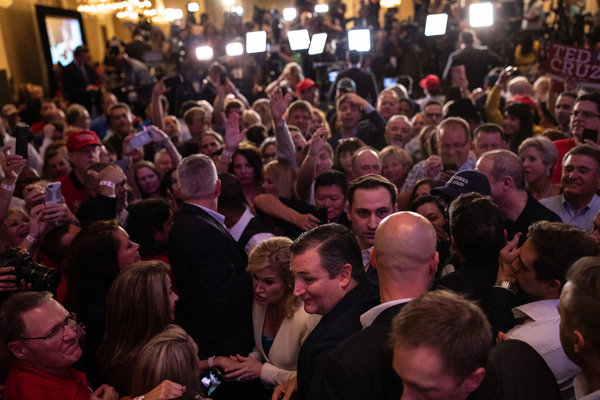 “This was the first statewide election since 2002 when the outcome of the statewide contests was not a completely foregone conclusion before the polls closed on Election Day,” said Mark P. Jones, a political-science professor at Rice University in Houston. “Beto’s success should serve as a wake-up call for scores of Texas Republicans that they can no longer count on winning simply by having an ‘R’ next to their name on the ballot.”

The stunner in Tarrant County

Before the election, Mr. Cruz called Fort Worth’s Tarrant County “the biggest, reddest county in the biggest, reddest state.” Tarrant County is tied to the mythic Texas cattle country, so friendly to conservatives that Republicans have regularly hosted their state conventions in Fort Worth. For years, Tarrant County was the red exception to the blue rule: The biggest urban counties in Texas are all blue — around Austin, Houston, San Antonio and Dallas — but Tarrant is red. Tarrant, over the years, went for Mitt Romney, Rick Perry, Greg Abbott, Donald Trump — and also Mr. Cruz, who crushed his Democratic opponent in 2012 in the county by 16 percentage points.

But Mr. O’Rourke did what Hillary Clinton and many other Democrats could not — he won Tarrant County, by a statistical hair: 49.89 percent of the vote compared with Mr. Cruz’s 49.27 percent. And Mr. O’Rourke’s supporters had a hand in defeating a Republican state senator and longtime Cruz ally in the county, State Senator Konni Burton, who lost to the Democrat, Beverly Powell. (It was the State Senate seat that previously had been held by another Democrat, Wendy Davis.)

Post-election on Wednesday, there wasn’t much celebrating going on at the headquarters of the Tarrant County Republican Party, in a nondescript industrial office complex in Fort Worth. The chairman, Darl Easton, a retired Air Force officer, sat at a large desk, empty except for a laptop and a red MAGA hat.

He was on the phone with one of his precinct chairmen. “Did you go to the watch party last night?” Mr. Easton asked, telling the chairman a few minutes later, “Oh my gosh, pretty sad down there. Wasn’t good, that’s for sure.”

Afterward, he seemed determined to put a good face on things. “I think we’ll bounce back,” he said. “It’s a warning bell to us to re-energize our base.”

Mr. Cruz built his reputation as an anti-incumbent insurgent who seemed to relish being feared, hated and respected rather than adored. His victory seemed a vindication not only of his willingness to embrace President Trump, but of his attack-dog brand.

After upending the Texas Republican establishment in 2012 and failing in his quest to become president in 2016, and now winning re-election to the Senate, don’t look for Mr. Cruz in 2018 to be anything but more aggressive than ever. Winning 4.2 million votes will do that.

“Ted is a champion for conservative causes,” said Jeff Roe, Mr. Cruz’s chief strategist. “He’s a champion in Texas and he’s a champion nationally. So I don’t think you should look for him to start straying from his principles.”

Republicans have long claimed the pop culture of Texas as their own — the barbecue joints and country music stars and pickup trucks. Mr. O’Rourke embraced those Texas symbols and reclaimed them for Democrats, jamming with Willie Nelson, steering his San Antonio-built Toyota pickup truck through rural Texas and air-drumming post-debate in the drive-through lane at Whataburger. It used to be an awkward counterculture stretch to be a Texas Democrat. He made it cool.

Even before Mr. O’Rourke’s narrow defeat, his yard signs had become one of the biggest visible displays of blue Texas in a generation. His signs easily outnumbered Cruz signs and helped convince the public, the news media and Republicans, long before the polls showed a tight race, that change was coming. It was a mass front-lawn revolt. If you were a Democrat in Texas, the question this fall became: “Where’s your sign?” Up until now, Republicans rarely had yard signs — why bother with a sign when you ruled the state? The strategy on political merchandise is likely to change in the future.

There might be a sequel to all this in two years.

John Cornyn, the state’s Republican senior senator, is up for re-election in 2020. Democrats are likely to fire up once again. Will it be Mr. O’Rourke? No one knows for sure.

Mr. O’Rourke failed to turn a well-funded, well-publicized and well-run campaign for Senate into a win. Now, strategists are asking a question: If he couldn’t do it, then who can? And if not now, then when? One of the other Texas Democratic stars — Julian Castro, the Obama-era secretary of housing and urban development — may be booked up in 2020, as he is seriously considering a run for president.

Could even bigger things also be in store for Mr. O’Rourke? He is that rare Texas Democrat whom even Republicans generally have nice things to say about. In the wake of Tuesday’s election, an unlikely voice seemed to be urging Mr. O’Rourke to consider running for president in 2020, even though he has said he’s not interested. That voice belonged to Mr. Roe, Mr. Cruz’s chief strategist.

“I don’t predict Democratic politics, but the fervent following that he has nationally, no one else compares to him on their side,” Mr. Roe told reporters at the Houston hotel ballroom where Mr. Cruz held his victory party. “No one does. He is in a league of his own in the Democratic Party, and if he doesn’t use that to run for president, I don’t know what he’d do with it.”

An earlier version of this article said that Senator John Cornyn had not made it clear whether he would run for re-election in 2020. In fact, he has said he intends to run.