For environmentalists, it was a week of victories. For the oil and gas companies they vanquished, as well as Alberta and the other parts of Canada that rely on the energy industry, the week brought new uncertainties. 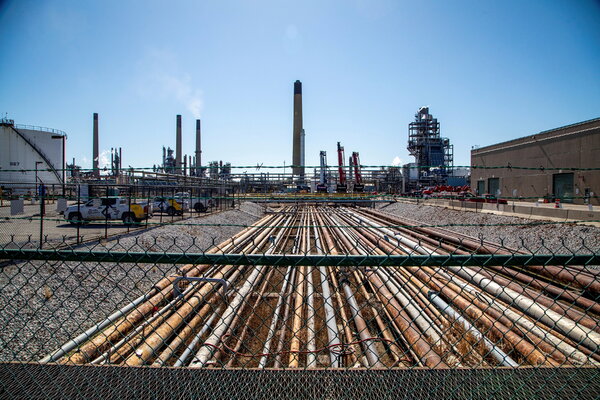 In a surprise upset, a tiny hedge fund, backed by a coalition of investors concerned about the environment, successfully persuaded other Exxon Mobil shareholders to elect two directors it hopes will move the company away from its traditional business toward clean energy sources.

My colleagues Peter Eavis and Cliff Krauss (a former Toronto correspondent for The New York Times) wrote that the vote was “the culmination of years of efforts by activists to force the oil giant to change its environmental policies and approach.”

Giant is no exaggeration when it comes to Exxon Mobil, which had $265 billion in revenues in 2019. It operates around the globe. Here in Canada, it controls Imperial Oil, the owner of the Esso brand, which has stakes in three oil sands operations and owns refineries, pipelines and chemical plants.

Unlike some energy companies based in Europe, Exxon has generally viewed renewable energy as a money-losing proposition, instead pouring money into things like deepwater exploration off the coast of Guyana and shale drilling in Texas and New Mexico.

But environmentalists also dealt a blow to one of those European oil companies, Royal Dutch Shell, this week. A Dutch court ruled that Shell was “obliged” to reduce the carbon dioxide emissions of its activities by 45 percent by the end of 2030, compared with 2019 levels. Shell had already announced a 2050 target for reaching net zero emissions, but the decision, if upheld, will force it to speed up its efforts.

[Read: A Dutch court rules that Shell must step up its climate change efforts.]

Also in the mix this week was another sign that demand for oil might drop off more quickly than expected. Ford, which just unveiled an all-electric version of its F-150 full-size pickup truck, the top-selling vehicle in Canada since 2009, said that it now expects electric cars and trucks to account for 40 percent of its production by the end of the decade. To that end, the company said it would spend $30 billion developing them in the five years ending in 2025, up from $22 billion.

What does this all add up to for the energy industry?

In the case of Exxon, Peter and Cliff wrote that “it is not clear if the activists can deliver on their dual goals — reducing the emissions that are warming the planet and lifting the profits and stock price of Exxon. The potential tensions between those objectives could doom the investor effort to transform the company and the oil industry.”

[Read: Activists Crashed Exxon’s Board, but Forcing Change Will Be Hard]

The Shell decision only applies to the company’s Dutch operations. But it’s widely anticipated that it will prompt other environmental groups in other countries to launch similar cases.

Regardless, Andrew Leach, an energy and environmental economist and associate professor at the Alberta School of Business at the University of Alberta, told me that Canada’s oil industry would ignore this week’s events at its peril.

“Things are moving so quickly,” he said. “Last year’s sustainability strategy is dated pretty much before the ink is dry right now.”

Suncor, the company behind Petro-Canada and the largest company in Alberta’s oil sands, unveiled its emissions reduction plan this week. It’s certainly ambitious. Suncor said it would cut its emissions by 35 percent by 2030 (again, compared to 2019) while still increasing the amount of oil it produces. The announcement made it the first major oil sands company to set a total emissions reduction target rather than just efficiency improvements.

Some of the reductions will come from carbon capture and storage technologies, an approach that will likely require government subsidies, probably through tax credits. Other gains will come from things like burning cleaner fuel, rather than carbon-intensive coke, to create the vast amounts of steam used to separate the oil-bearing bitumen from its surrounding sand, as well as investing in cleaner hydrogen production. All of it involves spending money.

Professor Leach said there was no absolute way to assess the realism of Suncor’s plan to reduce emissions and increase production during a time of ever-diminishing oil demand.

“A lot of what underpins some of this, whether it’s Suncor or other company, is that we’re imagining that everything can go on as before,” he said. “So, we’re going to keep doing what we’re doing on the refining, upgrading and retail side. And we’re going to invest in cleaner hydrogen production to do that.”

But there is, he said, a big “but”: “What does my business model look like in a net zero world? That’s where things get really complex.”

The answer to that depends on where oil prices go, a destination so uncertain that Professor Leach is unwilling to make a forecast.

“The carbon tax stuff gets all the heat and light,” he said. “But really what fundamentally changed the value of oil sands projects is massive decline in long-run expectations for the value of oil. We have this huge unknown, so essentially all of these questions come down to: What do you think the price of oil is going to be?”

The Rogers Centre in Toronto has not hosted a Blue Jays game since 2019. But though the team is consigned to playing in Florida and Buffalo because of the pandemic, its Canadian fans are still in the stands — if in two-dimensional form.

For decades, many Indigenous children were sent to residential schools, only to vanish. Now, a First Nation in British Columbia has used ground-penetrating radar to make a horrific discovery: a mass grave containing the remains of 215 children. Its search is not over, and its leaders expect to find more remains.

Manitoba was once a model for how to fight a pandemic. But over the last two weeks, it has had the highest average daily number of new Covid-19 cases per capita of any province or state in Canada, the United States or Mexico. Many blame the situation on the premier’s reluctance to close businesses.

Last month, Will Amos, a Liberal member of Parliament, stripped down before his computer while logged into a virtual sitting of the House of Commons. He promised it wouldn’t happen again. This week, his computer’s camera caught him urinating during an evening session.

As a photographer and resistance fighter during World War II, Faye Schulman debunked the common narrative that most Eastern European Jews had gone quietly to their deaths. She died last month in Toronto, believed to be 101. I urge you to read Sam Roberts’s gripping obituary describing her extraordinary life.

Jon Caramanica, The Times’s pop music critic, calls Mustafa, a 24-year-old singer from Toronto’s Regent Park neighborhood, a “bard of a horrific stretch of time, and a creative conscience for a community in pain.”

And Maya Salam interviews Mae Martin, the comedian and writer originally from Toronto who is behind the semi-autobiographical Netflix series “Feel Good.”

How are we doing?
We’re eager to have your thoughts about this newsletter and events in Canada in general. Please send them to [email protected]

Like this email?
Forward it to your friends, and let them know they can sign up here.