Weather: Heavy rain in the afternoon, with a high near 50. It’ll get gusty in the evening, and watch out for snow overnight. 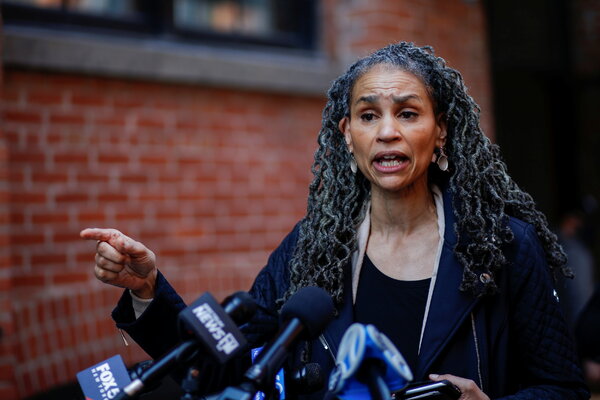 New York City has had 109 mayors. So far, not one has been a woman.

That glass ceiling may finally shatter in this year’s election. There are three strong female candidates for the Democratic nomination, and all have suggested that the testosterone-fueled political culture that is the backdrop for the sexual harassment scandal surrounding Gov. Andrew M. Cuomo makes a strong case for electing the city’s first female mayor.

“New York’s governor is reminding us it is time to see more women in positions of power,” Kathryn Garcia, the city’s former sanitation commissioner, said at a recent fund-raiser for her mayoral campaign. “In 2021, there is no right man for the job of mayor.”

[The women running for mayor have sharply criticized the governor.]

Two other women are running in the Democratic primary for mayor in addition to Ms. Garcia. (Another, Sara Tirschwell, is running in the Republican primary.)

The two Democrats are Maya Wiley, former counsel to Mayor Bill de Blasio and former chair of the Civilian Complaint Review Board; and Dianne Morales, a former nonprofit executive.

Ms. Wiley, the strongest female candidate in the polls and fund-raising, has emphasized a plan to create 100,000 jobs. Ms. Morales wants to cut $3 billion from the police budget. Ms. Garcia is focusing on improving basic services and quality of life in the city.

All three have shared their stories of sexual harassment and sexism, and argued that they would offer a more inclusive style of leadership. People who have worked in Mr. Cuomo’s office have described it as toxic, especially for young women.

All three candidates have taken a hard line against the governor: Ms. Morales called for his impeachment, while Ms. Garcia and Ms. Wiley called on him to resign.

Overt sexism, machine politics and the challenges of raising large amounts of money are just some of the barriers that prevent women from running for office in New York, political experts said.

Those issues and others bedeviled the candidacies of two women who ran unsuccessfully for mayor relatively recently, Ruth W. Messinger and Christine Quinn.

“Machine politics is a machine that was built by and for men,” Ms. Morales told my colleague Emma G. Fitzsimmons, the City Hall bureau chief.

Asian-Americans Are Being Attacked. Why Are Hate Crime Charges So Rare?

A Father’s Gift to a Mayoral Candidate: A $1 Million Super PAC

A man from Dutchess County was fined $5,000 after pleading guilty to illegally raising sharks in his basement to sell over the internet. [Fox 5 NY]

And finally: After a summer off, Shakespeare could return to Central Park

Last year, for the first summer since 1962, no players graced the stage at Central Park’s Delacorte Theater.

But on Tuesday my colleague Michael Paulson reported that the Public Theater announced that it hoped to resume Shakespeare in the Park, the free performances of the bard’s works that have become a beloved city tradition.

This year, the theater is planning just one Shakespeare in the Park production, “Merry Wives,” a 12-actor, intermission-free version of “The Merry Wives of Windsor.” It would have an eight-week run starting in July instead of the usual two-play season beginning in May.