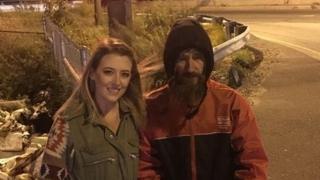 The US protagonists in a viral “pay it forward” fundraising campaign for a homeless man have been charged with theft by deception and conspiracy.

The charges against couple Kate McClure and Mark D’Amico and former marine Johnny Bobbitt were announced in a news conference on Thursday in Burlington County, New Jersey.

The prosecutor’s office said the “fake feel good story” was predicated on a “lie” concocted a month before they launched the campaign.

After his arrest on Wednesday, Mr Bobbitt remains in custody and the couple were released pending a court date on 24 December.

The three face potential sentences of five to 10 years for second-degree crimes.

The announcement of criminal charges of theft by deception and conspiracy to commit theft is the latest in a series of high-profile twists and turns.

The @prestonandsteveshow was one of the best experiences I’ve had in my life. They couldn’t of been more gracious and kind. I’ll be listening to their podcasts on the road! @this_is_mark @k8_the_gr8_____

The @prestonandsteveshow was one of the best experiences I’ve had in my life. They couldn’t of been more gracious and kind. I’ll be listening to their podcasts on the road! @this_is_mark @k8_the_gr8_____

Mr Bobbitt and the couple first came to prominence in November 2017 when Ms McClure launched a crowdfunding Go Fund Me campaign to re-pay the debt of a homeless man who came to her aid at the side of a road.

A photograph of Ms McClure and Mr Bobbitt, a veteran and drug addict who had lived on the streets for several years, standing on the side of the road, fronted the fundraising campaign.

More than 14,000 people donated, many inspired by the details like Mr Bobbitt instructing Ms McClure to lock her car doors before he returned with a can of petrol.

Officials said on Thursday they believe the photo was staged after the three met previously when Ms McClure and Mr D’Amico visited a casino near an underpass where Mr Bobbitt spent time.

The relationship between the three soured in August when Mr Bobbitt brought legal action against the couple, alleging they were using the funds as their personal “piggy bank” to fund an extravagant lifestyle.

After exceeding their original fundraising goal of $10,000, they bought clothing and a new camper van for Mr Bobbitt, but later reportedly asked him to remove it from outside their property.

Ms McClure and Mr D’Amico told their online supporters the money would go to two financial trusts for Mr Bobbitt, as well as a lawyer and a financial adviser to help him manage all the money.

“Every dollar he ever touched was used for drugs,” Mr D’Amico told NBC in a nationally televised interview in August.

Investigators claimed the three originally made up the story to make people feel bad and compel donors to contribute to a cause.

In thousands of text messages read by police, the couple had discussed financial woes, inability to pay bills and debts, and Mr D’Amico hoped to raise more money by pursuing a book deal about the story.

Expressing sympathy for Mr Bobbitt’s homelessness, the prosecutor nonetheless stated that the veteran was “fully complicit” in the campaign, promoting it in several media appearances and appearing in the original photograph.

Mr Bobbitt posted a similar story on Facebook in 2012 about helping a woman who had run out of gas, he said, but that “full responsibility” should be ascribed to all three.

In light of the charges, donors to the Go Fund Me campaign are expected to receive full refunds, he added.