The front-runner in the race for mayor of New York City, Eric Adams, took aim at his main rival, Kathryn Garcia, on Monday as a new poll showed that the two candidates were leading as the campaign enters its final week.

Mr. Adams, the Brooklyn borough president, clearly sees Ms. Garcia as a threat: He held a news conference with sanitation workers on Monday to draw attention to allegations that women and minority workers at the city agency received unequal pay. Ms. Garcia ran the Sanitation Department until last year, when she resigned to run for mayor.

Ms. Garcia, for her part, defended her record and declared the mayoral contest a two-person race.

“I guess the mudslinging has started,” she said at a senior center in Manhattan. “So I guess he knows that we’re in a two-person race.”

She said she had left the Department of Sanitation more equitable than she found it. “I increased the number of chiefs and leaders in the department who are people of color by 50 percent,” she said. 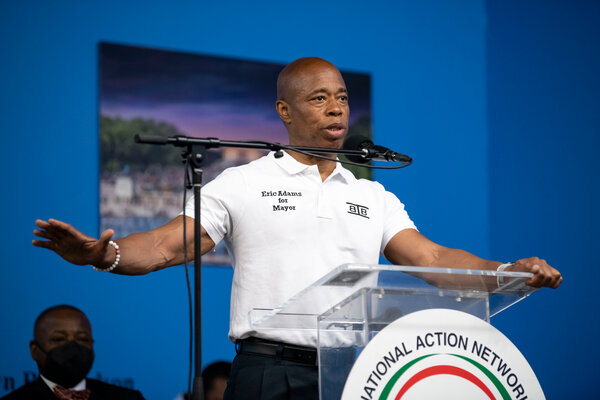 Early voting began in New York City over the weekend ahead of the primary election on June 22.

In the poll, conducted by the Marist Institute for Public Opinion, Mr. Adams had 24 percent support, followed by Ms. Garcia with 17 percent and Maya Wiley, a former counsel to Mayor Bill de Blasio, with 15 percent. Andrew Yang, a 2020 presidential candidate who had once been considered the front-runner, fell to fourth place with 13 percent.

Under the city’s new ranked-choice voting system, Mr. Adams would win with 56 percent after 12 rounds, while Ms. Garcia was second with 44 percent.

The poll was conducted between June 3 and June 9 and had a margin of error of 3.8 percent.

During Monday’s news conference, held near a sanitation facility in Queens, Mr. Adams criticized Ms. Garcia’s management of the city’s sanitation system and stood with employees from the department who criticized her for pay equity issues.

Ms. Garcia began at the senior center on the Upper East Side of Manhattan. Asked how she would frame the choice for voters between her and Mr. Adams, Ms. Garcia cast herself as a seasoned public servant rather than a politician, and implied that Mr. Adams was on the hook for political favors.