Thirty-seven years ago, Virginia Hannon, a cook at an elementary school in Pembroke, Mass., was found dead in her home. She had been beaten, stabbed and strangled.

Detectives interviewed more than 50 people but were unable to solve the crime until a tipster called the police last year and said that a man named Jesse Aylward, who had died the previous day, had confessed that he killed someone in Pembroke many years earlier.

On Thursday, the authorities said, DNA evidence collected from Mr. Alyward’s body definitively linked him to the crime scene and proved that he was responsible for Ms. Hannon’s brutal death on Feb. 13, 1984.

Still, the slaying continues to trouble investigators and Ms. Hannon’s family, who said they did not know why Mr. Aylward had killed Ms. Hannon, who was 59 and lived alone, or whether they knew each other.

“There’s a lot of questions that we still would like to answer, and we may never get all of the answers,” Rick Wall, the former police chief in Pembroke, said at a news conference with Ms. Hannon’s family on Thursday. “But we’re never going to stop looking for exactly what happened and be able to give them the truth.”

Mr. Aylward, who was 58 when he died in February 2020, grew up in Pembroke and lived near Ms. Hannon. The authorities said he had a criminal history from the mid-1980s to the mid-1990s that included “some assaultive behavior.” An online obituary that matches his name and date of birth said he was a handyman who had once owned his own paving and seal-coating business.

Ms. Hannon was known as the “lunch lady” at Bryantville Elementary School in Pembroke, about 30 miles south of Boston. She took care of stray cats, kept biscuits in her house for neighborhood dogs and loved bingo, family cookouts, and ice cubes in her beer glass, her nephew Richard Hannon said.

“She was a great woman,” Mr. Hannon said. “She was very family oriented and loved the area, loved the people around here, and was very generous.” 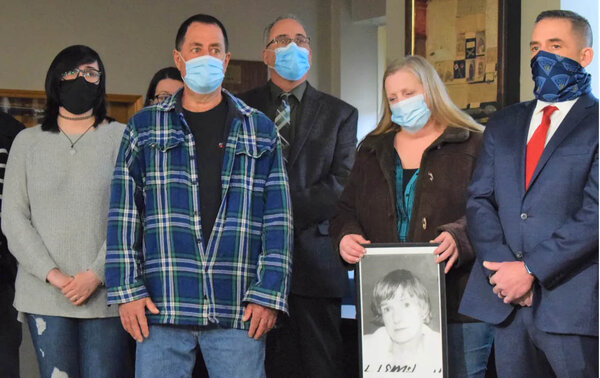 Ms. Hannon’s family has long wondered whether her killing might have been connected to a $380,000 inheritance she had collected from an aunt. Ms. Hannon had told friends about the money but had never flaunted it, Mr. Hannon said.

“People knew that she had gotten an inheritance from her aunt, but she wasn’t the type of person who would carry cash, and she wasn’t out buying filet mignons,” he said. “She drove an old car, and she was a very thrifty person.”

The killing shook Pembroke, and over the years, the police and Ms. Hannon’s family sought to keep her case in the public eye by telling her story. In 2019, they held a vigil for Ms. Hannon on the 35th anniversary of her death.

Timothy J. Cruz, the Plymouth County district attorney, said the authorities had never given up hope of solving the case.

In 2019, investigators found that DNA samples taken from Ms. Hannon’s house — including broken glass from the door, bloody paper towels and the nylon stockings that had been used to strangle her — were all linked to the same unknown man.

But attempts to identify that man through forensic genealogy, which uses genetic evidence to identify the relatives of criminals and eventually the criminals themselves, were not successful, investigators said.

Then the tipster called the police, one day after Mr. Aylward died in February 2020. Mr. Cruz said the person, whom he declined to describe, said Mr. Aylward had made a confession in early 2019.

“He said he killed somebody in Pembroke many years ago,” Mr. Cruz said. “There’s really not a lot of information I can tell you about it other than the fact that, obviously, this tipster knew this individual, and they had conversations, and they made those statements.”

He said it was fortunate that the call had come so soon after Mr. Aylward died, because the authorities were able to retrieve DNA samples from Mr. Aylward’s body at the hospital. Detectives also searched a home in Brockton, about 12 miles west of Pembroke, where Mr. Aylward was believed to have lived.

Mr. Aylward’s DNA matched the DNA samples that had been taken from the crime scene, including the broken glass on the door, the bloody paper towels and the nylon stockings, Mr. Cruz said.

“We have exhausted all of the evidence that we currently have,” Mr. Cruz said, “and it all points in the direction of Jesse Aylward.”

Still, he said, the evidence did not solve the mystery of why Ms. Hannon had been killed. “You know, the DNA gets us to the people, but it doesn’t necessarily get us to what exactly happened,” he said.

Mr. Hannon thanked the police for never having given up on his aunt’s case, saying that “a little closure for her is nice.” But he said he hoped that someone who knew Mr. Aylward would call the authorities to explain who he was and why he might have killed Ms. Hannon.