ACWORTH, Ga. — Mario González heard the gunfire from inside Young’s Asian Massage and immediately worried about his wife, who was in another room. But before he could check on her, he said, law enforcement officials handcuffed and detained him for about four hours while they worked to determine the identity of the gunman.

During that time, officers told him: His wife, Delaina Ashley Yaun, 33, had been killed.

Mr. González described the March 16 shooting and the confused hours that followed in a video interview and news story published by the Spanish-language news site Mundo Hispánico. He expressed his frustration with law enforcement officials for detaining him, suggesting that he might have been treated poorly because he is Latino, and shared his anguish over the loss of his wife.

“They took away the most precious thing that I have in my life,” Mr. González said of the gunman, before stopping himself and correcting tenses. “That I had.”

The attack at Young’s Asian Massage was part of a shooting spree at three spas in and around Atlanta. Ms. Yaun was among eight people killed by a gunman who intentionally targeted employees at those businesses, law enforcement officials said.

The spokesman, Capt. Jay Baker, was no longer the office’s public representative on the case, and the sheriff, Frank Reynolds, apologized and defended Captain Baker as not intending to disrespect the victims or their families. “We regret any heartache Captain Baker’s words may have caused,” Sheriff Reynolds said.

Efforts to reach Mr. González in recent days have also been unsuccessful.

Tuesday had been a date night for Mr. González and Ms. Yaun, and the couple, who married last spring, went after work to Young’s Asian Massage, in Acworth, an Atlanta suburb. They arrived shortly before the shooting started, Mr. González said in the video interview, and they were ushered into separate rooms for their massages. 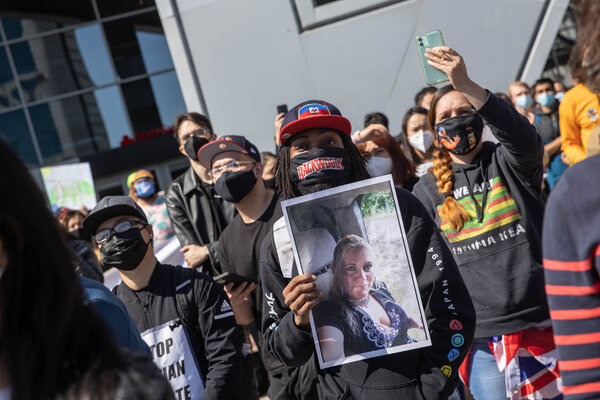 The authorities said that Robert Aaron Long, 21, began his rampage shortly before 5 p.m. on Tuesday at Young’s, which is wedged in a small shopping center between a boutique and hair salon.

Mr. González told Mundo Hispánico that he heard the gunshots but that he was too afraid to open the door to see what was happening. He feared the bullets were flying into the room where his wife was taken.

Once Cherokee County sheriff’s deputies arrived, he was detained and held for about four hours, Mr. González said, according to Mundo Hispánico.

He said he did not see his wife as he was led out of the spa, and officers did not let him get close to her. Eventually, he said, officers told him that his wife had been killed.

“And they knew that I was the husband,” Mr. González said of the authorities. He held a photograph of himself with his wife as he spoke. “They gave me the news that she was dead.”

He questioned why it took officials so long to tell him that his wife had died, and wondered why they had detained him in the first place.

“Maybe because I’m Mexican, I don’t know,” he said. “Because the truth is, they treated me badly.” He showed the camera the marks left on his arm from the handcuffs placed on him by officers.