To explain the tumultuous events of recent days, Tracy Merlin used an analogy her second-grade class would understand: the eternal struggle between dog people and cat people.

Ms. Merlin scanned the sea of little heads floating in their individual squares. “Do you think it’s OK for the cat people to break into all the pet stores when they’re upset?” she asked.

A riot at the U.S. Capitol. The second impeachment of Donald J. Trump. And, despite it all, a transfer of power. The events of the past few weeks have been mind-boggling for many adults.

How, then, to explain them to students, be they preschoolers meeting on socially distanced circle rugs or college students peering anxiously into seminar videochats?

Across the United States, educators have rerouted their syllabuses toward the news. They have turned to science fiction, Shakespearean tragedy and the fall of Rome in search of parallels to help their students process the often frightening and surely historic events.

“When I was a kid, the Challenger blew up,” Ms. Merlin, 46, said the day before the inauguration of President Biden. She remembers exactly what she was doing when the space shuttle exploded after liftoff in 1986 — just as her parents remember exactly what they were doing when John F. Kennedy was assassinated.

“I don’t know if this is this generation’s moment,” she continued. “But I know there are things that stick with them from a very young age. If I can let them know that it’s important to know about what is happening around you, and be informed, and have the facts, then I feel like I’ve done my job.”

College students have needed help framing these turbulent weeks, too. 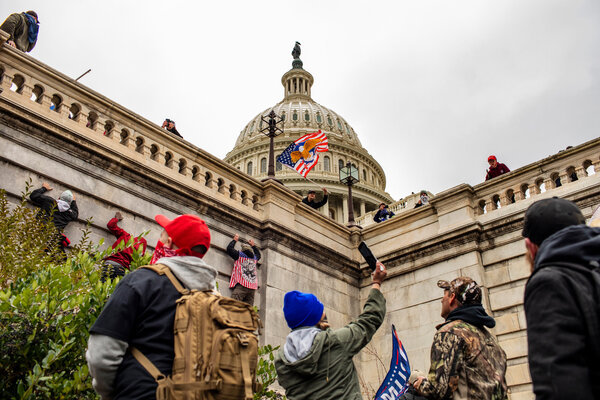 On Wednesday, the morning of the inauguration, 180 students logged on to Steven G. Noll’s introductory American history class at the University of Florida. The lecture topic was post-Civil War Reconstruction.

Professor Noll, 68, easily plucked out uncomfortable parallels to the present.

“Words matter,” he said. What were once called “riots” that culminated in the killing of newly freed and enfranchised Black people are now called “massacres,” he said.

He showed a picture of a stone monument in Louisiana, erected in the memory of three “heroes,” who in 1873, the monument said, “fell in the Colfax riot fighting for white supremacy.” Those rioters killed 150 Black people.

He said that carrying the Confederate flag, as one of the Trump supporters in the mob that took over the Capitol on Jan. 6 was photographed doing, tells us, “that they are fighting for white supremacy.”

The night of the Capitol riot this month, many of Melissa Deokaran’s middle school students in Washington, had lain awake, some hearing Trump supporters shouting in their alleys. At least three have parents in the D.C. National Guard who went to protect the Capitol after the riot.

So the day after the riot, Ms. Deokaran used her Latin class to discuss the etymology of “invasion,” “insurrection” and “coup.” Then on Thursday, after Mr. Biden assumed office, Ms. Deokaran taught the root of “inauguration,” “resilient” and “union.”

“I think it’s important for us to understand what a union means and what it means to be unified,” Ms. Deokaran, 32, told her class. In Latin, she said, “it means ‘one.’ In English, union means being ‘joined as one.’”

Across the country, schools occupy a fraught political space. The ways that children learn history, civics and literature can shape the votes they will one day cast. Teachers work hard to ensure their classrooms are safe for everyone to express opinions and disagree.

But the pandemic has eroded that four-walls privacy. Teachers have had to navigate the political passions of their communities in a time of intense division. Parents with strong opinions might be nearby as students learn virtually — and objecting to characterizations of polarizing events.

“I’ve had constant meetings and emails and such with a fairly aggressive contingent of parents that feels very strongly about the way that I am dealing with these issues in my classroom,” said James Mayne, who teaches at a Seventh-day Adventist school in Clark County, Wash., that he said leans conservative.

On Thursday, Mr. Mayne asked his 11th-grade U.S. history students to compare Mr. Biden’s inaugural speech with Abraham Lincoln’s second inaugural. Then he opened the floor for discussion, steering students toward the struggles both presidents faced in reuniting the country.

“I would have a very difficult time finding ground with white supremacists,” said Jordan, 16.

“White supremacists are an extreme part,” retorted Talia, 16, who called herself a liberal. “I have a bunch of people on the other side of my life that are not racists. They may have a bad way of explaining things sometimes, but in their hearts they are good people and they love everyone.”

If you can’t look past language, Talia said, you can’t find middle ground.

In politically conservative or even just politically mixed places, some schools have shied away from political discussions. Some school districts, like Bangor, Maine, did not broadcast Mr. Biden’s inauguration on Wednesday because they feared violence. And teachers who live in divided areas must work hard to avoid seeming biased.