TORONTO — On a snowy evening in December 2016, a month after Donald Trump was elected president of the United States, Prime Minister Justin Trudeau of Canada held a rare farewell state dinner for the departing vice president, Joseph R. Biden Jr. It was like a tearful goodbye between two old friends.

“We are more like family. That’s the way the vast majority of Americans feel about Canada and Canadians,” Mr. Biden said to a hall packed with politicians in Ottawa. “The friendship between us is absolutely critical to the United States.”

He ended with a toast: “Vive le Canada. Because we need you very, very badly.”

After four years of surprise tariffs, stinging insults and threats from President Trump, a giddy jubilation and sense of deep relief spread across Canada on Saturday, with the news that Mr. Biden had won the presidency. Many Canadians hope to return to the status of cherished sibling to the United States, and that the president-elect’s personal connection to Canada, and that of his running mate, Senator Kamala Harris, will help heal the wounds.

“With Biden, we see the United States as having a centrist conciliator, a friend to Canada, and somebody we can be relaxed with and have genuine disagreements with without being disagreeable,” said Frank McKenna, a former Canadian ambassador to the United States.

He added that people in his yoga class on Monday said “Namaste for Joe Biden.”

“People have been walking on eggshells for four years for fear of annoying the president or his sycophants,” he said. 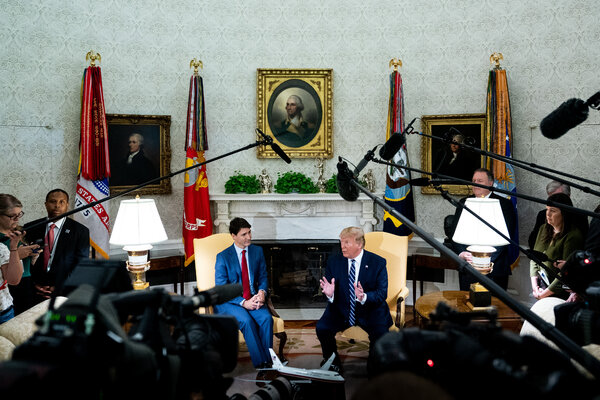 Over the weekend, Mr. Trudeau made a congratulatory call to Mr. Biden. “We’ve worked with each other before, and we’re ready to pick up on that work and tackle the challenges and opportunities facing our two countries — including climate change and COVID-19,” the prime minister wrote on Twitter, citing two issues where he has deep disagreements with Mr. Trump.

For those who have watched Mr. Trudeau maintain a disciplined silence in the face of Mr. Trump’s attacks, it was easy to read quiet celebration in Mr. Trudeau’s message. He said he and Mr. Biden had “agreed to keep in touch and work closely together.”

Bruce Heyman, a former U.S. ambassador to Canada, noted that many of Mr. Biden’s positions mirror those of the Trudeau government, including the advancement of women’s rights and the importance of fighting climate change.

“This is a man who is more aligned with the Canadian value set, regardless of party,” said Mr. Heyman, who was sworn in as ambassador by Mr. Biden in 2014, and ran a campaign to get overseas Democrats to vote this year.

Both Mr. Biden and Ms. Harris have personal connections to Canada. At that state dinner four years ago, Mr. Biden noted that his first wife, Neilia, had Canadian family roots, and said that both his sons dreamed of becoming “Mounties,” members of Canada’s national police force.

He recalled that when Neilia and their baby daughter Naomi were killed in a car accident in 1972, Prime Minister Pierre Trudeau, Justin’s father, reached out to him personally “and commiserated with me.”

Ms. Harris spent her formative teenage years in Montreal, after her mother Shyamala Gopalan Harris, a breast cancer specialist, got a job working at McGill University and the Jewish General Hospital. Students and teachers gathered on the steps of her alma mater, Westmount High School, on Monday with “Congratulations Kamala” signs. Quebec’s premier, François Legault, noted on Twitter that she had “spent part of her youth in Montreal.”

“We hope to see you soon. You will always be welcome in Quebec,” he wrote.

Few countries had as much at stake in the American elections as Canada. The two countries share the world’s longest border, and two-thirds of Canada’s population lives within 60 miles of it. Roughly three-quarters of Canada’s exports head to the United States, and before the pandemic, many Canadians crossed over regularly to shop, vacation or visit.

As Mr. Trudeau says frequently, sometimes with obvious restraint, the relationship with the United States is Canada’s most important, but it is also one that has suffered serious damage in the past four years.

The previous five presidents made a point of traveling to Canada for a state visit within a few months of taking office, and each visited multiple times. Mr. Trump went only once as president, for the 2018 Group of 7 meeting, and lashed out at Mr. Trudeau as he left, calling the prime minister “very dishonest and weak.”

By then, he had slapped tariffs on the country’s steel and aluminum, claiming national security concerns, which most Canadians found deeply unfair and insulting. Mr. Trudeau relied on quiet diplomacy and a team of surrogates who built alliances with people around Mr. Trump, and eventually Canada reached a critical new trade deal with the United States and Mexico.

But Canadian feelings toward Mr. Trump continued to sour, plummeting to the lowest view of any president over the past 20 years. Recent polls show that as many as four in five Canadians hoped Mr. Biden would be elected president. In an editorial, The Globe and Mail, a leading newspaper, said, “Our downstairs neighbors have gone long enough without an adult in the White House.”

Jagmeet Singh, leader of Canada’s left-leaning New Democratic Party, said at a news conference last week, “It would be better for the world if Trump loses.”

The 5,525-mile border between the United States and Canada has been closed since March, when the number of daily new coronavirus infections took off in both countries. Despite the huge economic and personal implications, the vast majority of Canadians support keeping it shut until the United States reduces its infection rate, which is now triple Canada’s.

“The single biggest thing that matters to Canada is whether Biden will be able to bring the virus under control,” said Janice Stein, the founding director of the Munk School of Global Affairs and Public Policy at the University of Toronto. Given how polarized the United States remains, that seems unlikely, she said.

“The politicization of the pandemic is not going to go away,” Professor Stein said.

Even with Mr. Biden’s election, many Canadians say their relationship with their neighbor won’t be the same as it was before. For one thing, Mr. Biden’s economic plan is protectionist, like Mr. Trump’s.

It is a “new world,” said Laura Macdonald, a political science professor at Carleton University in Ottawa, and “we have not gone through careful rethinking of what that means for Canada.”

“Canadians have to shift our mind-set,” she said. “We can’t rely always upon U.S. being there for us, when we are looking for a market. We need more diversification.”

At a news conference in Ottawa on Monday, Mr. Trudeau reiterated that the two countries enjoy a “unique relationship.” He extended congratulations to Mr. Biden and to Ms. Harris, whose election as the first female, first Black and first South Asian vice president he called “an inspiration and a reminder that everyone’s voice belongs in politics.”

He said he was confident in the U.S. democratic system and that, despite Mr. Trump’s claims, “we can be quite certain of the results.”

Until the Trump administration ends on Jan. 20, Mr. Trudeau will continue to work with it, but he is unlikely to hold a farewell dinner for the departing vice president, Mike Pence.

“There is no particular relationship of consequence between him and our government,” Mr. McKenna said. “He’s only been here to chastise us.”

Prince Charles 'keen to meet Joe Biden' says Jobson When you subscribe we will use the information you provide to send you these newsletters. Sometimes…