New York City’s fast-food industry has served as a laboratory for the nation’s labor movement for the last several years.

Its workers were the first to stage rallies demanding a minimum wage of $15 an hour. Then, they pressed for changes in the way national restaurant chains set their work schedules.

Now, they are asking the City Council to shield them from being fired without a valid reason. That protection, the sort of job security that unions usually bargain for, would be a first for a city to provide to workers in a specific industry, labor law experts said.

City Councilman Brad Lander said he planned to introduce a bill on Wednesday that would require fast-food businesses to show “just cause” for firing workers and give them a chance to appeal dismissals through arbitration.

Mr. Lander, a Democrat from Brooklyn, said he was responding to surveys of fast-food workers indicating that “there’s a substantial percentage of employees that have been fired unfairly.” One woman said she was fired from a Chipotle restaurant for not smiling enough.

But restaurant industry officials and lawyers who represent the industry said the proposal was just the latest stratagem employed by a national union that has been trying to organize fast-food workers ever since they first staged protests for better wages and working conditions in 2012.

The Service Employees International Union adopted the workers’ Fight for 15 campaign, which spurred New York and other cities and states to raise minimum wages to $15 an hour and in some places higher.

“We’re always skeptical about any efforts by the S.E.I.U., that they’re really anything more than a front to help them increase their dues-paying membership and their political agenda,” said Matthew Haller, an executive with the International Franchise Association in Washington.

Two years ago, the union’s powerful local in New York, 32BJ SEIU, successfully pressed the council to impose rules for the setting of work schedules at the city’s fast-food restaurants and retail stores. The rules came in response to complaints from workers about being given too little notice about when they would be needed or not needed, making it difficult for them to plan their lives.

But the restaurant industry sued the city in state court late last year, arguing that it did not have the authority to tell certain businesses how to deploy their workforces. The industry believes that power resides with state officials, who are also working on establishing scheduling rules. The suit is ongoing.

The SEIU is “putting in place a strategy that starts in New York but doesn’t end in New York,” said Michael Saltsman, managing director for the Employment Policies Institute, a pro-business research group in Washington. The union is “playing a dangerous game with the fast-food industry in New York” by demanding so many changes in work rules they may respond by finding ways to operate with fewer employees.

Michael J. Lotito, a labor lawyer whose firm represents the restaurant industry, said New York’s requiring “just cause” for firings by fast-food employers would be a first in the country. He said New York City, San Francisco and Seattle have been competing to “out-progressive one another” by imposing labor-friendly regulations on low-wage businesses. 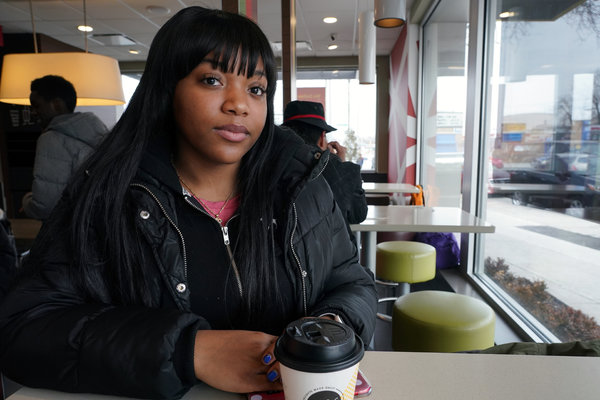 Mr. Haller said the proposed just-cause legislation was “a solution in search of a problem” and questioned its timing, given that New York City has an all-time low unemployment rate of 4 percent.

But Mr. Lander disagreed, saying his proposed legislation was needed, regardless of whether it might be part of a broader campaign to organize fast-food workers. He cited a recent survey by advocates for low-wage workers — the Center for Popular Democracy, the National Employment Law Project and Fast Food Justice — that found that about two-thirds of workers fired from fast-food jobs said they had been fired without being given a reason.

“No one should fear being fired for no reason at all,” Mr. Lander said in an interview. “This is not saying an employer has to keep a person who’s not doing their job well.”

The survey results are included in a report published by union-backed groups that have been pressing for greater regulation of fast-food restaurants and other low-wage businesses.

Hector Figueroa, the president of 32BJ, said the rate of firings for little or no cause is “a big problem” in the industry. He called it “one of the things that give the fast food industry a bad name.”

Corey Johnson, the council speaker, did not say whether he would support the bill, but a spokesman said he was “supportive of the rights of fast food workers.’’

Several people who worked for national chains recounted tales of being fired on the spot for the slightest of transgressions.

Melody Walker, 37, said she was fired from a Chipotle restaurant in Manhattan last summer because her manager said she did not smile enough. She said the firing came a few months after her work hours had been sharply reduced without explanation, forcing her to supplement her pay with unemployment benefits and other public assistance. “Every fast-food job I’ve had, it’s not stable,” Ms. Walker said.

Princess Wright, 22, said she had worked at a McDonald’s in Downtown Brooklyn since 2014 before she was suddenly fired in November for missing a shift. Ms. Wright, who expects to graduate from Mercy College in the spring, said she had called several hours in advance of a scheduled shift to tell her boss that she was staying home to help her landlord out of a jam by babysitting.

She said she thought her boss understood. But when she showed up to work the next day, she was sent home and then fired, she said. She argued that she had been diligent and reliable, but he cited some tardiness that she said resulted from conflicts with her classes at Mercy College.

“I felt like firing me was not fair, but I wasn’t sure if they could just fire me,” Ms. Wright said. “I’ve never been fired from anywhere before.”

Rather than simply accept the dismissal, Ms. Wright said she appealed to a higher-ranking manager and managed to regain her job, but not before coming up short in her rent because of the lapse.

The steady tide of proposals to impose new rules is frustrating restaurants owners, like Spencer Rubin, chief executive of the Melt Shop chain of sandwich shops based in Manhattan. Mr. Rubin said his company never fires a worker without warning or an explanation.

“Ultimately I’m a fan of making our employees’ lives better but some of these rules make it really, really challenging for us to operate,” Mr. Rubin said. “It is a little odd that fast-casual and fast-food restaurants continue to be singled out.”