PORT-AU-PRINCE, Haiti — Prime Minister Ariel Henry of Haiti on Monday promised a “tenfold” increase in rescue and aid efforts to the quake-ravaged southern peninsula of his country, as he privately expressed frustration to the American ambassador at the slow rollout of help.

Mr. Henry’s public promise on Twitter and his private anger, conveyed in an internal State Department update shared with The New York Times, came as local and international aid agencies struggled to deploy medical help and search teams to the area about 80 miles west of Port-au-Prince, the capital.

The 7.2 magnitude quake that struck Saturday morning could not have come at a worse time for Haiti. The Caribbean nation is still traumatized over the unsolved July 7 assassination of President Jovenel Moïse and is still recovering from the calamitous quake that destroyed much of the Port-au-Prince area in 2010. Severe poverty, systematic gang violence, the pandemic and a history of dysfunctional government have only worsened the struggles of Haiti’s 11 million people.

The civil defense agency did not provide a promised update on casualty figures on Monday morning. As of Sunday evening the death toll totaled nearly 1,300, with hundreds missing and thousands of injuries in an area that is bereft of medical resources in normal times. 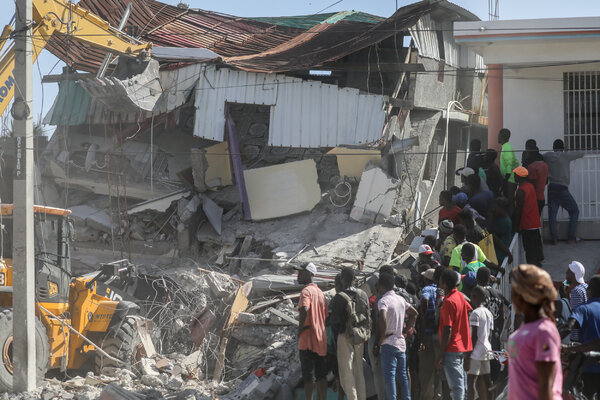 The homes of as many as 1.5 million Haitians across the southern peninsula are structurally damaged, according to another internal United States government assessment.

The need to expedite help intensified as Tropical Depression Grace threatened Haiti and other Caribbean countries. The storm, which made landfall in Haiti on Monday, could dump enough heavy rain to cause possible mudslides and flooding in the quake zone, where hundreds of thousands of survivors are sleeping in the open.

“We will act with greater speed,” Mr. Henry said in his Twitter post. “Aid management will be sped up. We are going to increase our energies tenfold to reach, in terms of assistance, the maximum number of victims possible.”

Officials interviewed in and around Les Cayes, a city in Haiti’s southern peninsula badly affected by the quake, worried that the storm could bring disease and hunger, as the strong gusts of wind and rainfall further complicate and delay relief efforts.

But the destruction of churches across the southern peninsula may be the biggest blow to longer term support for Haitians in the affected area.

For many Haitians, their only source of aid throughout their lives, in the absence of strong government institutions, has been the church. Many were in ruins after Saturday’s earthquake, leaving entire towns and at least one city without a church left standing.

“Our church is destroyed and many churches in and around Les Cayes are destroyed but we have faith and we know that as long as people are still here, we can build back our community,” said Rev. Yves Joel Jacqueline, 44, who works at Les Cayes’ cathedral with Haiti’s cardinal, appointed by the Vatican.

“In Les Cayes, we are the only thing here. There is no support from the government,” he added.

The heavy concrete rooftops and domes of churches across the southern peninsula are now caved in, tabernacles crooked or buried under rubble, walls marbled with deep cracks. Every church seen by reporters from The New York Times in a 25-kilometer drive in and around Les Cayes on Sunday was completely destroyed, with the over 100 year-old cathedral in the city of Jeremie, an architectural landmark, left in ruins.

Father Jacqueline stood atop the rubble of his church and leaned on a gnarled set of red and white radio towers that collapsed at the building’s entrance, printouts of a past Christmas program strewn across the ground.

The priest had shared the residence with the Archbishop of Les Cayes and Haiti’s cardinal. All three men escaped the building as they were having breakfast, but a disabled priest who was eating with them and two women who tend to the residence were killed.

“The church has suffered from the situation in Haiti, from the kidnapping, the uncertainty and then the coronavirus,” said Father Jacqueline, referring to the widespread gang violence across Haiti that has not spared religious institutions, with thugs kidnapping priests and nuns for ransom.

A crew of men used their hands and sledgehammers to extract what they could from his destroyed residence, including sensitive church documents, while trying to keep at bay men on the street who wanted to take what they could, anything that remained intact from the destruction.

Local officials fear that as the population grows more desperate, they will begin to seize what they can, with not even the church spared.

The only government help his church has received so far, Father Jacqueline added, was taking away the body of his colleague, the dead priest.