[What you need to know to start your day: Get New York Today in your inbox]

When Andy Byford, the New York City subway leader, met with Amazon executives during the summer, Mr. Byford boasted that Long Island City in Queens was a transit wonderland ready to serve their army of workers.

The reality is far less rosy.

Long Island City does have half a dozen subway lines, the Long Island Rail Road, buses and ferry boats. But the picture Mr. Byford painted glosses over the enormous challenges facing the city’s transportation network, which regularly struggles to get millions of New Yorkers where they are going.

The subway is still maddeningly unreliable more than a year after it was declared to be in a state of emergency. Last week, a relatively modest snowstorm paralyzed traffic across the region. That same day, the Metropolitan Transportation Authority, which oversees the subway and buses, announced it was facing a budget crisis and might have to drastically raise fares or cut service.

Still, Mr. Byford was optimistic about the system’s ability to handle a potential influx of 25,000 workers in Long Island City, the site Amazon picked for one of two new locations, along with a suburb in Virginia.

“This is obviously part of the reason — a large reason I would suggest — why Amazon was attracted to Long Island City,” Mr. Byford told reporters last Thursday after an M.T.A. board meeting. “It already has a rich transport-transit offer.”

But Jimmy Van Bramer, the city councilman who represents the neighborhood, said one of the main subway lines serving the area, the No. 7, was already crowded and miserable and that Amazon’s arrival would only worsen the problem.

“If you can’t get on those trains or if those trains aren’t reliable, then it is not transportation rich,” he said. “The every day experience of riders today is one where you literally have to fight your way onto these trains and that’s if they come.”

Mr. Van Bramer, who opposes the nearly $2 billion in incentives Amazon was promised from the state, said he had taken the No. 7 train to City Hall on Monday morning and urged Gov. Andrew M. Cuomo and Mayor Bill de Blasio — two boosters of the Amazon deal — to do the same.

“It was packed when I got on in Sunnyside,” Mr. Van Bramer said. “It stopped and was delayed several times into City Hall this morning. That’s every day.”

In Seattle, Amazon runs commuter shuttles for its employees, and the company agreed this year to contribute $1.5 million to improve public transit. Shuttles would not work as well in New York, Mr. Van Bramer said, because Long Island City is already clogged with traffic from the Queensboro Bridge and the Queens-Midtown Tunnel.

Amazon’s New York headquarters will be located along the East River, in an area of Queens known as Anable Basin — now possibly to be rechristened Amazon Basin. There are two nearby stations on the No. 7 line: Court Square and Vernon Boulevard-Jackson Avenue, both of which have seen a major increase in ridership in recent years. There is also a stop on the city-run ferry system, though ferries carry far fewer commuters than trains.

Some Amazon employees could live in Manhattan and take the subway to Queens, in the opposite direction as most commuters who are traveling to work in Manhattan, Mr. Byford said. Others could walk or bike. 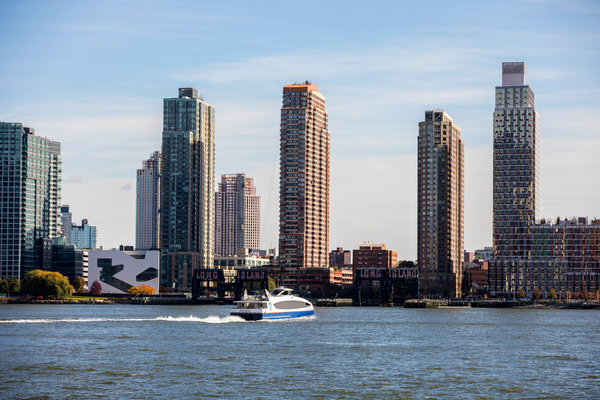 “I don’t think we need to assume that all of them will be piling on the 7 line,” Mr. Byford said.

A contingency of Amazon workers might also live in Brooklyn and take the G train to Long Island City. The G train — the only major subway line that does not travel to Manhattan — has long been mocked for its truncated trains that are shorter than station platforms. But its ridership is growing and when another subway line, the L train, is shut down next year for repairs, trains on the G line will double their length from four cars to eight.

Mr. Byford said he would consider allowing G trains to stay in their longer configuration after the L train closure to accommodate Amazon workers, noting that he would have to consider ridership levels and how many train cars are available.

But Mr. Van Bramer said the transit agency should be thinking much more ambitiously in preparing for Amazon’s impact.

“It’s like putting your finger in the hole of a dam that’s about to collapse,” he said. “It’s just not going to be enough.”

During his meeting with Amazon, Mr. Byford said he had trumpeted his broader vision for the subway: A sweeping modernization plan, known as Fast Forward, that could cost $40 billion over ten years. But his proposal has not been funded. And now the M.T.A. says it needs additional funding to avoid huge fare increases or severe service cuts.

Transit advocates have called on Mr. Cuomo, a Democrat who controls the subway, to approve a transit funding plan in Albany next year, including a proposal known as congestion pricing that would toll drivers entering the busiest parts of Manhattan.

“If Albany doesn’t approve congestion pricing this year and fund Fast Forward, all of the things Andy Byford is promising Amazon are all of a sudden a lot more precarious,” said Nick Sifuentes, executive director of Tri-State Transportation Campaign, an advocacy group.

The No. 7 line is currently being upgraded with a new signal system that should allow the agency to run two additional trains each hour. But an extra two trains would only carry about 2,500 additional passengers each hour — a small portion of Amazon’s eventual work force, Mr. Sifuentes noted.

Amazon’s decision has also brought renewed attention to a proposal by Mr. de Blasio to build a streetcar along the waterfront in Brooklyn and Queens, formally known as the Brooklyn-Queens Connector, or BQX. But the plan has stalled over questions about how to pay for it.

In announcing the Amazon deal, Mr. de Blasio said it reinforced the need for a streetcar in the area where, he said, the “gravity economically in New York City is shifting to the Brooklyn and Queens waterfront.”

“The BQX is going to be a crucial part of the equation,” Mr. de Blasio said.

Some transit advocates were disappointed that the state did not require Amazon to pay for transit upgrades as part of the deal. There is a model for such an agreement: In 2015, a developer won approval to build a skyscraper near Grand Central Terminal in exchange for $220 million in transit upgrades near the site.

The deal included a provision for Amazon to pay into an infrastructure fund controlled by the city’s Economic Development Corporation to fund neighborhood improvements like sidewalks, utility relocations, transportation and public spaces. But some criticized the fund as too small and narrow.

“It’s not like it goes to buses or improving the subway,” Mr. Sifuentes said. “It wouldn’t make much of a dent.”