SACRAMENTO — One day before a Minneapolis jury convicted a former officer of murdering George Floyd, police officers answering a complaint about someone loitering in a park in the Bay Area suburb of Alameda pinned Mario Arenales Gonzalez to the ground facedown, using their knees, elbows and forearms.

As he cried out, “Please don’t do that to me,” they pressed him into the dirt by a sidewalk, his hands cuffed, for about five minutes until he lost consciousness and went limp. Not long after, Mr. Gonzalez, 26, was declared dead.

An analysis of body camera footage by The New York Times found that the April 19 death occurred after one officer appeared to keep his knee on the upper right side of Mr. Gonzalez’s back for 2 minutes 50 seconds. During the five minutes they restrained him, the officers appeared to be concerned about Mr. Gonzalez’s ability to breathe.

The city of Alameda said in a statement this week that it was “committed to full transparency and accountability in the aftermath of Mr. Gonzalez’s death.” The offices of the Alameda County sheriff and district attorney are conducting an investigation, as is a private law firm hired by the city. In a statement on Saturday, the Alameda Police Department called the situation “a terrible loss of life.” The results of an autopsy have not yet been released.

Examining the footage, Ed Obayashi, a California-based expert in law enforcement training and the use of police force, said the officers who restrained Mr. Gonzalez appeared to disregard training that had for years been standard for law enforcement officers in the state.

At one point, one of the officers suggests that they roll Mr. Gonzalez onto his side, which Mr. Obayashi said was the position in which the police are trained to physically restrain people they have pinned down. But another officer refuses, seemingly reluctant to give up his hold on Mr. Gonzalez. “I don’t want to lose what I got,” he says. 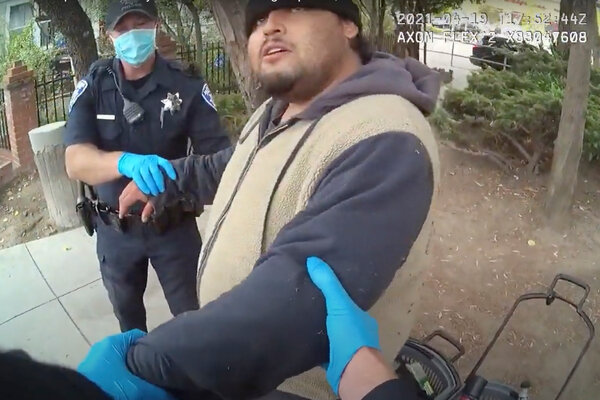 “There are always hard questions on these cases, but this one is going to be agonizing,” Mr. Obayashi said.

Alison Berry Wilkinson, a lawyer representing the officers, said the footage “isn’t the whole story.” The officers took pains to pin Mr. Gonzalez down by his shoulder blades and arms, rather than his torso, in accordance with their training, she said, and kept their weight on the balls of their feet, not on Mr. Gonzalez.

But Mr. Gonzalez was bucking so fiercely on the ground, she said, that he knocked a set of keys out of the pocket of one officer. They could not simply step away from him, she added, because he was so disoriented and intoxicated that they feared he might hurt himself or other people.

“They are heartbroken at the outcome of this,” Ms. Wilkinson said. “They were there to help. They were there to make sure he didn’t hurt himself or get injured in any fashion, but in his effort to get away, Mr. Gonzalez didn’t allow that to be an option.”

At a news conference this week, Gerardo Gonzalez said his brother had posed no threat to himself or others. “Alameda police officers murdered my brother,” he said.

The death, which followed a benign encounter that eventually escalated, was described on Wednesday by civil rights lawyers and law enforcement experts as a reminder that police officers continue to use some of the same restraint techniques that led to Mr. Floyd’s death under the knee of Derek Chauvin.

John Burris, an Oakland lawyer who has long specialized in police abuse cases, said the risk inherent in pinning people facedown as police officers did to both Mr. Floyd and Mr. Gonzalez was “common knowledge” in law enforcement.

“But they still do it,” said Mr. Burris, who represented Rodney King in his civil rights lawsuit against the Los Angeles Police Department. “Why do they still do it? It’s the rush of business. People get caught up in doing their thing and they forget their training.”

Mr. Burris and Mr. Obayashi said it was unclear why the three officers who were put on leave — Eric McKinley, Cameron Leahy and James Fisher — needed to detain Mr. Gonzalez.

“Hey bud, how’s it going?” he asks Mr. Gonzalez, who is meandering at the edge of a park, near a leafy street of houses. “Just coming to check on you to see if you’re OK. Someone said you’re maybe not feeling that great.”

Officer McKinley asked Mr. Gonzalez if he was thinking about hurting himself, and Mr. Gonzalez responded, “It’s not like that.” Mr. Gonzalez, disheveled, held a comb and spoke incoherently, occasionally combing his upper lip. At his feet were two shopping baskets filled with liquor. If the officers were able to identify him and check that he had no warrants, Officer McKinley told him, they could all “be on our merry way.”

In audio recordings of the 911 calls that prompted the police to approach him, one caller said Mr. Gonzalez had been loitering for about a half-hour and appeared to be breaking store security tags off alcohol bottles. Another said Mr. Gonzalez was talking to himself at a fence near the caller’s backyard.

“He seems like he’s tweaking, but he’s not doing anything wrong,” the caller told the dispatcher, suggesting that he appeared to be on drugs. “He’s just scaring my wife.”

When a second officer arrived after about seven minutes, the encounter escalated as the officers repeatedly asked Mr. Gonzalez for his name and identification, but also instructed him to keep his hands out of his pockets. When he hopped onto a tree stump, they told him to come down and then grabbed his arms, pulling them behind his back to handcuff him.

Heavyset with thick arms, Mr. Gonzalez began to cry out and protest as the officers told him to stop resisting. Twelve minutes and 15 seconds into the encounter, the officers brought him to the ground and began holding him there, facedown, pulling his arms back.

Two minutes and nine seconds later, he cried out in pain as they apparently handcuffed him. “Mario, we need you to stop resisting us,” one of the officers said. “OK?”

A half-minute later, with Mr. Gonzalez handcuffed, the officers ask what to do next, and decide, as one puts it, to “just keep him pinned down.”

An officer then appeared to push heavily on Mr. Gonzalez as he stood, placing his knee on Mr. Gonzalez’s upper back, his foot visibly off the ground. In Mr. Chauvin’s trial, a respiratory physiology expert singled out a similar moment when the officer’s full weight was bearing down on Mr. Floyd.

“Oh my gosh,” Mr. Gonzalez groaned. As they appeared to keep up the pressure, they asked again for his birthday; Mr. Gonzalez, who could barely talk, whimpered, “Libra.”

Not long after, they realized he was unresponsive and rolled him onto his side, then his back, before beginning chest compressions. “Mario! Mario! Wake up!” they cried.

The analysis of the body camera footage by The Times showed that Mr. Gonzalez appeared to be on the ground for 5 minutes 5 seconds. The officers applied some form of pressure on his back for 2 minutes 50 seconds.

The pressure, the analysis showed, happens largely for a few seconds at a time, though one of the officers appeared to keep a knee on the upper right side of his back for all of the 2 minutes 50 seconds they were applying pressure on him.