STATELINE, Nev. — From the casino where she works, Nathalia Bonifacio watched the world flee. Thousands of tourists, homeowners and workers who keep the economy humming along Lake Tahoe streamed out of town in the last two weeks as a wildfire roared closer through the Sierra Nevada.

Where could she run to? Ms. Bonifacio, 21, a college student from the Dominican Republic, had landed in the United States three months earlier to work at one of the high-rise casinos that flank the Nevada shoreline of the mountain lake. She had no family here. She could not afford a hotel room in the nearby towns, jammed with more than 20,000 evacuees.

So as ash from the Caldor fire snowed on Lake Tahoe, Ms. Bonifacio and a handful of other workers stayed behind. They have since become an unsung pit crew working the country’s highest-priority wildfire, feeding and refueling thousands of firefighters arriving here to battle a blaze the size of Dallas. 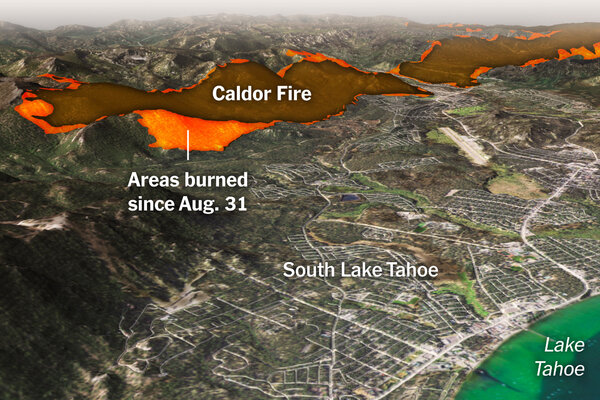 Caldor Fire’s March to the Edge of South Lake Tahoe

The Caldor fire is now the second-largest fire actively burning in California, a state that sets new records for wildfires each year.

Eight miles from charred front lines of the fire, a cluster of Vegas-style hotels on the California-Nevada border has morphed into a base camp for emergency workers. With boutique hotels and alpine lodges shuttered on the California side of the border, fire trucks now occupy valet parking spots in the Nevada-side casinos. Exhausted fire crews accustomed to camping in the woods trundle takeout pizza up to their rooms.

While hundreds of hotel employees joined the mass evacuation from Tahoe, skeleton staff who decided to stay now serve quesadillas and iced coffee to hundreds of emergency responders filling the rooms. They check in guests and pick up trash. They send up clean sheets and towels to replace linens suffused with ash. They endure the smoke wafting through the hallways like some phantom guest.

“It’s a disaster,” said Ms. Bonifacio, whose asthma is aggravated by the smoky air.

Some of the remaining staff are managers and lifelong residents from Tahoe and surrounding towns. Others are immigrants from Southeast Asia and Latin American college students on temporary visas who come to do the unglamorous work of washing dishes and changing sheets.

Between shifts, the remaining workers gaze out the window as smoke strangles the lake’s diamond waters. They trade rumors about how the fire might have started (its cause is still being investigated) and reassure anxious relatives back home that they are not in danger.

Bored after nearly a week indoors, they kill time watching movies, chatting with friends on WhatsApp and roaming the carpeted casino floors where slot machines glow idly and brassy Rat Pack tunes play on a loop for nobody.

The signs thanking firefighters in people’s yards around Tahoe do not mention the backstage support from workers like Ms. Bonifacio. But she and others who stayed said the past week stuck in a fire zone had made their workaday routines more meaningful.

Not that it has been easy.

The smoke stings their eyes, and Ms. Bonifacio said she has barely been outside over the past week as firefighters raced to herd the fire away from the cabins and condos and businesses around the lake.

Firefighters have made steady progress containing the fire with the help of lighter winds, and on Sunday night, lifted evacuation orders for South Lake Tahoe. The fire, which has destroyed nearly 700 homes, had been 44 percent contained by Sunday evening, Cal Fire reported.

Ms. Bonifacio had never lived through a wildfire when she joined dozens of other young Dominicans who signed up to spend a summer beside Lake Tahoe as part of a temporary work program. She was eager to earn $14 an hour, money she was saving for medical school and to send back to her family.

Last Monday, as the blaze charged toward the largest towns beside Lake Tahoe, she decided not to board the buses whisking other hotel employees out of town.

Ms. Bonifacio and a few Dominican friends threw everything they owned into suitcases and retreated from their apartments to the hotels where they work as dishwashers, cleaners, cashiers and delivery workers. The casino hotels were not shutting down, and offered free rooms to workers who stayed on.

On the ground floor of the Montbleu Resort Casino, Ulycees Beltran spent another evening taking dinner orders from firefighters coming off the line. In a town where people once enjoyed flights of microbrew and Dungeness crab sandwiches after days paddle boarding in the lake, Mr. Beltran’s half-priced menu of nachos and burgers now represented the beginning and end of Tahoe’s culinary scene.

His husband and two dogs fled to Los Angeles, but Mr. Beltran decided to stay. He was powerless to control whether the fire swarmed through South Lake Tahoe and destroyed the home he had bought 15 years ago, but he could at least slip on his black face mask and feed people.

“We cannot go anywhere, but at least we can come in and help,” he said. “I’m OK and my family’s OK. They’re safe. I’m working.”

Tim Tretton, the general manager at the MontBleu, said the hotel was fulfilling “our obligation to serve those who are protecting our community.” Across the street at the Hard Rock Hotel and Casino, the staff has organized movie nights and delivered food to evacuees outside the fire zone, said Eric Barbaro, the hotel’s marketing director.

Nearly every business along U.S. 50, the main road through South Lake Tahoe has been locked and dark for more than a week. Red NO VACANCY lights hummed outside empty motels one recent morning.

And then there was American Gasoline, where Stefka Dimitrova was rushing to unload a shipment of diesel canisters. Ms. Dimitrova said she had emigrated from Bulgaria decades earlier in a time of economic turmoil, and refused to flee the mountain home and gas station she had owned for nearly 20 years in South Lake Tahoe, Calif. When the fire swept through, she turned on her sprinklers and started sleeping in a trailer just beside the gas pumps.

“What happens if somebody drives by and needs gas?” she asked. “Everybody needs help.”

She is doing a brisk business in beef jerky, chewing tobacco and cold coffee, and the out-of-town firefighters, unaccustomed to Tahoe’s chilly nights, are snapping up knit hats. Everyone wants gas and fuel for their generators.

On Friday morning, as Ms. Dimitrova set out a pot of coffee, George Sandoval, a privately employed firefighter, pulled up on his way to clear brush around homes.

“Most of them don’t know I’m open,” Ms. Dimitrova said.

On the 15th floor of her hotel, Ms. Bonifacio and three friends are sharing a two-bedroom and wondering the same question as the thousands who fled: When will all this be over.

Though they are still getting paid, the banks are shut down and they cannot send money home. Ms. Bonifacio has been getting anxious about finding a ride to Reno for her return flight on Sept. 11. She has yet to visit a government office and fill out the paperwork to arrange another summer’s work.

“We’ve lost so much time,” she said. “Maybe next year it’ll be different.”