New York governor Andrew Cuomo is facing accusations that he groped one of his aides at his official residence late last year.

It is the most serious allegation against the embattled governor to date after he was accused of harassment by five other women.

An unidentified female aide was summoned to the governor’s executive mansion in Albany last year to help Mr Cuomo with his phone, The Times Union of Albany reports.

She was alone with Mr Cuomo when he closed the door, reached under her shirt and fondled her.

The newspaper’s report is based on an unidentified source with direct knowledge of the woman’s accusation.

Through a spokesperson on Wednesday, Mr Cuomo said: “I have never done anything like this. The details of this report are gut-wrenching.”

It comes a day after a former federal prosecutor and employment lawyer were appointed to investigate the allegations.

He added that he would not speak to the specifics of this or any other allegation, given an ongoing investigation overseen by the state attorney general.

Mr Cuomo has called on lawmakers and the public to await the results of the investigation into allegations against him. He has repeatedly said he will not resign. 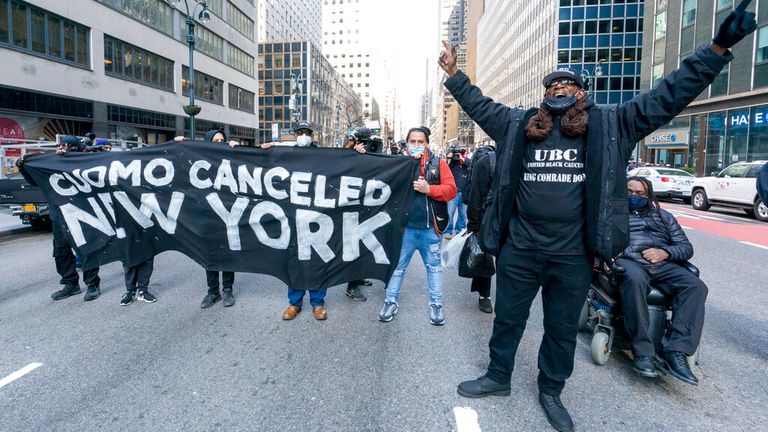 He has been under fire for weeks, beginning with revelations that his administration withheld details from the public about the number of COVID-19 deaths among residents in state nursing homes.

Last week, Mr Cuomo apologised following sexual harassment allegations against him but refused to stand down.

The Democrat said he had “learned an important lesson”, adding: “I now understand that I acted in a way that made people feel uncomfortable.

“It was unintentional and I truly and deeply apologise for it.”

The governor said he had never touched anyone inappropriately but he did admit it was “custom” for him to greet people with kisses and hugs.

When he was asked about stepping aside, the third-term governor replied: “I wasn’t elected by politicians, I was elected by the people of the state of New York. I’m not going to resign.”

Former aide Lindsey Boylan, 36, said Mr Cuomo harassed her during her employment and once suggested a game of strip poker aboard his state-owned jet.

Another former aide, Charlotte Bennett, 25, said he had asked her if she ever had sex with older men.

Mr Cuomo, 63, denied both allegations and dismissed his behaviour as a way of being “playful”.

The third accuser, a woman named Anna Ruch, said Mr Cuomo touched her back and face and asked to kiss her moments after they met at a wedding in 2019.