A street-smart U.S. attorney, he won a conviction against the Mafia boss after several previous efforts failed. 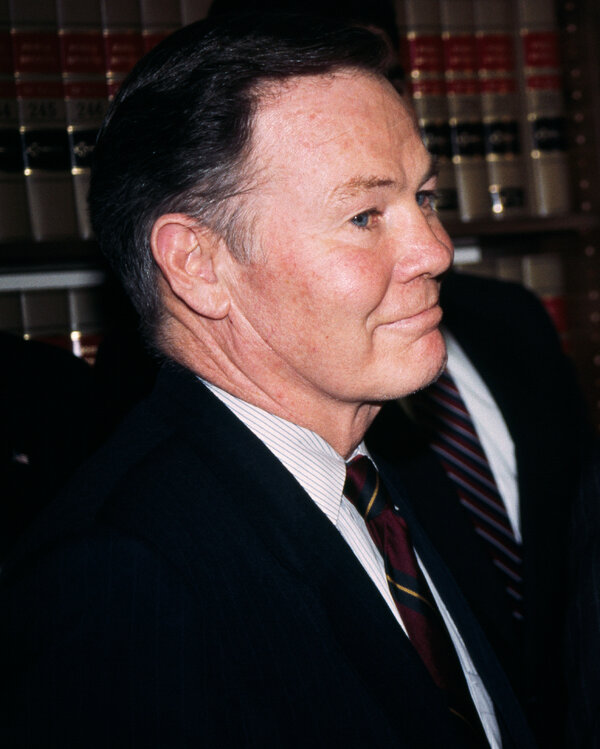 Andrew J. Maloney, the United States attorney in Brooklyn who shattered the myth of the Teflon Don with the successful prosecution of the flamboyant Mafia boss John J. Gotti, died on Monday in Greenwich, Conn. He was 90.

His son Andrew, also a former federal prosecutor, said the cause of death, at a hospital, was heart failure.

Mr. Maloney, a street-smart graduate of West Point and a college boxing champion, was the United States attorney for the Eastern District of New York, heading the Justice Department office responsible for Brooklyn, Queens, Staten Island and Long Island, from 1986 to 1992.

Early in 1992, in a rare step for a U.S. attorney in a big-city district, he participated in the trial that sent Mr. Gotti — the reputed boss of what was then the nation’s largest, most powerful Mafia group — to prison for murder and racketeering.

Mr. Gotti had gained the nickname the Teflon Don because the charges against him in three previous federal and state cases did not stick. One of those trials occurred in the Eastern District in 1986, shortly after Mr. Maloney took over the office, though the case had been prepared before he arrived.

The case assembled under Mr. Maloney dealt largely with Mr. Gotti’s crimes in taking over and running the Gambino family’s criminal operations. It benefited from taped conversations of Mr. Gotti from electronic bugs planted in and around his headquarters, and the decision by a top Gotti henchman, Salvatore Gravano, nicknamed Sammy the Bull, to testify for the prosecution.

“We knew what John Gotti was and is, and it warranted this kind of effort,” Mr. Maloney said at a news conference after the verdict.

Delivering the prosecution’s opening statement and one of its summations, Mr. Maloney told the jury in Federal District Court in Brooklyn that “this is a case about a Mafia boss being brought down by his own words” and “his own right arm.”

At one point, he raised his hand and pointed an imaginary pistol at Mr. Gotti. The Don wanly smiled, and the prosecutor squeezed the trigger.

Otherwise, Mr. Maloney left the conduct of most of the trial to the chief of his organized crime unit, John Gleeson, who later became a federal judge.

Mr. Gotti was convicted and sentenced to life in prison. He died of cancer in 2002 at 61.

“Today’s verdict by a courageous jury is the end of a very long road,” Mr. Maloney said at the news conference. “Justice has been served, and it feels awfully good.”

Andrew Joseph Maloney Jr. was born in the Greenpoint section of Brooklyn on Oct. 6, 1931. His father was a World War I combat veteran who worked for the city as an elevator engineer. His mother, Nora (Walsh) Maloney, was a homemaker who had immigrated from Ireland as a child.

Andrew Jr. graduated in 1954 from the United States Military Academy at West Point, where he was an intercollegiate boxing champion, and later served with the Army Rangers.

After leaving the military, Mr. Maloney worked as an engineer for the city while attending Fordham University Law School at night. He graduated in 1961 and went to work as an assistant United States attorney in the Southern District of New York, which covers Manhattan, the Bronx and six downstate counties.

He worked there for a decade, then served for two years as the regional director of the Justice Department’s Office of Drug Abuse Law Enforcement before entering private practice. President Ronald Reagan appointed him United States attorney for the Eastern District in 1986.

In a region and a profession dominated by big egos, Mr. Maloney assiduously eschewed the limelight, often giving his top lieutenants control of high-profile cases, and sharing the credit when his office won.

“He understood the impact of the power that prosecutors wield and how really important it is to keep your humility and your moral compass about that,” Mary Jo White, who worked as his deputy and later served as U.S. attorney for the Southern District, said in a phone interview.

Mr. Maloney’s affable, easygoing demeanor stood in contrast with the aggressive intensity of Rudolph W. Giuliani, who before becoming mayor of New York was U.S. attorney for the Southern District during part of Mr. Maloney’s Eastern District tenure. They were often rivals for cases in which either district could claim jurisdiction.

He butted heads with Mr. Giuliani’s successor, Otto G. Obermaier, and with Robert Morgenthau, the Manhattan district attorney, over which office should prosecute Mr. Gotti. In late 1990, the three traveled to Washington to have the dispute settled by the Justice Department, which decided in Mr. Maloney’s favor.

Mr. Maloney’s office also won convictions of the reputed bosses of the Lucchese and Bonanno crime families, and of Asian American gang members who committed murders and extorted businesses. It obtained a guilty plea from the giant Beech-Nut Nutrition Corporation for having sold sweetened water as pure apple juice for babies.

But the office had mixed results in a six-month trial in which three mobsters were convicted, but five acquitted, of conspiring to skim tens of millions of dollars by controlling the awarding of window installation contracts in public housing.

His office obtained a conviction in 1991 against one of New York State’s most powerful politicians, Mel Miller, the Assembly speaker, for defrauding clients in his private law practice. Mr. Miller was expelled from the Assembly, but the verdict was overturned by an appeals court. The court held that while Mr. Miller’s acts “may not have been a model of candor and disclosure,” they were not crimes. Mr. Miller did not seek elective office again and died in 2019.

In 1992, Mr. Maloney’s office indicted the Colombian drug lord Pablo Escobar and a cartel hit man, Dandeny Munoz-Mosquera, on federal terrorism charges for blowing up an Avianca airliner, killing 110 people, including two Americans. Mr. Munoz-Mosquera, who was already in custody, was tried and sentenced to 10 life terms. Mr. Escobar was killed in 1993 without having been tried in the case.

Mr. Maloney and his wife had lived in Larchmont, N.Y., and then nearby Mamaroneck before she died. At his death he had been residing with his son Andrew in Greenwich.

As the U.S. attorney, Mr. Maloney had understood the power his office afforded and had used it sparingly.

He declined to prosecute Mayor David N. Dinkins in 1991 after investigating accusations that before becoming mayor Mr. Dinkins had provided a fabricated document relating to a disputed stock transaction involving Mr. Dinkins and his son. Though Mr. Maloney said he had found evidence of wrongdoing, he concluded that it was not enough to win the case.

A year later, he turned over to Justice Department officials in Washington supervision of his office’s investigation into whether Senator Alfonse M. D’Amato, Republican of New York, had improperly influenced the distribution of subsidized housing in his hometown, Island Park, on Long Island.

He said he wanted to avoid any appearance of conflict of interest because the senator had recommended him for United States attorney. Mr. D’Amato was not charged.

“He said you never get into trouble being too tough as a prosecutor,” Ms. White said, “but you have to do the right thing.”