An analysis found that a hand recount of votes by Republican investigators missed thousands of ballots, and possibly many more. 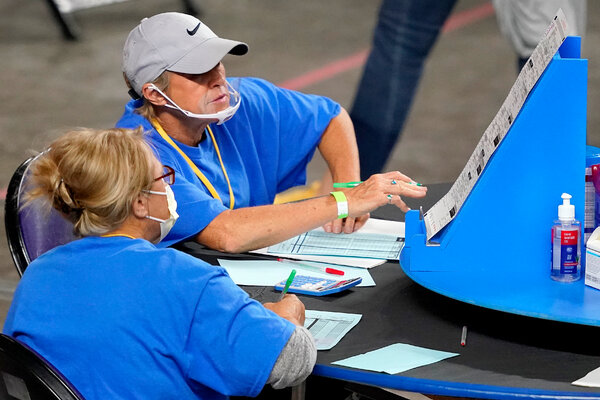 By Michael Wines and Nick Corasaniti

The circus-like review of the 2020 vote commissioned by Arizona Republicans took another wild turn on Friday when veteran election experts charged that the very foundation of its findings — the results of a hand count of 2.1 million ballots — was based on numbers so unreliable that they appear to be guesswork rather than tabulations.

The organizers of the review “made up the numbers,” the headline of the experts’ report reads.

The experts, a data analyst for the Arizona Republican Party and two retired executives of a Boston-based election consulting firm, said in their report that workers for the investigators failed to count thousands of ballots in a pallet of 40 ballot-filled boxes delivered to them in the spring.

Investigators went through more than 1,600 ballot-filled boxes this summer to conduct their hand recount of the election in Maricopa County, the most populous county in the state. Both they and the Republican-controlled State Senate, which ordered the election inquiry, have refused to disclose the details of that hand count.

But a worksheet containing the results of the hand count of 40 of those boxes was included in a final report on the election inquiry released a week ago by Cyber Ninjas, the Florida company hired to conduct the inquiry.

The three election experts said that the hand count could have missed thousands or even hundreds of thousands of ballots if all 1,600 boxes of ballots were similarly undercounted. Their findings were first reported in The Arizona Republic.

But given the large undercount found in just a sliver of the 2.1 million ballots, it would effectively be impossible for the Republican investigators to arrive at such precise numbers, the experts said.