The Contreras fire has disrupted the work of astronomers, though the observatory’s scientific equipment remains safe for now. 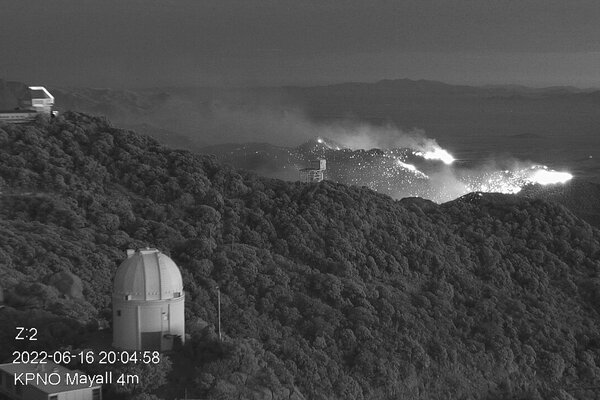 Astronomers watched in fear over the past week as a growing wildfire crept up an Arizona mountainside toward the Kitt Peak National Observatory, forcing 40 people to evacuate days before the blaze destroyed four buildings early Friday morning.

The fire, known as the Contreras fire, has scorched more than 18,000 acres, twisting among Indigenous-populated areas in the state near Tucson, and scientists might not be able to return to the observatory for weeks. But its telescopes, which number in the dozens, remained safe as of Sunday afternoon, officials said, and only the four buildings, which were not used for research, were destroyed.

Firefighters have contained 40 percent of the fire’s perimeter despite the excessive Southwest heat wave slowing their efforts, and, since the fire had not caused extensive damage to the area, the Indigenous community of Pan Tak, which had evacuated, was preparing to return. Fire crews will continue to patrol the area.

Although the fire has crested, and the threat to the observatory appears to have decreased, the close call represents a new facet of climate disasters: the endangerment of science and research.

Dr. David Schlegel, an astrophysicist in a research group that relies on Kitt Peak’s cutting-edge Mayall Telescope, said that more extensive fire damage, which might still be discovered among the technological equipment, could “pause the progression of cosmology for years to come.”