ORANJESTAD, Aruba — Why should the world be paying attention to the election of a woman to lead a coalition government in an autonomous territory within the Kingdom of the Netherlands? Because it may just answer the question: “What if a country was run by women?”

“Aruba gives us opportunity,” said Prime Minister Evelyn Wever-Croes, who last year became the first woman to ascend to the post in the country after a complicated election in which she was charged with forming its first coalition government in 16 years.

Although women have risen to such leadership positions in much larger nations — like Margaret Thatcher of Britain or Angela Merkel of Germany or Michelle Bachelet of Chile to name just a few — Mrs. Wever-Croes’s election is significant, coming at a time when women’s ascent into top decision-making roles globally has sputtered.

Unlike some of her counterparts, she is not just a woman in a top leadership position overseeing a government mostly run by men. Many women hold top jobs in the Aruban government, and Mrs. Wever-Croes wants to find more.

Her job is more challenging than it might seem. Despite the island’s year-round sunny weather and pristine beaches, it has a long, complex history and is facing challenging financial issues — it has both a budget deficit and a rising national debt and is under financial supervision of the Dutch government in The Hague. Aruba left the group of Caribbean islands known as the Netherlands Antilles in 1986 but remained part of the Netherlands.

Failure to meet the terms of financial supervision would result in direct intervention by the Dutch in Aruba’s domestic financial affairs, even though the island has autonomy in local matters.

Mrs. Wever-Croes, who was born into a family of politicians, said she had not intended to seek elected office until she found herself running out of excuses not to. “Someone has to do it” she says, and adds, “you can’t just look at a situation and complain.”

Her first job was in Aruba’s tax department after she graduated from Universiteit Leiden in the Netherlands. Thirteen years later, after rising to lead the office of the Tax Inspectorate, she left for private practice as a tax attorney while raising her family. She returned to politics when she was elected to Parliament in 2009.

She is now 52 and a grandmother.

Getting more women to run for political office is a priority for her, as is refusing to accept the first “no” she hears from those she asks. Women often list the same reasons she initially gave for not wanting to enter politics — private sector career, family, personal life — so initially she accepted it.

Now, she responds with an additional push. “Staying in our comfort zone won’t bring us the change we need for our families and in Aruba,” she said.

One-third of the seats in the 21-seat Parliament are held by women, as are two of eight cabinet positions (including Mrs. Wever-Croes’s). While men far outnumber women in elected positions, women are leading in policy and influential industry posts. 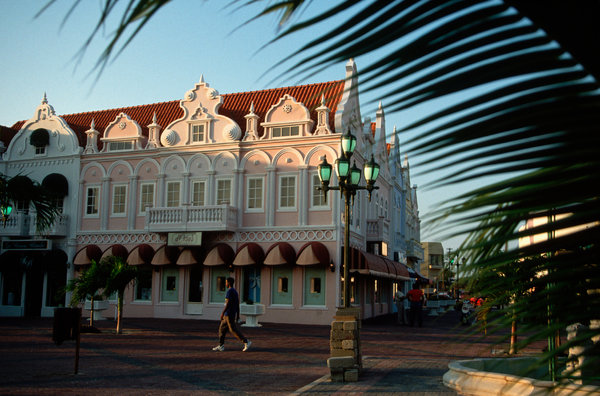 Xiomara J. Ruiz-Maduro, the minister of finance, economic affairs and culture, is a woman. She also entered politics in 2009 and was appointed to Mrs. Wever-Croes’s cabinet shortly after the prime minister took office. Her first order of business was a challenging one: To come up with budget and debt proposals that would satisfy the Netherlands.

With a growing national debt estimated at about 91 percent of gross domestic product (GDP), it was agreed that the 2018 budget deficit would not exceed the one in 2017. Aruba has seen modest economic growth in 2017 and 2018 but it is fragile in the short-term because it relies so heavily on one sector — tourism.

Mrs. Wever-Croes’s own duties include energy, integrity and innovation. Integrity is a new addition to the prime minister’s job, added by Mrs. Wever-Croes to address the decline in public trust in elected officials.

She has had to diplomatically lower expectations on the country’s sustainable energy transition during meetings at the United Nations in September, navigate the erosion of public trust in elected officials at home after a bribery scandal involving a former minister of labor, and address the sustainability of the country’s economic growth.

As these pressing issues are discussed, Mrs. Wever-Croes and Mrs. Ruiz-Maduro look across the boardroom table and, more often than not, see other women. Tourism accounts for up to 92 percent of Aruba’s GDP. The two organizations responsible for destination management and representation of travel industry interests (Aruba Tourism Authority and the Aruba Hotel and Tourism Association) have women chief executive officers. The country’s director of Economic Development is a woman, as are the five sector heads reporting directly to her.

The Central Bank of Aruba has been under the leadership and direction of the economist Jane Figaroa-Semeleer since 2008.

Then there is the country’s first chief innovation officer, the minister plenipotentiary for Aruba (representing the government’s interests in the United States) as well as the country’s appointee to the state council in the Netherlands. The council is an advisory body in the Netherlands composed of members of the royal family and other members appointed by the crown — once again, rolls occupied by women. The state council has significant legislative oversight and judicial authority.

Mrs. Wever-Croes’s path to career prominence is mirrored in those of her female peers. These are women who, immediately upon graduating from high school in the 1980s, went to university before entering the work force.

They proceeded to work hard, have children and get promoted. Not working did not appeal as an option for any of these women. “I wouldn’t know what to do with my life if I wasn’t working,” said Maria Diijkhoff-Pita, director of the Department of Economic Affairs, Commerce and Industry.

How have they achieved uninterrupted career progression, a goal that has eluded so many women? Part of the answer lies with the country’s former oil refinery. From its opening in 1928 until it closed in 1985, it was the country’s major private employer.

Automation of the refinery’s operations in 1956 ushered in a first wave of dislocation and reinvention for Aruba. Men left to work in other Caribbean countries, while the women stayed home. Many started home-based businesses to supplement family incomes, while others took positions in government or stepped into roles in the nascent tourism industry.

Girls and boys now had to leave the island for college.

For many reasons, including service to country, family responsibility and personal choice, Mrs. Wever-Croes and most of her female peers returned home upon graduation to pursue their careers rather than remaining abroad.

As the country’s economic prospects began to improve, the women were — to borrow a line from former Secretary of State Madeleine Albright — “there when the country came looking for them.”

Mrs. Wever-Croes recognizes there are still inequities in Aruba, which is why she is pushing a human-centered “Hunto Pa Aruba” (“Together For Aruba”) socio-economic plan. “Men and women, everyone needs to contribute,” she said.

The state of the country’s financial affairs is an ongoing challenge.

“I have to be frank, we’re still in crisis,” Mrs. Wever-Croes said, in a manner reminiscent of someone who has had to make difficult decisions before.

Women Leaders to Watch in Aruba

4. Mildred G.M. Schwengle, member, State Council of the Kingdom of the Netherlands

J. Kelly Hoey is a motivational speaker and author of “Build Your Dream Network.”