This will be the last weekly edition of Crossing the Border, a limited-run newsletter from The New York Times.

The end of the road

I woke up one morning some years back extremely confused: I was unsure which side of the border I was on. Was I in America? Or was I in Mexico? It was back when I regularly crossed the Southwest border as a New York Times correspondent, sometimes bunking down for a night in El Paso, for instance, and the next over in Ciudad Juárez, which from inside a darkened hotel room is really quite the same.

Most of us experience no such confusion. We know exactly where we stand when it comes to the border. In this newsletter, Times correspondents have aimed to bring the complexities of this fascinating region to life. We hope you’ve enjoyed. Although “Crossing the Border” will no longer appear weekly in your inbox, our focus on the border, all 1,954 miles of it, both sides, will not fade.

Running out of room on the border

By Mitchell Ferman in McAllen, Tex.

In March, there was widespread public alarm after a spillover of migrants in El Paso forced hundreds of them to spend days underneath a bridge with little hot food, torn Mylar blankets and gusts of desert dust.

Now, a similar crowded encampment, fenced in with portable toilets, water coolers and camouflage netting draped overhead for shade, appeared over the weekend near the border’s busiest crossing point for migrants from Central America, in McAllen, Tex. The makeshift containment area popped up next to a Border Patrol station in a bustling industrial area of the Rio Grande Valley city. It appears to be a result of the continuing stream of people crossing the southern border despite everything the Trump administration has tried to slow immigration.

The government’s attempts at deterrence have included separating migrant families, deploying American troops to the border and returning asylum-seeking immigrants to Mexico while they await an immigration court hearing. The efforts have not worked, and makeshift facilities like the new one in McAllen have sprouted up along the 1,900-mile border in recent months to accommodate the new arrivals.

Apprehensions in the Rio Grande Valley sector have averaged 1,600 a day recently, with 1,100 of those being members of families, a 250 percent increase from this time last year, according to the Border Patrol.

To deal with the increase, the Department of Homeland Security is reassigning some Transportation Security Administration staff, including federal air marshals, to the border. Two large tents with a total price tag of $37 million have been built, one in El Paso and the other 20 miles from McAllen in the border town of Donna, which has already exceeded its 500-person capacity since it opened less than two weeks ago. A Border Patrol official said the agency planned to build a second tent in Donna, next to the existing one. Plans for additional tent encampments appear to be in the works, as well.

As of last weekend, more than 8,000 migrants were in federal custody in the Rio Grande Valley, more than double the Border Patrol’s holding capacity in South Texas. The facility most migrants pass through after they’re arrested there, adjacent to the new makeshift encampment, has a capacity of 1,500.

When Senator Jon Tester of Montana toured the facility in March, he said there were 2,200 immigrants in custody, held in cages, a procedure that began under President Obama.

This week, at the makeshift camp set up in what is normally a parking lot, Border Patrol agents, at least one wearing an antimicrobial mask, tended to the migrants gathered outside. A few people could be seen leaning against fences; some slept on the ground under Mylar blankets. Those waiting outside were at the mercy of a Rio Grande spring. On Tuesday, it rained during the afternoon. But by Wednesday, people were lying under the shelter of the netted canopy, as temperatures climbed into the upper 80s. The border was heating up. 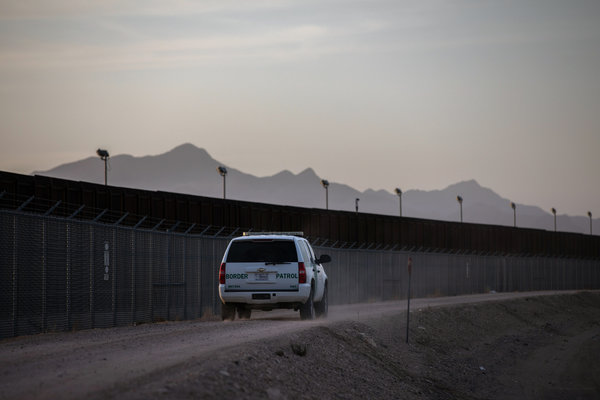 In the three months that we have been bringing you this newsletter, the border and the political debate around it have never been far from the headlines. Here’s a look at where it’s been over the last few months, and what’s expected next:

• The president has visited the border twice — at El Paso in February and at Calexico, Calif., in April. He’s tweeted or retweeted about the border more than 80 times.

• The April visit came amid a shuffle of the administration’s top immigration officials. Homeland Security Secretary Kirstjen Nielsen, who had been the public face of some of the president’s controversial immigration policies, resigned, followed by her deputy, Claire Grady. President Trump also pulled back his own candidate to run Immigration and Customs Enforcement, Ron Vitiello, saying that he wanted to go in a tougher direction; he replaced him this month with Mark Morgan, the former head of Border Patrol.

• The president has declared — and faced court battles over — a national emergency at the border; threatened — and then backed off that threat — to close the border with Mexico entirely; and won a court decision over a policy that forced people seeking asylum to remain in Mexico.

• As spring approached, border officials warned that they would struggle to deal with a growing backlog of asylum seekers and other migrants. The Border Patrol has been holding many of them in tents and sometimes keeping them outdoors before releasing them at bus stations or at respite centers run by nonprofits.

• This week, the president is expected to unveil a plan to overhaul the immigration system, scaling back decades of family-based immigration and favoring immigrants who have specific skills or job offers to work in the United States.

Do you have feedback about this newsletter? Email us at: [email protected]

Though this weekly newsletter is ending, New York Times reporting on the border is not. If you’re on Twitter, here is where you can follow the journalists who brought you this newsletter.

If you prefer your news — about the border and everything else — delivered en español, sign up for the El Times newsletter here.

You can read every installment of Crossing the Border here.