The signs of New York City’s recovery are everywhere: Vaccinations are on the rise; restaurant and bar curfews are ending; occupancy restrictions are easing in offices, ballparks and gyms. By July 1, Mayor Bill de Blasio says the city should be “fully reopened.”

After more than a year of death and economic devastation, New York is lurching into a new and uncertain phase of recovery — and the candidates vying to be the city’s next mayor are making radically different bets about the mood and priorities of New Yorkers, and how best to coax the city back to life.

As the mayoral candidates barrel toward the June 22 Democratic primary, sharp distinctions are emerging around how to address this immense task.

Andrew Yang, the former presidential candidate and current front-runner, has positioned himself as the city’s ultimate cheerleader in the race, and he has made accelerating the reopening of the city a central plank of his messaging. Scott M. Stringer, the city comptroller, describes a series of crises facing New York and promises to be a progressive mayor who will “manage the hell out of the city.”

Maya Wiley, a civil rights lawyer who is particularly focused on matters of racial justice, often urges a “reimagining” of a more equitable city following the pandemic. And Eric Adams, the Brooklyn borough president, suggests that public safety is a prerequisite for progress and speaks often of his experience as a Black former police captain who pushed for change within the system.

“I don’t want to hear people say, ‘We want to have New York City be just happy again,’” Mr. Adams said at a recent campaign appearance in Queens, even as he promised brighter days ahead. “To too many New Yorkers, the city was never happy.”

The matter of how the city recovers plainly resonates with New Yorkers: A recent Spectrum News NY1/Ipsos poll found that 34 percent of likely Democratic primary voters surveyed viewed reopening businesses and the economy as the top priority for the next mayor, second only to stopping the spread of Covid-19 and closely followed by crime and public safety. 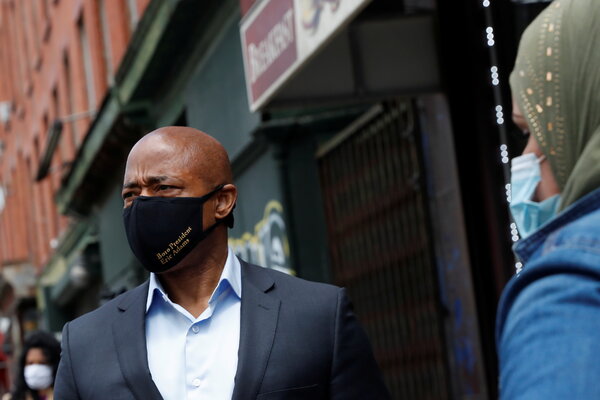 The challenge for all the candidates is to offer the right mix of experience and empathy, energy and vision, to engage a diverse electorate that experienced the coronavirus crisis and its fallout in very different ways.

More than any other candidate, Mr. Yang expects that New Yorkers, after a desperately challenging year, want a hopeful mayor with a simple message about reopening the city quickly.

Part of Mr. Yang’s lead in the sparse public polling available can be attributed to name recognition from his presidential campaign, but a number of veteran Democratic strategists say he has also settled on a tone that resonates with many voters eager to move on from the pandemic.

“It’s the spring of 2021, not the spring of 2020, and New Yorkers are increasingly optimistic and hopeful about the future,” said Howard Wolfson, a longtime adviser to former Mayor Michael R. Bloomberg, who is neutral in the race. “So far, Andrew Yang is the person who has best captured that sentiment.”

He and his competitors agree that New York must be reopened as a more vibrant and equitable place than it was when it closed, and they are putting forth a wide range of policy prescriptions and arguments around leadership skills to illustrate how they would do just that.

Mr. Yang, who says he wants to be the anti-poverty mayor, has unveiled a range of policy proposals around vital city issues, many of which begin with a simple prescription: accelerate the opening of the city and cheer on New York’s promise. On Tuesday, for instance, he urged the state to loosen restrictions on bars and restaurants, saying that reopening those establishments was “mission critical.” He has also proposed a basic income program for the poorest New Yorkers, a less expansive version of the universal basic income he promoted as a presidential candidate.

But a big part of his strategy also involves attending reopening events — like Opening Day at Yankee Stadium — and declaring that New York must be open for business. He has promised to host “the biggest post-Covid celebration in the world.”

The test for Mr. Yang will be whether voters believe he has sufficient managerial experience and knowledge of the city to execute the complicated rebuilding efforts that he likes to applaud. And his efforts to cheer on city businesses do not always land: He recently had a disastrous appearance before a prominent L.G.B.T.Q. Democratic organization, where participants felt that he was more focused on discussing gay bars than matters of policy.

“We need somebody who’s going to steer the ship, but not overpromise — don’t tell me we’re going to be Disneyland next week,” said Donovan Richards, the Queens borough president. He was speaking broadly about the field, but when asked which candidates were striking the right balance in tone, he pointed to Mr. Adams and Ms. Wiley. He intends to make an endorsement in the coming days.

Several of Mr. Yang’s rivals have argued that he is ill-equipped to lead the city at a moment of staggering challenges. Many are working to draw sharper contrasts with him, an effort that may culminate in the first debate, on May 13.

A number of candidates believe that the electorate — while convinced of New York’s strengths and hopeful about its future — also wants an experienced government veteran who exudes knowledge of the political system in discussing how to navigate recovery.

Shaun Donovan, the former Obama administration housing secretary, is seeking to brand himself “the man with the plan,” issuing a 200-page proposal with ideas ranging from launching a skills-based training program to facilitate employment opportunities, to creating “15-minute neighborhoods” in an effort to make good schools, transit and parks more accessible. He often notes his time working with President Barack Obama and President Biden to illustrate his ability to manage high-stakes moments for the country.