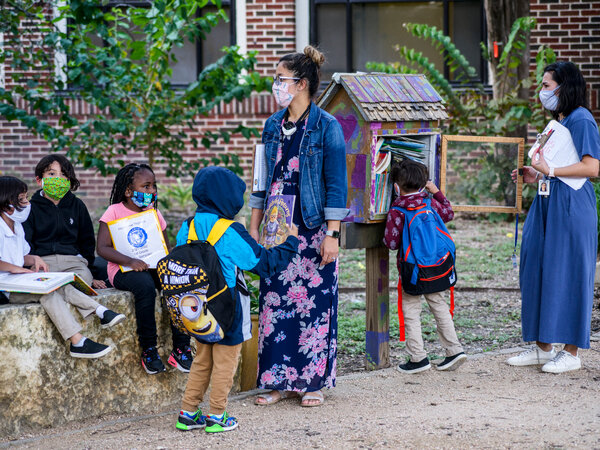 American schoolchildren are heading back to classrooms: All of the 100 largest districts in the country, including the biggest urban districts in every state, are fully reopening schools this fall, according to new data.

But their Covid safety precautions look different across the country. Fifty-three percent of districts are requiring that all students wear masks, according to data as of Thursday, a sharp increase in the last two weeks. The share of schools providing an all-virtual option for some students has doubled in that time, to eight in 10, as families express concern about the Delta variant. The districts not providing one, including New York City, are now the minority.

Just seven districts — including Baltimore, Los Angeles and St. Louis — are requiring regular Covid-19 testing of staff and students. Three are requiring it for staff. Four districts — Cincinnati, Denver, Washington, D.C., and San Francisco — are requiring that school staff be vaccinated, though more are coming. On Wednesday, California became the first state to require school staff to be vaccinated or undergo regular testing (New York City is also requiring this), and on Thursday, the nation’s largest teachers’ union said it supported such a policy. Just one district, in Hawaii, is requiring eligible students to be vaccinated, and only the athletes.

The data was collected by the Center on Reinventing Public Education at the University of Washington, which has been tracking districts’ responses to the pandemic since it began. It shows that the country has reached a new consensus — that children need to be in school. But it also reflects a country in limbo as the Delta variant spreads, especially among the unvaccinated, which includes all children under 12.

“For the third year in a row, districts are in a really challenging position, needing to accommodate two conditions — keeping kids safe and healthy, and keeping kids learning,” said Bree Dusseault, who leads the data-collection effort at the center. “We know they need to be back in school, but we also know that districts are not all creating conditions where families feel safe sending their kids back in person.”

Even though a significant share of schools never fully opened in the last school year, particularly on the West Coast, the evidence showed that classrooms were safe, as long as schools used mitigation measures like masking, distancing and ventilation. But with the arrival of the Delta variant, which is much more contagious, and with high community spread in much of the country, some parents are questioning whether last year’s evidence still applies.

Many physicians and scientists say, for now, the answer is yes.

“What we do have is a year’s worth of experience with the virus and what works and what doesn’t work — and we know that masks work really, really well,” said Dr. Yvonne Maldonado, a professor of pediatric infectious diseases and epidemiology at Stanford, who has worked with school districts and the American Academy of Pediatrics on recommendations. “If you’re keeping sick people out of school, you’re masked, you’ve vaccinated as many people as possible, then I think people will be safe.”

Dr. Maldonado acknowledged that the Delta variant — because it is more transmissible, including by vaccinated people — presents a different risk. She said that had changed her thinking on whether vaccinated people should mask in schools (she now believes they should, which is also the C.D.C.’s recommendation) but not on whether children should return.

Yet school mask requirements have become politicized, with states like Texas and Florida banning mask mandates, and some school districts, including Dallas and Broward County, requiring them anyway. In addition to the 53 percent of districts requiring masks, 34 percent are making them optional; 8 percent are requiring only some students to wear masks (like those who are unvaccinated); and 5 percent have not communicated a mask policy.

Less than 10 percent of the 100 largest and urban districts are requiring vaccines for eligible students and staff and doing regular Covid-19 testing. (The center has not yet collected data on other types of plans, like ventilation or contact tracing.) Testing and vaccine mandates, while helpful, are not essential if there is universal masking, Dr. Maldonado said, but added that if districts are not offering them, they should require masks.

None of the schools in the sample are starting the year with part-time schedules, as many did last year in order to keep class sizes small and preserve six feet of distance between students. Since then, the recommendation has changed to three feet, which is more feasible in a full classroom. (If schools can’t maintain three feet if they open to all students, it’s even more important to add other measures like testing, the C.D.C. has said.)

Lunch, though, remains a challenge for schools; children have to take off their masks to eat. Dr. Maldonado advised keeping children three feet apart while eating and also ensuring significant airflow, with open doors and fans or by eating outside.

“That is the red flag,” she said about eating. “When I have seen people get infected in the hospital, it’s only been people who have been sitting together and eating or drinking together in the workplace.”

Understand the State of Vaccine and Mask Mandates in the U.S.