COLUMBUS, Ohio — Two days after a gunman killed nine people outside a bar in Dayton, Gov. Mike DeWine of Ohio said Tuesday that he wanted to make it easier for the police to seize guns from people deemed dangerous.

“The momentum that has been created by this horrible, horrible tragedy I think is putting a spotlight on this,” Mr. DeWine said. “Now is a window of opportunity for us to change things.”

This is not Mr. DeWine’s first attempt to push the idea of a so-called red flag law, but this time he will be under enormous pressure to pass a bill through a Legislature controlled by his fellow Republicans. When Mr. DeWine spoke at a vigil near the shooting scene on Sunday night, grieving Dayton residents drowned out the governor’s voice with shouts of “Do something!”

[What are red flag gun laws, and which states have them?]

Some states that have experienced mass shootings have been able to pass legislation tightening gun laws. In Florida, where 17 people were killed last year at a high school in Parkland, the governor signed a version of a red flag law.

Others have done nothing. In Virginia, after 12 people were killed this year at a government center in Virginia Beach, the state’s Democratic governor called a special session to consider gun bills. But Republicans adjourned in 90 minutes with no bills passed.

Still others, like Texas, where a shooting in El Paso on Saturday left 22 people dead, have had state leaders loosen their gun laws. Pro-gun laws passed in Austin this year are set to take effect in four weeks and will make it easier to bring guns into places of worship and public school grounds.

Since late 2017, Texas has been rocked by three mass shootings that have claimed nearly 60 lives; in 2016, a sniper attack killed five police officers in Dallas.

“I think every time one of these mass shootings takes place in Texas, or the rest of the country for that matter,” said James Henson, director of the Texas Politics Project at the University of Texas at Austin, “there is a tendency to think that this is the time it’s going to change, that public opinion is going to swing in a way that it’s going to affect the policy process, and we’ve just not seen that happen.”

[Read our live briefing for the latest updates on the Dayton and El Paso shootings.]

At the Statehouse in Columbus, Ohio, on Tuesday, Mr. DeWine, who was endorsed by the National Rifle Association, alluded to the challenges of toughening gun laws in Ohio, and said he had focused only on bills that he thought had a chance of clearing the Republican-led Legislature.

In addition to asking for laws making it easier to seize guns from individuals deemed dangerous by the courts, Mr. DeWine called for expanding background checks to nearly all gun purchases and toughening penalties for many gun crimes.

[The long, frustrated push for background checks on gun sales.]

It was unclear if a red flag law would have prevented the Dayton gunman from carrying out his attack.

Mr. DeWine said he was also investing in psychological services for schoolchildren and in ways for students and teachers to report potential threats. The Dayton gunman had a history of threats and other troubling behavior as a teenager.

Earlier this year, the governor came out in support of a similar red flag measure, only to encounter skepticism from gun rights supporters. A year before, Mr. DeWine’s predecessor, also a Republican, tried and failed to convince lawmakers in his own party of the need for such a law. 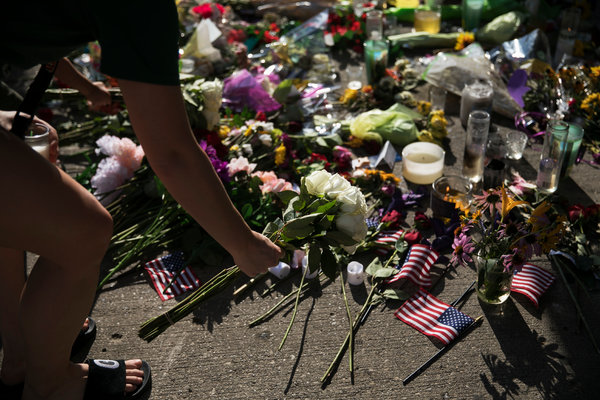 This time, said Lt. Gov. Jon Husted, a Republican, “we tried to thread the needle on everybody’s concern” after consulting with Second Amendment supporters on the measures.

Gun owner groups in the state were split on the governor’s proposals. Larry Moore, a leader of the Buckeye Firearms Association, said he was basically supportive of Mr. DeWine’s gun seizure measure.

“I don’t see us fighting this at all,” said Mr. Moore, who praised Mr. DeWine but cautioned that the “devil is always in the details.”

“They want to lay this foundation so that the next time there’s a shooting they can come back in and get the whole enchilada,” Mr. Dorr said.

Despite longstanding resistance in Texas to toughening gun laws, the El Paso shooting has prompted some urgent calls for added restrictions, including a renewed push for red flag laws.

Several state lawmakers, as well as members of the City Council in Austin, urged Gov. Greg Abbott to call a special legislative session to address the issue. But Texas political experts and state gun control advocates said there appeared to be little likelihood that lawmakers would return to Austin before their next regular session in January 2021.

A spokesman for the governor could not be reached for an immediate response.

“I think that’s what the public demands,” he said, saying “it’s high time for this state” to confront gun violence head-on after the mass slayings of dozens of people within the past two years.

Mr. Rodríguez has been a leading advocate for enacting “common-sense gun reform” in Texas, including a red flag law and increased penalties for violating state gun storage laws. But he concedes that, even after the horrific violence in his hometown, he and other supporters of those measures face a steep challenge.

A proposed red flag law seemed to gain traction after 10 people were killed at Santa Fe High School in May 2018, but it went nowhere in this year’s legislative session.

Mr. Abbott, who convened a three-day school safety summit in the aftermath of that shooting, initially asked lawmakers to consider the proposal but declined to get behind it after Lt. Gov. Dan Patrick, the Senate’s presiding officer, vowed that it would be dead on arrival in his chamber.

But for those who support gun control, the attention that another shooting brings can create an opening.

“I wonder if every mayor that has a shooting like this hopes their city is the one that makes action happen,” Mayor Nan Whaley of Dayton said.