ALBANY — Michigan shut down indoor dining and in-person classes at high schools and colleges. Washington banned indoor gatherings with anyone outside your household without a weeklong quarantine. And officials in Oregon closed offices to the public and are limiting the number of people in grocery stores.

As record numbers of virus cases emerge across the United States, major cities and states are implementing tough new restrictions. But in New York State, once the epicenter of the pandemic, the response to a second wave has been far more measured, with officials banking on a variety of less disruptive, targeted actions, often reliant on voluntary compliance.

Ominous signs are everywhere: In New York City, Mayor Bill de Blasio closed in-person classes at the city’s schools starting Thursday when the seven-day positivity rate rose above 3 percent on Wednesday. Thousands of new cases are emerging every day statewide, and hospitalizations have more than quintupled since early September, topping 2,200 on Wednesday. Deaths have also been trending upward, with the state reporting nearly 200 deaths in the last week, and 35 just on Wednesday, the highest one-day total since mid-June.

The numbers are also spiking in some areas that were spared the worst in the spring: Western New York has seen about 3,700 new cases in the last week alone, with rates of positive test results running above 5 percent. 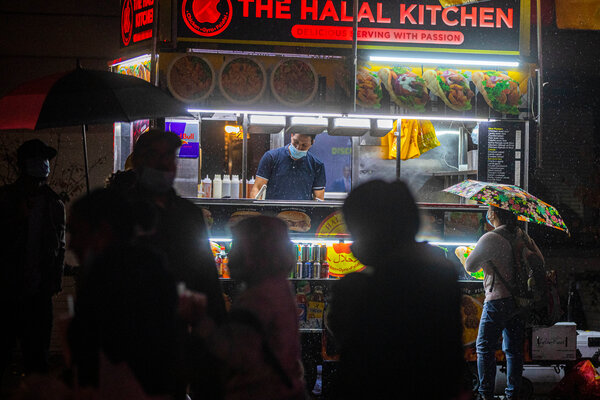 All told, 12 counties around the state are seeing significant outbreaks, from Brooklyn to Buffalo.

Gov. Andrew M. Cuomo says his response to the pandemic continues to be aggressive and highlights his state’s achievements: New York is still seeing much lower rates of infection than most states. And the number of daily deaths and hospitalizations pales in comparison to the spring, when thousands died for several weeks running, and tens of thousands were sickened.

Still, some public health experts and officials worry that without a broader shutdown, the state might not be able to limit the virus’s spread, particularly as residents tire of restrictions and the holidays near.

“The odds are against us at this stage in terms of keeping it under control,” said Dr. Isaac Weisfuse, a former New York City deputy health commissioner.

On Wednesday, during an unusually combative news conference with reporters in Albany, Mr. Cuomo displayed a slide that ranked New York among the states with the lowest positivity rates in the country.

“The whole world is going up,” Mr. Cuomo said, adding, “Every state is the nation is going up, right? So success becomes what? How you’re doing relative to everybody else.”

But when asked if the rising rates meant his current targeted approach was falling short, Mr. Cuomo took offense and, raising his voice, chided the reporter: “New Yorkers are doing a great job, and don’t demean them.”

The defensive posture from Mr. Cuomo, a third-term Democrat, is striking considering the confident air he’s projected since the early days of the pandemic.

For three months, the governor held daily news conferences, providing hard data and reassurance to the country, even as thousands died in New York. He closed schools and nonessential businesses, required masks and social distancing and ramped up testing and contact tracing.

The measures made New York’s approach a model for flattening the curve, but it also had a devastating effect on the economy: More than one million New Yorkers lost their jobs, and the city and state were saddled with multibillion-dollar budget deficits.

Now, as the virus has shown clear signs of a resurgence, Mayor de Blasio has closed school buildings and voiced concern about indoor dining, which resumed in limited fashion in the city at the end of September. But Mr. Cuomo, who has ultimate authority over closing restaurants and schools statewide, has not pushed for either.

On Wednesday, however, Mr. Cuomo disclosed that New York City could see new citywide restrictions, including the closure of hair salons, gyms and indoor dining, if the city’s seven-day average positivity rate surpassed 3 percent under the state’s metrics. The rate hovered at 2.5 percent on Wednesday. Such a move would be a significant step backward for state and city residents.

The governor, so far, is hoping to stanch the spread of the disease with a series of less disruptive gradated restrictions, including a 10 p.m. curfew for bars, restaurants and gyms statewide.

Mr. Cuomo also announced a ban on gatherings of more than 10 people in private residences, a rule that drew some angry rebuttals and could be difficult for families to comply with during Thanksgiving, Hanukkah and Christmas. Some upstate sheriffs have said they will not enforce the rule.

Mr. Cuomo addressed the challenges on Wednesday, saying, “Nobody’s saying ‘Knock on doors, count heads,’” while adding that authorities should enforce the rules, regardless of their political beliefs. “If you see it,” he said, “stop it.”

Some experts criticized the governor for not shutting the state down faster in March. And considering the toll of the virus in New York, his decisions this fall will again be under a microscope.

Dr. Thomas R. Frieden, the former head of the Centers for Disease Control and Prevention and former commissioner of the city’s Health Department, said that such “granular” approaches to shutdowns were valuable “as long as you don’t have widespread transmission.”

Dr. Frieden noted that California, which also resumed restrictions in many areas, made changes on a county level, not dissimilar to New York’s approach. “You want to balance any disruption that you cause by closures with being relatively nuanced,” he said, adding that “the reality is that the sooner you close, the softer you have to close.”

Mr. Cuomo has written a book on the state’s recovery and did a round of publicity interviews last month. But as virus cases rose again, the governor often seemed content to allow his profile to recede: Instead of daily televised news briefings, Mr. Cuomo now favors a less frequent batch of dial-in phone conferences. On some days, state statistics are merely issued by news release.

The governor’s strategy has largely been to focus on small areas he calls “microclusters,” attacking outbreaks through targeted actions. In those areas, Mr. Cuomo has been willing to close schools, as well as restaurants and other nonessential businesses, and limit attendance at houses of worship, mass gatherings and restaurants.

Mr. Cuomo says his localized approach has been successful with tamping down outbreaks, particularly in certain Jewish Orthodox communities in Brooklyn and the city’s northern suburbs, as well as in Broome County, on the border with Pennsylvania. But the number of clusters has continued to grow: On Wednesday, he announced new precautionary zones in parts of the Bronx, Queens, and Western New York, and more stringent restrictions in Erie County.

The holiday season is also worrying. State and local officials attribute part of the current spike to a “Halloween hangover,” resulting from parties and gatherings that people attended at the end of October. Public health experts and state officials say things may worsen after the flurry of travel expected during the next six weeks, including college students returning to New York from places with higher infection rates. On Wednesday, Mr. Cuomo himself predicted a “tremendous spike after Thanksgiving.”

Dr. Weisfuse said that there were a “confluence of problems coming up” that Mr. Cuomo’s actions might not be able to address.

“The rules are good, although they may be more symbolic than anything else,” he said, adding, “It feels like they’re struggling to come up with applicable solutions, and it’s going to be harder and harder.”

While the state has issued hundreds of citations for bars and restaurants disobeying occupancy and mask rules, more recent dictums from Mr. Cuomo have been largely contingent on a honor system.

Chief among those is his Oct. 31 executive order that called for visitors from noncontiguous states to quarantine for three days and then submit a negative test to state authorities. The order includes a $10,000 penalty for noncompliance, but state officials haven’t said how many citations have been ordered since it took effect two weeks ago.

State officials argue that the governor’s more limited restrictions are meant to both encourage residents to re-engage and comply with safety measures and curb problematic behavior, with the implicit warning that harsher restrictions will come if rules aren’t followed.

At the same time, they recognize people were weary of Covid-related restrictions. “We see the fatigue,” said Gareth Rhodes, a member of New York State’s Covid-19 Task Force.

Already, local leaders across the state say residents across are defying rules for weddings, sports and religious events and parties.

Dan McCoy, the county executive in Albany, the state capital, estimated that about 60 percent of people who are contacted by health officials for contact tracing either lie or omit facts. Part of that, he says, is stigma — “People say, ‘I don’t want my neighbors knowing I have it,” he said — as well as concern about missing work or important family occasions to quarantine.

At the same time, Mr. McCoy and other county executives are terrified that if the virus continues to spread, it could force Mr. Cuomo’s hand to reinstate his March 22 “On Pause” order.

“We can’t do another shutdown,” said Mr. McCoy, citing worries about issues like domestic violence, child neglect and substance abuse. “But we can’t do our job if people aren’t cooperating with us.”

Mr. Cuomo has been warning about a possible resurgence of the virus for months and has pressed local officials to enforce virus-related restrictions.

But many county officials say they are dealing with their own mounting problems, including understaffing and early retirements, lack of resources and residents who are increasingly reluctant to abide restrictions.

“A lot of these things we know how to do, but the scale of it is absolutely unsustainable,” said Jason T. Garnar, the county executive in Broome County, where a hot spot emerged last month. “A lot of my employees are getting burned out.”

Some public health experts agree that the “case-based interventions” that Mr. Cuomo is recommending are preferable to broader shutdowns, citing ancillary damage to the economy, public morale and education, as well as surges in social ills.

“We know they work, but they work like a sledgehammer,” said Dr. Jennifer Nuzzo, a senior scholar at the Johns Hopkins Center for Health Security.

Still, the recent surge has given urgency to calls to not repeat the mistakes of last spring.

“I don’t think we need a full lockdown; on the other hand, I do think we need action,” said Dr. Wafaa El-Sadr, a professor of epidemiology and medicine at Columbia University, noting that political leaders had been suggesting for weeks that they are considering new restrictions. “I always say if you think you need to do something, it probably means you need to do it.”