SÃO PAULO, Brazil — For weeks, President Jair Bolsonaro’s supporters have made their presence felt with the roar of motorcycles during boisterous rallies meant to show steadfast fealty to an increasingly unpopular leader.

Until recently, the president’s opponents had refrained from convening street protests, opting instead to show their exasperation by banging pots and pans from windows and trading memes online.

But over the weekend, thousands of Brazilians critical of Mr. Bolsonaro took to the streets in the largest public mobilization against the president since the beginning of the pandemic.

Their show of force in cities across the country followed a series of damning revelations in congressional hearings examining the government’s catastrophic response to the coronavirus, which has killed more than 461,000 Brazilians.

Mariana Filgueiras, a professor at the school of communication at the Federal University of Rio de Janeiro, said she decided to participate in anti-government protests to help put a face on the rising opposition. A recent public opinion poll, by Datafolha, found that Mr. Bolsonaro’s support slipped to 24 percent in May from 30 percent in March.

“We need to show that for every thousand people on motorcycles who are in favor of the government, there are thousands of people walking peacefully in the streets against it,” Ms. Filgueiras said. “The government is more dangerous than the virus.”

The recent street demonstrations, which have been largely orderly, are a far cry from the huge protests that shook Brazil in 2013 and 2015, fueling the successful effort to impeach President Dilma Rousseff in 2016.

But political analysts said they could signal a new phase of political instability as a deeply polarized electorate starts gearing up for next year’s presidential election.

“These demonstrations, given the number of people and their turnout throughout the nation, have put impeachment back on the horizon,” said Pablo Ortellado, a public policy professor at the University of São Paulo. “It doesn’t mean an impeachment will happen, but the possibility has gained traction.”

Mr. Ortellado said the president’s hard-core supporters have been more visible on the streets than his detractors because, like Mr. Bolsonaro, many have dismissed the threat of the virus. That means they attend crowded gatherings of people who do not wear masks. 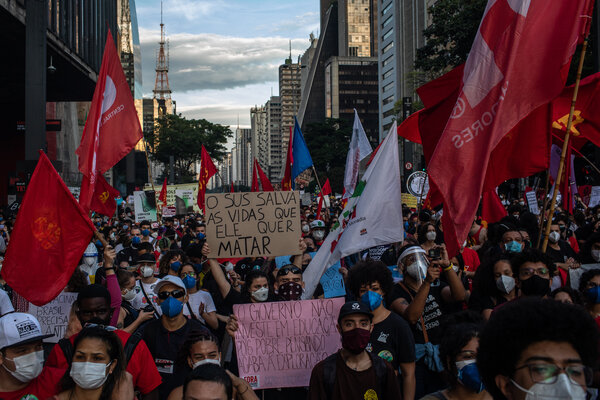 Anger over Mr. Bolsonaro’s handling of the pandemic has grown in recent days as witnesses outlined a long series of missteps in testimony before a legislative committee. Former health ministers spoke about the president’s befuddling belief that an anti-malaria drug was effective to treat Covid-19, the disease caused by the virus, even after scientists concluded definitively that it was not.

An executive at Pfizer testified that the American pharmaceutical company offered Brazil millions of doses of its Covid-19 vaccine last year, but received no response from the government for months.

Mr. Bolsonaro has shrugged off the revelations and shown no contrition. On Monday, his government announced that Brazil would host the Copa America soccer tournament later this year, after Argentina decided it would be irresponsible to do so on its soil while the virus continues to spread.

At recent rallies supporting the president, Mr. Bolsonaro has been lionized as a “myth.” A recent banner that greeted motorcycle enthusiasts in Rio de Janeiro proclaimed: “Myth, you are not alone.”

Paulo Cid Engineer, 55, who participated in one of those recent motorcycle rallies, said he regarded Mr. Bolsonaro as a fundamentally honest leader who has been unfairly attacked by scientific institutions and by the news media.

“I confess that my indignation turned into emotion,” he said, recalling how he felt at a pro-government rally earlier this month in Rio de Janeiro. “I will be able to tell my children and grandchildren that I took my part in a movement seeking a better country.”

The government has also been shaken by scandals unrelated to the pandemic.

The Estadão newspaper revealed in early May that Mr. Bolsonaro’s administration had steered hundreds of millions of dollars to questionable initiatives and purchases that strengthened the hand of key allied lawmakers. One case involved the government’s purchase of tractors at a 259 percent markup.

Days after the Estadão report, federal police served search warrants at the ministry of the environment as part of an investigation into a suspected scheme to authorize illegal exports of timber from the Amazon.

Amid the drumbeat of bad news, Mr. Bolsonaro has kept a busy travel schedule, focusing on electorally important states in northeast Brazil, where he has highlighted investments in infrastructure and basic services.

“When Bolsonaro goes to the streets, he needs thousands of police officers to protect him,” Mr. da Silva wrote on Twitter on Saturday. “Does he think I’m afraid of him? I was born on the streets and spent my whole political life on the streets.”