President Trump called the city a “ghost town,” and he has often depicted it as a lawless zone, apparently in an effort to appeal to his base. 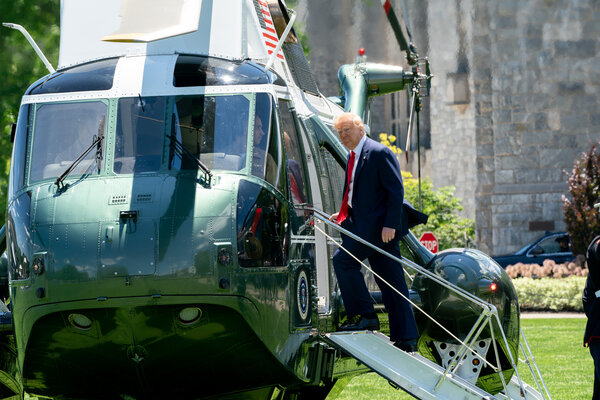 In the final weeks of the presidential race, President Trump cannot seem to stop harping on New York City.

He wrote on Twitter that his hometown had “gone to hell.” He said on Fox News this week that the city was in such despair that he might win the state in November — despite polls showing that he is far behind. And in both debates against Joseph R. Biden Jr., Mr. Trump referred to New York as a ghost town.

“Look at what’s happened to New York, it’s a ghost town. It’s a ghost town,” he said at the debate on Thursday night. “For so many years I loved it, it was vibrant. It’s dying, everyone is leaving New York.”

Mr. Trump’s antagonistic stance lies in stark contrast to Mr. Biden, the former vice president who has made his home state of Delaware a central part of his narrative, referring to it several times during Thursday’s debate. But for the president, belittling New York seems to serve two purposes: It appeals to his base as a campaign strategy, and allows him to address personal scores with his foes.

While many New Yorkers feel that Mr. Trump has turned his back on the city, the feeling is mutual with Mr. Trump. The city overwhelmingly voted for Hillary Clinton in 2016. There were protests when he returned to Trump Tower. His name was stripped from skyscrapers.

Democratic prosecutors in New York are digging into his family’s finances, and Democratic leaders, like Gov. Andrew M. Cuomo and Mayor Bill de Blasio, frequently accuse him of betraying his hometown. Mr. Cuomo recently accused the president of “actively trying to kill New York City ever since he was elected.” 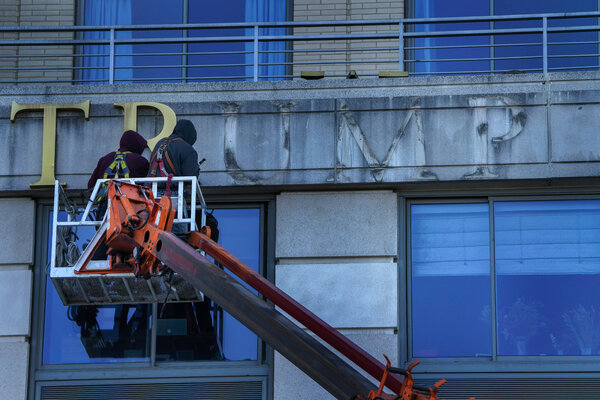 Representative Peter T. King, who is close with Mr. Trump, says the city serves as a useful foil for the president for “what happens when liberals take over.”

“If he wants to have a punching bag that plays with the rest of the country, New York City is the perfect target,” he said. “You see the boarded-up buildings, you see the dramatic increases in crime, you see people leaving for the Hamptons.”

Mr. Trump, however, has not seen much of the city’s problems firsthand: The only visit he made to the city this year was to see his ailing brother before his death in August.

Despite his absence, his aides said that Mr. Trump was still proud of being from New York, even noting that the president interrupted Mr. Biden during Thursday’s debate to say that he was born in Queens.

“President Trump loves New York City and, as you heard last night, is proud to be from Queens,” Judd Deere, a White House spokesman, said in a statement that also included many of Mr. Trump’s grievances, including “draconian shutdowns” and high taxes.

“This is a failure of state and local leadership, and this president is not going to let what is happening to New York and many other places happen to the rest of the country,” he added.

Indeed, the president last month labeled the city an “anarchist jurisdiction” and threatened to slash its funding.

The president is now balking at granting New York more coronavirus recovery funds, despite entreaties from Mr. King to reconsider. But the constant taunting from Mr. Cuomo and Mr. de Blasio — including painting “Black Lives Matter” on the street in front of Trump Tower — does not help, Mr. King said. They could play nice, he suggested, or “at least tone it down.”

At this juncture, playing nice would likely have little effect: Mr. Trump seems to regard his hometown with such acrimony that his decision to officially move his residency to Florida last year served as a de facto finalization of divorce papers.

“He’s throwing New York under the bus because he think it’s going to help him get re-elected,” said Mr. Scaramucci, who broke with Mr. Trump and endorsed Mr. Biden.

“He’s determined that those people are in battleground states and disaffected areas of the country that have a disdain for East Coasters, elitists and Wall Street,” Mr. Scaramucci said.

That strategy should ring familiar to Mr. Trump: Four years ago, Senator Ted Cruz of Texas attacked “New York values” at a Republican presidential debate. Mr. Trump bristled at Mr. Cruz’s taunts then, saying the city was a “great place” with “wonderful people.”

But Mr. Trump’s tone began to change not long after the election, which saw New York City voters side with Ms. Clinton four to one.

While Mr. Trump says he wants to be competitive in New York State, he could fare worse in this election than he did against Ms. Clinton. Mr. Trump won about 36.5 percent of votes in the state in 2016 and is polling at less than 30 percent against Mr. Biden.

His standing in New York fell during the height of the pandemic and in the aftermath of Black Lives Matter protests, when he said that his “administration will not allow federal tax dollars to fund cities that allow themselves to deteriorate into lawless zones,” singling out New York and two other cities.

The “anarchist” designation could have a real impact on transit funding and other federal resources, though New York City officials on Thursday filed a lawsuit contesting the potential funding cuts.

The two investigations in New York have also clearly rankled Mr. Trump. The Manhattan district attorney’s office is seeking his tax returns as part of an investigation into the president and his business practices, focused on potential crimes that include tax and insurance fraud and falsification of business records.

New York’s attorney general, Letitia James, is looking into whether the Trump family’s real estate company committed fraud, and Mr. Trump’s son Eric was compelled this month to give a deposition in the matter.

Mr. Trump has frequently criticized the prosecutions as politically motivated and unfounded, contending on Twitter that the investigations were products of a “politically corrupt New York.”

Given the acrimony, Mr. Trump’s visits to New York have dwindled. He made a few trips to the city last year, for the United Nations General Assembly, fund-raising events and an Ultimate Fighting Championship event at Madison Square Garden.

The president received a mixture of boos and cheers at the Garden, but Representative Peter King, who was with Mr. Trump, said the president “was in his glory.”

“The next morning at the hotel,” Mr. King said, “cops and firefighters were taking pictures with him.”

But when the city’s largest police union endorsed Mr. Trump this summer, the rally was not held in New York. It was staged nearly 40 miles away at his country club in Bedminster, N.J.

Mr. Trump visited the Hamptons in August for fund-raisers and came to Manhattan later that month to visit his younger brother, Robert Trump, in the hospital. The president’s only other trip to the state this year was in June to give the commencement address at West Point, about an hour’s drive north of the city.

Mr. Trump has also traveled to Florida and Puerto Rico after devastating hurricanes, and in May, the president said that he would visit New York City, where more than 20,000 people have died from the coronavirus, “when things calm down.” He has not done so.

Jesse Garcia, a county Republican leader on Long Island, said Mr. Trump had shown his love for the city by providing relief funds through the $2 trillion CARES Act in March and sending the Navy hospital ship U.S.N.S. Comfort to the city, along with the Army Corps of Engineers.

“I believe where he has some angst is with the ultraleft progressive socialist Democrats that have let this wonderful city rot from the inside,” Mr. Garcia said.

The president’s comments about New York’s decline could also help Republicans in local suburban House races on Long Island, Mr. King said, including ones involving Representative Lee Zeldin and Andrew Garbarino, a state assemblyman seeking to succeed Mr. King, who is not running for re-election.

After so many slights, Mr. Cuomo said Mr. Trump would need heavy protection if he tried to return.

“Forget bodyguards,” the governor told reporters last month. “He better have an army if he’s going to walk down the street in New York.”

Edward F. Cox, the former head of the New York State Republican Party who is working on Mr. Trump’s presidential campaign, said the president would have no qualms about returning, despite Mr. Cuomo’s threats.

“He can come here anytime,” Mr. Cox said. “He doesn’t need an army. There would be a few protesters, but he’d be just fine.”