It happened in a flash.

A deputy drew what he thought was his stun gun on a Black man who was fleeing, announcing his choice of weapon with a shout of “Taser!” But it was a pistol he pulled out, not a stun gun, and the man died. “Oh, I shot him,” the deputy says on video. “I’m sorry.”

Though the facts sound eerily familiar, that was six years ago in Tulsa, Okla., in a case that closely echoed what occurred this weekend in Brooklyn Center, Minn. There was the same announcement, the same tragic result, the same shocked response.

But what made the Tulsa case unusual happened in its aftermath: The deputy, Robert C. Bates, a reserve volunteer with the Tulsa County Sheriff’s Office, was charged by prosecutors, convicted at a trial and sent to prison.

The similarities between the 2015 case in Tulsa and the shooting death of a 20-year-old Black man, Daunte Wright, in Minnesota on Sunday are striking. Six years later, amid a fraught national conversation around race and policing, Mr. Wright’s death has once again provoked intense interest in how the legal system should treat such deadly use of force.

While it is rare for the police to mistake their sidearms for their stun guns, it is even rarer for charges to be brought against them in such cases. A New York Times review of 15 cases of so-called weapon confusion over the past 20 years showed that only five of the officers were indicted. Only three, including the only two cases in which people were killed, were eventually found guilty.

“When you’re talking about cases where the excuse is it’s an accident, they’re just not easy to prove,” said Geoffrey P. Alpert, a criminologist at the University of South Carolina who studies the use of force. 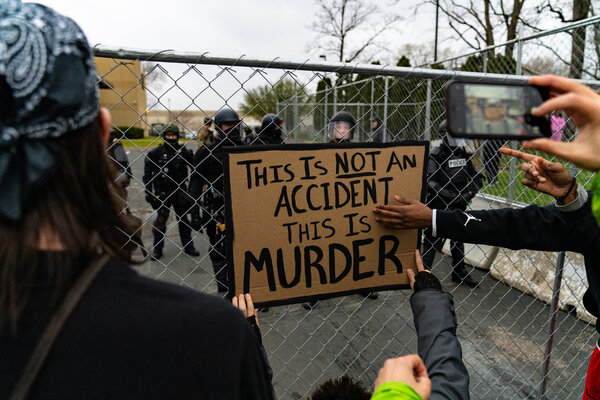 The case in Minnesota, which on Tuesday led to the resignation of the department’s chief and the officer who shot Mr. Wright, Kim Potter, has focused the nation yet again on the killing of an unarmed Black man by the police. The case is playing out only 10 miles from the courtroom where the trial of Derek Chauvin, the Minneapolis police officer accused of murdering George Floyd last May, is being held.

Captured on body camera video, Ms. Potter’s actions are an almost identical replay of what happened in Tulsa in 2015. While another officer struggles with Mr. Wright as he sits in the driver’s seat of his car, Officer Potter aims her weapon, the video shows, shouting, “Taser! Taser! Taser!” After she fires one round, Mr. Wright groans in pain as Officer Potter cries, “Holy shit, I just shot him.”

It remains unclear what, if any, legal repercussions Ms. Potter may face. But Kevin Gray, the lead prosecutor in Mr. Bates’s case, said the Tulsa district attorney’s office brought charges only after determining that Mr. Bates had not acted “like a normally prudent person should have” by reaching for his pistol when he meant to draw his Taser.

Mr. Gray said that prosecutors did not accuse Mr. Bates of murder in the shooting death of the man he killed, Eric Harris; they accused him of second-degree manslaughter. To prove that accusation, prosecutors had to show only that Mr. Bates acted with “culpable negligence.”

“The case was premised on the idea that an ordinary person, exercising caution and care, should have known what weapon they had in their hand,” Mr. Gray recalled. “We charged what we saw and what the evidence supported, not what might have been popular.”

In the 15 cases reviewed by The Times, the two incidents in which people were killed resulted in manslaughter convictions by juries; a third officer pleaded guilty to a lesser charge in a case in which someone was injured. Two other cases are pending.

In 2014, Officer Jason Shuck shot a man who ran away from the police when they approached him as he was panhandling outside a Walmart in Springfield, Mo. Officer Shuck later told an investigator his “brain was saying Taser” but his “body moved faster” and he drew his pistol.

Local prosecutors allowed the officer to plead guilty to a misdemeanor assault charge. As part of the plea deal, Mr. Shuck, who quit the police department, agreed to never work again in a job that required him to carry a firearm.

The authorities in Minnesota have not yet said if charges might be pending. In two of the three cases in which people were fatally shot, the officers eventually faced charges.

Because the law grants the police enormous leeway to protect their own lives and those of others in situations they deem to be dangerous, it remains difficult to charge and convict them even in cases when they do not claim a shooting was accidental. It can be at least as difficult to bring charges when officers argue they merely made a mistake.

In 2017, for instance, Charles Gillis, a small-town Georgia sheriff’s deputy, claimed that he had accidentally drawn his gun instead of his Taser and fired a bullet through the arm of a young man he and his partner were trying to arrest. After considering the case, the local district attorney said he found no negligence or criminal intent.

Robert Weisberg, a professor of criminal law at Stanford University, said that typically, officers could be culpable if their actions meet the standard of gross negligence.

“Was it extremely reckless or negligent for a trained officer to make this mistake?” he said.

Officers may evade charges or convictions if the context around their actions — whether the victim made sudden or threatening movements, for example — makes those actions seem reasonable.

Mr. Weisberg said that cases in which officers say they mistook which weapon they were using are rare. He said they are legally different from the majority of police shootings, where officers concede they used deadly force but argue they were justified in doing so.

“We haven’t seen any evidence that the officer intended to cause Mr. Wright’s death,” he said.

In 2019, Matthew D. Weintraub, the district attorney in Bucks County, Penn., investigated a case of weapon confusion involving an officer who yelled, “Taser!” before shooting a man in a police holding cell. Mr. Weintraub ultimately ruled out charges after finding that the shooting was “neither justified, nor criminal” and that the officer had an “honest but mistaken” belief that he had used his Taser against the victim, who was injured but survived.

But when a transit officer fatally shot Oscar Grant III in Oakland, Calif., in 2009, prompting protests nationwide, prosecutors charged the officer, Johannes Mehserle, with second-degree murder. They reviewed surveillance video that showed him pulling out a firearm and shooting Mr. Grant, who was lying face down on a train platform.

“What we had was ‘A shoots B,’ that’s all we know, it’s second-degree murder,” Tom Orloff, who was Alameda County district attorney when Mr. Mehserle was charged, said in an interview.

Mr. Mehserle would later argue in court that he meant to use a stun gun, a contention prosecutors challenged.

Mike Rains, a lawyer in California who represents law enforcement in criminal and civil cases, including Mr. Mehserle, said officers mistake firearms for stun guns because they are on “autopilot,” and the officers should not be held criminally culpable.

He said many officers in such cases have been trained to draw the stun gun with the same hand as their firearm. He said they typically have fired only one shot with the firearm, indicating a mistake — if they intended to use the firearm, he said, they would likely have fired multiple shots.

“They aren’t thinking, they are reacting,” he said.

Several of the victims and their families in weapon confusion cases filed civil lawsuits against the officers who shot them after charges were denied. Courts have long set a high bar for permitting suits against officers in situations where they were performing their official duties under the theory known as qualified immunity. But courts have appeared more generous in cases of mistaken shootings, often setting immunity aside and allowing suits to move forward.

In 2005, for instance, a Minnesota federal court permitted a suit against Officer Gregory Siem, who was accused of drawing his Glock, not his Taser, and shooting Christofar Atak, a man his partner was trying to handcuff. In a decision denying qualified immunity, the judge ruled there were too many differences between the weapons for Officer Siem’s actions to have in fact been accidental.

The Glock was not only heavier than the Taser, the judge decided; it also had “a noticeably different feel when held.” The pistol, he noted, had a trigger safety, but the Taser had no “security mechanism.” Finally, the Glock had a conventional trigger, the Taser a rubber button.