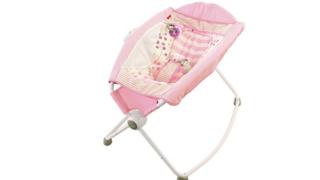 Toymaker Fisher-Price has recalled nearly five million of its Rock ‘n Play Sleepers after reports linked the product to dozens of baby deaths.

The recall was announced by the US Consumer Product Safety Commission (CPSC) on Friday.

On its website, the commission said at least 30 infants had died in the sleeper model since its 2009 release.

In a statement, Fisher-Price owner Mattel confirmed the voluntarily recall but stood by the product’s safety.

They said the infants had rolled over while unrestrained or in other circumstances.

“While we continue to stand by the safety of all of our products, given the reported incidents in which the product was used contrary to safety warnings and instructions, we’ve decided in partnership with the Consumer Product Safety Commission (CPSC), that this voluntary recall is the best course of action,” the company said.

The CPSC has estimated the recall affects about 4.7m products.

It has urged consumers to stop using the sleepers immediately and contact Fisher-Price for a refund.

“When parents purchase a product for their baby or child, many assume that if it’s being sold in a store, it must be safe to use. Tragically, that is not the case,” President of the AAP, Kyle Yasuda, said in a statement.

The AAP cited a report by US magazine website Consumer Reports, which linked the product to 32 separate infant deaths.