The horde of politicians running for mayor of New York City appears to have finally hit a saturation point.

More than 30 people are still in the field, making it difficult for a clear front-runner to emerge — and near impossible for a second- or third-tier candidate to break through.

With four months before the June 22 primary, one long-rumored candidate has decided not to join the scrum. But not to worry: There are still plenty of opinions to go around on everything from police funding to bagels. 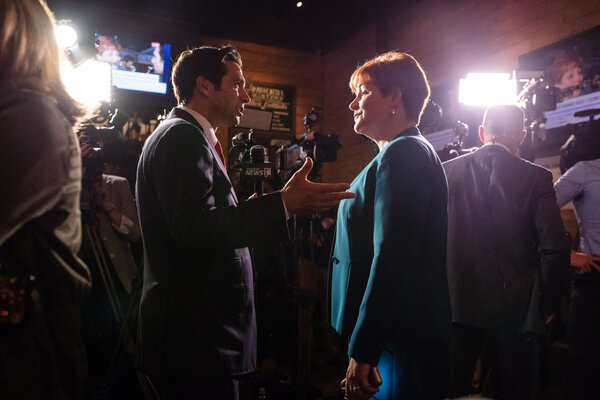 Christine Quinn will not enter the race

Christine C. Quinn, a former City Council speaker who had been a favorite in the 2013 Democratic mayoral primary, is doing the nearly unthinkable: She is resisting the urge to run for mayor — or any elective office this year.

“I’ve been thinking about it a while and it wasn’t an easy decision,” said Ms. Quinn, whose bid in 2013 was partially derailed by an anti-horse carriage super PAC, paving the way for Bill de Blasio to capture the Democratic primary and the mayoralty.

Since then, Ms. Quinn has run a homeless services organization for families with children. Had she run for mayor, she would have made the issue central to her campaign.

“Jesus in the Bible said the poor will always be amongst us, but this crisis we’re in now — more homeless children in shelter than there are seats in Madison Square Garden — that’s solvable,” she said. “It’s just no one has demonstrated the political will.”

Ms. Quinn’s deliberations lasted months — she had been interviewing potential staff and commissioned a poll, according to a friend who was not authorized to speak publicly. But in the end, she recognized that a homelessness-centered platform would be unlikely to carry the day in a city consumed by the pandemic, the friend said.

Even so, Ms. Quinn does not mean to fade into the background.

“I really believe that I can effect more change by staying on the outside and being a thorn in the side of everyone who is running,” she said.

Have you gotten the vaccine? Scott Stringer has.

With limited doses of the vaccine available, some elected officials have made it a point to take the vaccine in a public way to show it is safe. Others want to wait to show the system is fair.

Mr. de Blasio, 59, decided not to take the vaccine yet. His wife, Chirlane McCray, 66, got it this month because she meets the state’s age requirements for people 65 and older.

Scott M. Stringer, 60, lost his mother to the coronavirus in April and wanted to get the vaccine as soon as possible. On Friday, Mr. Stringer, the city comptroller, became the first leading mayoral candidate to receive the vaccine, getting it at the Aqueduct Racetrack in Queens.

Mr. Stringer, 60, has hypertension, or high blood pressure — one of the conditions that make New Yorkers eligible for the vaccine under new rules.

“I always said I would get the vaccine when I was qualified,” he said in an interview. “It was not a tough decision for me.”

Many New Yorkers have struggled to get a vaccine appointment. Mr. Stringer used the state’s website and did “a lot of refreshing with a friend” early one morning.

Several candidates said they had not received the vaccine and were waiting until more New Yorkers had the shot. Eric Adams, the Brooklyn borough president, said he was checking with his doctor to see if he qualifies under new guidelines.

Under normal circumstances, the path to New York political power is paved with dining pitfalls. There is the scrutiny of how officials consume a slice of pizza, the pressure to eat — and eat and eat — across the city’s diverse neighborhoods.

And then there is a divisive category all its own: bagel preferences.

After The Forward published a survey revealing the choices of eight of the candidates (four preferred everything bagels with lox), a TikTok video from the account brooklynbagelblog ranked the candidates.

Bagel preferences arose again on Thursday at a mayoral forum hosted by the New York Jewish Agenda, when candidates were asked about their order at a New York Jewish deli, an institution where rye bread, not a bagel, is often the starch of choice.

Still, Raymond J. McGuire, Dianne Morales, Andrew Yang and Loree Sutton opted to share their bagel preferences. Mr. Stringer, who is Jewish and who has a political power base on the West Side — home to several legendary appetizing stores — said he would opt for matzo ball soup and pastrami on rye.

Most of the leading candidates have said they don’t want Mr. de Blasio’s endorsement, but that hasn’t stopped him from weighing in on the qualities he’d like to see in his successor.

At a meeting at Gracie Mansion with union leaders that was reported by Politico New York, the mayor expressed a fondness for the life story of Mr. Adams and questioned the lead that Mr. Yang, the former presidential candidate, has registered in initial polls.

At a news conference last week, Mr. de Blasio confirmed the meeting, explaining that the participants were not talking about “one candidate or another,” but “the working people of New York City and the future of New York City.”

“We know what it’s like when the elites get it their way and working people are an afterthought,” the mayor said. “So, the meeting was really about where are we going.”

The mayor hasn’t decided whether to offer an endorsement, adding that it was too early for prognostication.

“If you go back to the equivalent time in 2013, I was in either fourth or fifth place before the primary,” Mr. de Blasio said of his surprise victory.

The response from the candidates varied. Mr. Adams “appreciates that the mayor recognizes his powerful life’s journey,” said Evan Thies, a spokesman.

The campaigns of Mr. Yang and Mr. McGuire responded to Mr. de Blasio’s comments with what seemed like sharp jabs.

“Andrew Yang is focused on tangible ways to help New York City bring back jobs, reduce the outbreak in shootings, and recover from the most difficult period in its history,” said Chris Coffey, a spokesman for Mr. Yang.

Mr. McGuire said the mayor’s comments were “divisive, old-school political posturing that’s making our city’s comeback harder than it should be.”

“Can’t we just, for once, bring people together to solve problems, instead of seeking out ways to divide us all into narrow buckets of power?” Mr. McGuire said.

In 2019, the de Blasio administration released a report — delayed for years for politically motivated reasons, according to city investigators — that found that the vast majority of yeshivas visited by city officials were not meeting state standards on secular education.

The report gave momentum to critics of yeshiva education, many of them Jews, who argue that the lack of quality education in subjects like English deprives students of the ability to thrive in the job market after graduation, and have asked city and state education officials to intercede.

Some mayoral candidates have said they would take steps to ensure every New York City child received a sound secular education, in accordance with state law.

Mr. Yang, however, said he is waiting for more data.

“I do not think we should be prescribing a curriculum, unless the curriculum can be demonstrated to have improved impact on people’s career trajectories and prospects afterward,” Mr. Yang said at the mayoral forum on Thursday hosted by the New York Jewish Agenda.

Then he pivoted to a discussion about his own experience in high school, during which he spent a month reading the Bible as literature.

“If it was good enough for my public school, I do not see why we somehow are prioritizing secular over faith-based learning,” Mr. Yang said.

His response startled many education leaders in New York, including Randi Weingarten, the president of the American Federation of Teachers, who moderated the forum. She is Jewish and married to a rabbi.

“Andrew Yang is better than this,” Ms. Weingarten said in an interview.

“Regardless of who the child is,” she added, “they have a right to dream their dreams and achieve them and that means they have to have in New York State a sound basic education.”

Naftuli Moster, the executive director of Yaffed, which advocates for stricter enforcement of state education standards, was sharper in his criticism.

“I don’t know if he understands the magnitude of educational neglect happening in the city he hopes to represent and he’s still choosing to pander to Haredi leaders, or he simply hasn’t done his homework,” he said.

In a subsequent email, Mr. Yang’s spokesman said the candidate was familiar with the 2019 city report finding inadequate secular education in dozens of yeshivas and would “work constructively with the community to improve outcomes in those schools.”

But, the spokesman said, Mr. Yang is awaiting “fresh data regarding the roughly 90 percent of yeshivas that were left out” of the report.