But this year, New York’s parks began bustling with barbecues, birthdays and boozy picnics well before Memorial Day Weekend, the unofficial start of summer in the city.

As Covid-19 cases decline and vaccination rates rise, New Yorkers have been eager to return to public spaces and relearn life’s rituals.

Over several weeks in May, we visited parks around the city to see what this summer has in store for us. Here’s whom we met: 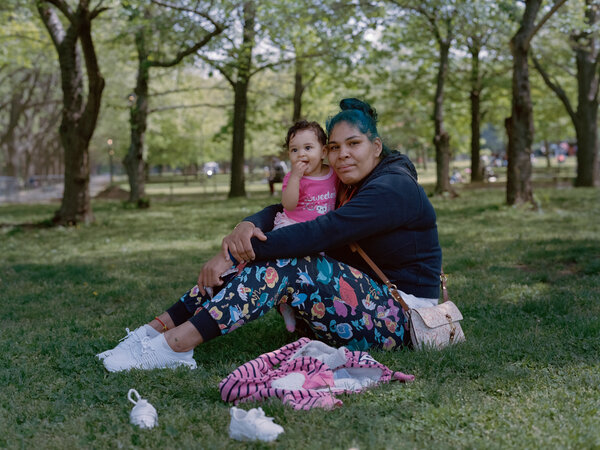 On Mother’s Day, families flocked to Flushing Meadows Corona Park, which covers nearly 900 acres in Queens, once the epicenter of the pandemic in New York.

Yessenia Nicole, 34, who lives in St. Albans, Queens, was teaching one of her daughters how to skate.

“I’ve known how to roller-skate since I was young, but now that I’m old, I think I can’t even do it,” Ms. Nicole said as she watched her 8-year-old, Caleya, skid across the blue pavement.

Ms. Nicole has been coming to the park throughout the pandemic: “This is my me-time; my hiding spot,” she said. “I like coming here because it reminds me of happiness.”

Nearby, the Guayara family was setting up El Papo, an Ecuadorean food stand near the park’s volleyball courts.

Elizabeth Guayara’s father first opened the stand 13 years ago. The family relies on it for income, so after a few months isolating at home last spring, they were back serving food in the park by May.

Ms. Guayara, 20, was living with her family last year in nearby Jackson Heights, an area that was also hit hard by the virus.

“The harsh reality is that a lot of people who come here died,” she said.

But, she said, her family is all vaccinated, and ready to continue serving the hundreds of people who stop by their stand every weekend.

Angie Cardona, 35, and Simon Cardona, 48, came to the park from their home in Corona to set up a barbecue.

Mr. Cardona said that last summer, the park was empty. But this Mother’s Day, as they waited for friends to arrive, he excitedly strung a speaker from a branch on a nearby tree.

“Latin people, we like music,” Mr. Cardona said. “You cannot make a party without music!”

After a year of isolation, Mr. Cardona said he was excited to see both friends and strangers again.

Though Van Cortlandt’s skatepark officially opened last August, it started getting traffic last spring, as locals searched for safe activities during the pandemic.

“We used to sneak in,” Erik Diaz, 29, said. “The authorities wouldn’t care ’cause they knew what was going on with the world, and they felt we were safer in this box.”

Even on slow days, the Van Cortlandt Park handball courts are bustling with handball, paddleball and racquetball players from around the tristate area.

Ronda Soto, 60, who grew up about a mile north of the courts, works the graveyard shift as a security guard. She said that before the pandemic, she would spend a few days a week at the courts. After spending much of last year indoors, she returned this May.

“I work the night shift, so I’ve got to be going home soon to take a nap and go to work,” Ms. Soto said. “But I’m just so happy to see people; I’m seeing people that I haven’t seen in a year. So I’ll sacrifice a little sleep for friends.”

Love and Sisterhood in Prospect Park

On a rainy Saturday, Cameron Ryan and Torraine Futurum were married near the lake in Prospect Park. They were accompanied by five people, there to take photos and officiate.

“We couldn’t narrow down all the family members to make it suitable for an open area without getting a permit,” Mr. Ryan said.

They couple decided to get married after spending the pandemic together in their apartment in the Bedford-Stuyvesant neighborhood in Brooklyn.

“I didn’t want to make a big hoopla about it, so I figured the park would be the easiest thing, and the cheapest thing,” Ms. Futurum said.

They planned to return to the park the following weekend for a celebratory picnic with friends.

“I’m going to be dressed very chic,” Ms. Futurum said, “but we are eating pizza.”

On the last day of Ramadan, Nazma Sultana, 35, and her sister Saima Haider, 21, were in Prospect Park climbing trees.

“I stopped my phone and she stopped hers,” Ms. Sultana said. “Nothing else in the world — just my sister and I.”

Ms. Sultana, a resident of Borough Park, Brooklyn, said that her trips to Prospect Park were a necessary escape from her three children during quarantine.

“When the pandemic happened and everyone was inside, I would just go be me in the nature,” Ms. Sultana said.

Tango on the Christopher Street Pier

On a Wednesday evening, about a dozen Argentine tango dancers — some strangers and some married couples — swayed in the breeze on the Christopher Street Pier.

They were there for a biweekly gathering of people who want to come dance tango on the pier — or just watch.

Michael Zohar came down to the pier from Riverdale, in the Bronx, with his wife, Elli Wurtzel. The couple has been learning tango together for about three years.

“It’s not only a journey that tends to bring people together,” Mr. Zohar said, “but there’s something special that tango helps us to express about ourselves.”

Nearby, Crystelle Desnoyer was dancing with Manuel Ibanez, a tango instructor whom she had met through the weekly group two years earlier.

Ms. Desnoyer said during the pandemic, she and Mr. Ibanez would dance on her roof: “That was really fun, so the neighbors were having dinner and a show.”

But as it became safer, they were eager to return to the pier.

“Tango’s a lot about feeling; feeling each other as partners while also feeling the music and just feeling yourself,” Ms. Desnoyer said. “So when you have the wind and the water it helps you feel it more.”

A Birthday on Morton Street

And as dusk crept over the Hudson River, Miles Francis spent the eve of his 30th birthday writing in his favorite spot.

For the last five years, Mr. Francis said, he’s taken a daily walk from his recording studio in Greenwich Village to watch the sun set over the water. This ritual was disrupted last year, when he was isolating at home in Ridgewood, Queens.

“Last year was just a year of ideas just welling up, but not really knowing how to express them,” Mr. Francis said.

But returning to his routines this year wasn’t easy.

“I’m definitely a little wary,” Mr. Francis said. “It’s just rebuilding that trust in strangers after a time where when you walked by someone you were just trying to stay in your lane.”

It may take a while for New Yorkers to melt back into the rhythms of a city where strangers often stand as close to us as friends or lovers do. But the release of this summer could be a start.

“I like to think that after last year, that people are more compassionate toward each other,” Mr. Francis said. “I’m excited for togetherness with my friends; just hanging out and not feeling a certain overarching pressure the whole time.