Shamika Crawford stood before the judge the day she was arrested in the Bronx. She was free to go, but not to go home: The judge issued an order of protection that barred her from her own apartment.

For the next 88 days, Ms. Crawford was left homeless based on a vaguely worded misdemeanor assault complaint filed by her on-again, off-again boyfriend. She lived in her car and crashed on a friend’s couch. She lost her full-time job. With nowhere to bring her two young children, she left them with the boyfriend, their father, in her public-housing apartment where she kept paying the rent.

“It seems like whoever calls the cops, that’s whose side they’re on,” said Ms. Crawford, 35.

When another judge finally scrutinized the case, it unraveled, and was eventually dismissed.

Situations like Ms. Crawford’s, say public defenders in New York City and some domestic-violence experts, are an everyday occurrence in a corner of the justice system where defendants are effectively presumed guilty rather than innocent.

The temporary protection order, also known as a stay-away order, is a well-intentioned pretrial precaution to shield people from abusive partners. But it is issued with such abandon in city courts that it has become a sentence unto itself. One state lawmaker, Assemblyman Dan Quart of Manhattan, said its overuse amounted to a “family separation policy.”

Prosecutors in domestic violence cases almost always request the orders, and judges grant them almost reflexively: In Ms. Crawford’s case in 2019, the judge said he would issue the order before he had even given her lawyer a chance to speak on it.

But because the vast majority of misdemeanor domestic-violence cases end up getting dismissed, the temporary orders rarely become permanent. In criminal court in the Bronx, which has by far the city’s highest rate of domestic-violence complaints, less than 4 percent of temporary protection orders were converted to permanent ones last year, the state court system said.

Yet the orders typically remain in place for months. And the consequences for people with low incomes and few resources are often disastrous, long after the underlying criminal charge has vanished. Public defenders across the city described case after case where people lose their jobs, their homes, their rental assistance. Immigrants are detained for months. Displaced people sleeping in their cars get attacked and beaten. Families are torn apart.

“It’s punishing somebody before they get convicted of anything, in a huge way,” said Eli Northrup, one of Ms. Crawford’s lawyers with the Bronx Defenders. “Every single day, you have people walking out of the courthouse, and they have nowhere to go.”

In Ms. Crawford’s case, one judge extended the protection order after prosecutors cited an “extensive” history of “at least 16” domestic-violence reports. They did not mention that all of them listed her boyfriend as the aggressor.

“Every arraignment shift I’ve ever been in, there’s been an order of protection that doesn’t make any sense and deserves scrutiny,” Mr. Northrup said.

Lawyers at the Bronx Defenders have filed a challenge in Ms. Crawford’s case asking a state appellate court to rule that she was entitled to a hearing requiring prosecutors to demonstrate that the protection order was necessary. A favorable decision could have the effect of creating a rule entitling defendants to such hearings when they are removed from their homes. The court is expected to decide within weeks.

A bill before the State Legislature calling for the same thing and sponsored by Mr. Quart, who is also running for Manhattan district attorney, stalled before the session ended last week.

The problem has roots late in the last century when New York, like other states, enacted mandatory-arrest laws for domestic-violence cases. That protective impulse is now colliding with another wave of criminal-justice reforms aimed at making the system less punitive, like the 2019 New York law effectively ending bail and pretrial detention for most misdemeanors.

Leigh Goodmark, a scholar who has argued that domestic violence should not be treated differently from other crimes, said that sometimes the complainant turns out to be the real abuser. “There’s literature on it — it’s called systems abuse,” said Ms. Goodmark, director of the Gender Violence Clinic at the University of Maryland law school.

But the overtaxed criminal justice system, she said, defaults to the easiest way to handle a complex problem. “Once police and prosecutors have identified someone as a defendant, it’s like a switch flips for them, and they can’t see that person in any other way, no matter what evidence is offered,” Ms. Goodmark said.

Orders of protection, she added, offer something valuable: cover. “Nobody wants to be the judge who didn’t issue the order of protection and then opens the newspaper the next day to find something horrible has happened.”

A friend-of-the-court brief filed by other public defender groups in the Bronx Defenders’ case ticks off summaries of protection-order cases that read like scenes from Kafka.

A man in Manhattan is separated from his 2-year-old son for seven months while prosecutors refuse to dismiss charges of menacing even after finding that the man’s wife had recanted her accusation and that she herself has been harassing his family.

As for Ms. Crawford, the stack of police reports describing her abuse at the hands of her children’s father, Kevin Mayers, dates back to at least 2013. 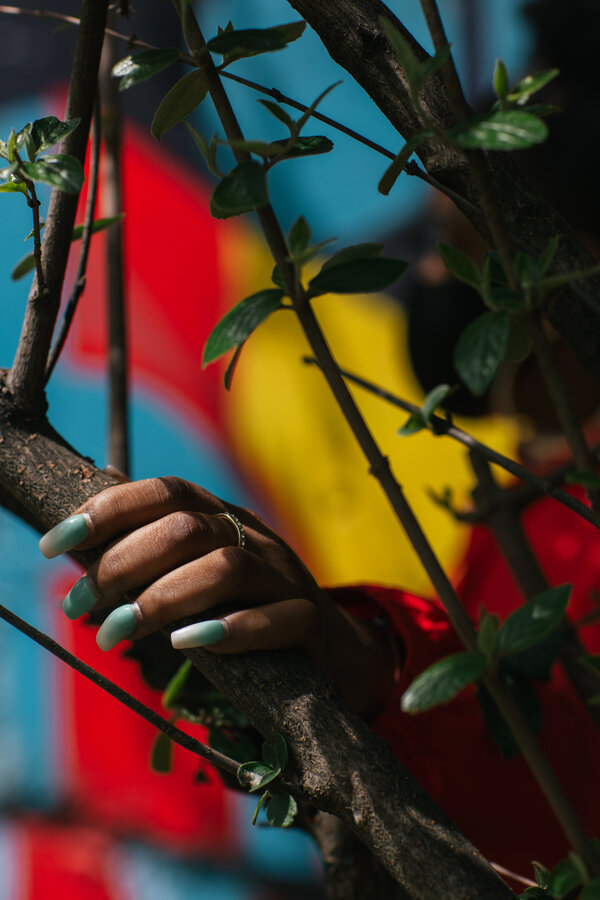 One 2016 report says he punched her in the eye and choked her. Another says that he beat with a stick for having friends over, then fled through the window to evade arrest. He was taken in for psychiatric evaluations twice, including in 2018 after Ms. Crawford said he punched her in the head.

(Mr. Mayers did not respond to a message seeking comment sent to an email listed for him on a police report.)

On Nov. 3, 2019, Ms. Crawford said, Mr. Mayers and her 32-year-old brother brawled at her apartment. She said she did not take part, but she was charged with “acting in concert” with two men accused of punching and kicking Mr. Mayers and stealing a gold chain.

At her arraignment, her lawyer, Edward Soto, asked for a limited protection order allowing her to return home as long as she did not intimidate or assault Mr. Mayers, rather than a full stay-away order. The judge, Jeffrey Rosenblueth, flipped the burden of proof onto the defense, refusing to limit the order without the prosecutor’s consent.

At the next hearing, Mr. Soto complained to a different judge, Shahabuddeen A. Ally, that the protection order had given Mr. Mayers control of Ms. Crawford’s apartment even though he was not on the lease. Judge Ally recommended she go to housing court, where proceedings typically take many months.

Ms. Crawford’s world was collapsing. If she moved with her 5-year-old son and 10-year-old daughter to a shelter, she would lose her lease. She spent weeks sleeping in her car. “I’d put my coat on, go to sleep, wake back up and turn the heat on, warm up a little bit, turn it off,” she said.

As the weather got colder, she moved to her friend’s couch. On video calls to her children, she told them she was in Alabama, visiting family.

“I didn’t want to overwhelm them with a bunch of information that they wouldn’t understand,” she said.

She leafed through six years of reports of Mr. Mayers’s increasingly erratic behavior and wondered aloud about his reliability.

“From all the information I read here,” Judge Stone said of Ms. Crawford to a prosecutor, “I think she is more at risk than your complainant.” She modified the protection order to let Ms. Crawford return home.

A spokeswoman for Darcel D. Clark, the Bronx district attorney, said in a statement that in domestic-violence cases, “We often request full orders of protection because the prior domestic violence history between the parties warrants it and the facts of the individual case support it.”

On March 5, 2020, 123 days after Ms. Crawford’s arrest, her case was on the docket for trial. An assistant district attorney, Paul Andersen, stepped forward.

“The People have an application to dismiss the accusatory instrument as the People cannot meet their burden of proof at trial,” he said. The case was closed.