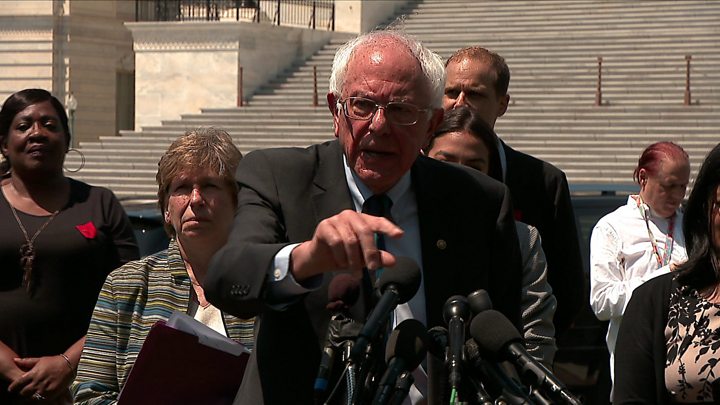 Democratic presidential candidate Bernie Sanders has unveiled a plan to forgive all US student loans, freeing around 45 million Americans from a debt pile that can take decades to pay off.

The Vermont senator’s proposal would see $1.6tn (£1.2tn) paid off through a new tax on Wall Street transactions.

“We will make a full and complete education a human right,” Mr Sanders told reporters on Monday.

Twenty Democratic candidates will joust in two debates this week in Florida.

In the crowded field, Mr Sanders is currently running just behind former Vice-President Joe Biden in the marathon race to become the party’s standard-bearer.

Democrats will next summer pick a White House nominee to take on Republican President Donald Trump in the election of November 2020.

It is the most ambitious student loan policy in the White House race so far, though would currently stand little chance of passing into law through the Republican-led Senate. 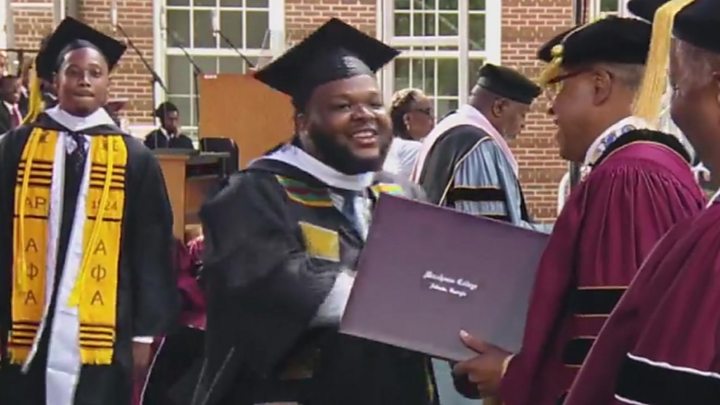 “The American people bailed out Wall Street,” he said as he outlined the plan on Capitol Hill. “Now it is time for Wall Street to come to the aid of the middle class of this country.”

“This proposal completely eliminates student debt in this country and ends the absurdity of sentencing an entire generation, the millennial generation, to a lifetime of debt for the crime of doing the right thing – and that is going out and getting a higher education.”

The proposal will include a 0.5% tax on stocks and a 0.1% tax on bonds, which the Sanders campaign says would pay for the estimated $2.2tn cost of the programme over the next decade.

His latest proposal – part of his College for All idea – is also more ambitious than that of his 2020 Democratic rival Elizabeth Warren, whose plan would see student debt relief based on income levels.

Under Ms Warren’s proposal, individuals with a household income under $100,000 would have $50,000 of their student debt eliminated.

Bernie Sanders caught fire in 2016 with a series of bold – critics would say unrealistic – proposals addressing healthcare, education, the environment and income inequality.

This time around, the Vermont senator is finding it more challenging to stand out in a crowded Democratic field.

Even more concerning for Mr Sanders, another progressive champion, Elizabeth Warren, has risen in the polls and generated considerable enthusiasm for her array detailed policy proposals, including a plan to forgive the student debt of low- and middle-income Americans. Younger voters were a core part of Mr Sanders’s support in 2016, and the Massachusetts senator’s education pitch could draw some of them to her side.

So Mr Sanders is going one step further, proposing free public college tuition and education debt forgiveness for all Americans, regardless of income.

His $1.6tn plan is as costly as it is ambitious. It could start an arms race of increasingly pricey promises from the other candidates. It could also instigate a debate over whether erasing the student debt of more affluent Americans is an effective use of taxpayer dollars.

On the eve of the first presidential debates, however, Mr Sanders needed to take the initiative. This is his play.

In other developments on the campaign trail, Mr Biden on Monday published an opinion piece on immigration in the Miami Herald newspaper.

Miami will host the first 2020 Democratic debates on Wednesday and Thursday.

Criticising Mr Trump’s controversial rhetoric on migrants, Mr Biden said focusing on improving screening procedures and investing in border technology would “do more for our security than a wall ever could”.

Meanwhile, Mr Buttigieg has been facing challenges in his hometown in the wake of a police shooting that resulted in the death of a 54-year-old black man.

At a town hall on Sunday, some black residents questioned the mayor’s policies on law enforcement and blasted his response to the shooting, voicing their distrust in his leadership.

After the tense meeting, Mr Buttigieg told reporters: “This problem has to get solved in my lifetime. I don’t know of a person or a city that has solved it.

“But I know that if we do not solve it in my lifetime, it will sink America.”

Twenty candidates are set to fight for the 2020 Democratic nomination this week during the first debates. So who has a shot at becoming the next president?