And don’t forget Eric Garcetti, the mayor of Los Angeles, and Pete Buttigieg of South Bend, Ind. — “Hi, I’m Mayor Pete,” as he introduces himself — each trying to become the first person to go directly from City Hall to the White House.

But it took some prodding for Stephen K. Benjamin, the mayor of Columbia, S.C., and president of the mayors’ conference, to recall another mayoral long shot: Bill de Blasio of New York City.

In the fast-forming battle for the 2020 Democratic presidential nomination, Mr. de Blasio remains an afterthought, if he is thought of at all.

It is not for lack of trying.

Since the new year, Mr. de Blasio has aimed announcements on health care for undocumented New Yorkers and a new plan for paid vacation at television and news media audiences far beyond the five boroughs. His proposals are a model, he said in television interviews on “The View” and on MSNBC. He promised a series of trips around the country to “preach the gospel” of liberal governance on everything from education to police reform.

The efforts follow a fund-raising push by Mr. de Blasio last year via a national political action committee, Fairness PAC, that raised $469,000 since he launched it in July. He doled out modest sums through the committee for candidates in contested races for governor and Congress, and $25,000 each to the state Democratic parties in Iowa and South Carolina — key presidential primary states.

“He spent some Q.T. there,” said Mr. Benjamin, referring to the quality time Mr. de Blasio spent in South Carolina in September. Mr. de Blasio dined with the chairman of the state Democratic Party, Trav Robertson, during the visit. He later contributed money to the party, as have other potential candidates including Mr. Bloomberg and Mr. Garcetti.

Mr. de Blasio continued his push Thursday, energetically bounding onto the stage at the mayors’ conference for his first address outside New York since his pledge to spread the good word.

But as a player in the 2020 conversation, Mr. de Blasio does not yet register even among his fellow mayors, where he holds clout as the leader of the nation’s largest city, nor among many strategists.

“There’s a sea of faces and a sea of names, and I can’t think of one conversation where he has been mentioned as someone people were hoping for,” Tracy Sefl, a Democratic political consultant, said.

Political operatives and influential Democrats in key battleground states like Iowa and South Carolina were more likely to think of Mr. Bloomberg, the billionaire former Republican, when asked about a New York City mayor running for president.

“Bill de Blasio’s name is nonexistent in Iowa,” said Liz Mathis, an Iowa state senator who met with Mr. Bloomberg in Cedar Rapids in December. “I would suggest if Bill de Blasio has any intention of running, he better get here quickly.”

The mayor even fares poorly in New York City: He appeared last among voters who were asked in a recent poll to rank state Democrats who would make the best president. (Representative Alexandria Ocasio-Cortez fared slightly better, even though she would be too young to run until 2028.)

Mr. de Blasio, who said that he is “not ruling it out” when asked about 2020, brushed off the poll, incorporating it into the outsider, underdog narrative that characterizes his political self-image in his sixth year as mayor. 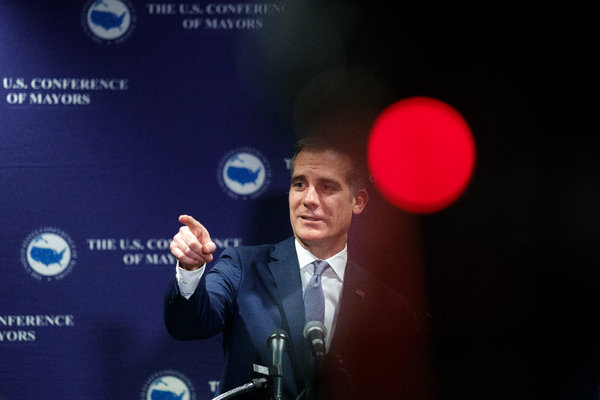 “I have spent a lot of time in dead last in many a poll in many a race,” Mr. de Blasio said in an interview after he spoke at the mayors’ conference. “It’s not where you start. It’s where you end.”

He said he had “strong relationships” in Iowa from previous visits to the state, where he has been traveling since early in his tenure. Those efforts included a failed attempt in 2015 to shape the debate around economic issues, and a 2016 trip in which he knocked on doors for Hillary Clinton but did not appear with the candidate.

Mr. de Blasio, who endorsed Mrs. Clinton but now calls Senator Bernie Sanders’s 2016 campaign the “high-water mark” of recent progressive politics, said the Democratic Party is in a different place and would be more receptive to his message.

“The idea here is to change the way people think,” he said of seeking audiences outside the city. “And I have a bully pulpit. I have a megaphone that very few people have, and I’m going to use it.”

In his 14-minute address, delivered with teleprompters and fingers pointing for emphasis, Mr. de Blasio repeated and refined key lines about income redistribution that attracted notice this month in his State of the City speech.

“We actually do have the money to solve the problems, and I know where the money is,” he said. “This country has spent decades taking from working people and concentrating the wealth in the hands of the 1 percent. That’s where the money is.”

He added: “There’s plenty of money in this country — it’s just in the wrong hands.”

He paused for effect and was greeted by a silent room.

Mr. de Blasio did better when talking about his “guarantee” of health care for all New Yorkers, which drew applause and seemed to surprise some.

Seated in a conference room after the address, Mr. de Blasio said that he expected his “wrong hands” line to fall flat because of the ideologically diverse crowd of mayors, as well as business and government relations people in attendance.

“I have a lot of respect for the Conference of Mayors, but if you know who is in the room, it’s a broad group of people,” he said.

“I think it’s time to push the spectrum,” he added. “I’ve got a story to tell that’s actually about how to change things.”

When Mr. Garcetti was asked about Mr. de Blasio during a news conference after his address to fellow mayors, he said he would be happy to see him, or Mr. Bloomberg, enter the race. (“Stay tuned,” Mr. Garcetti said when asked about his own intentions.)

“I honestly mean this,” Mr. Garcetti told reporters. “I would love to see not only a stage full of mayors and hopefully one of them becoming the nominee, but I would like to see someone come in as president and bring in a cabinet full of mayors.”

He rattled off names: Jenny Durkan, the mayor of Seattle, as attorney general; Mr. Bloomberg as Treasury secretary.

He did not propose a position for Mr. de Blasio.