Bob Dole, who overcame severe combat wounds to become a senior figure in US politics, has died at the age of 98.

The long-time Republican senator from Kansas, who was his party’s unsuccessful 1996 presidential nominee, was known for a wit that ranged from self-deprecating to caustic.

Mr Dole announced in February that he had been diagnosed with advanced lung cancer and would begin treatment.

“It is with heavy hearts we announce that Senator Robert Joseph Dole died early this morning,” the Elizabeth Dole Foundation said in a statement on Twitter.

“He had served the United States of America faithfully for 79 years.” He sought the presidency three times and was the Republican Party’s nominee in 1996, but lost to Democratic incumbent Bill Clinton.

Mr Dole was his party’s vice presidential nominee in 1976 on a ticket headed by incumbent President Gerald Ford, but they lost to Democrat Jimmy Carter and his running mate Walter Mondale. 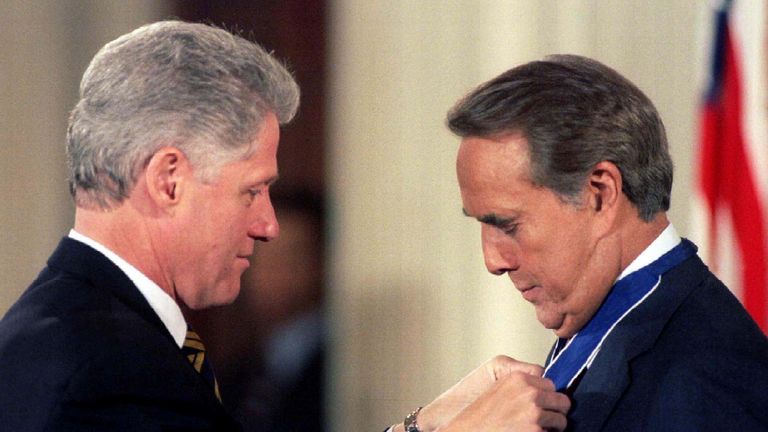 Known for referring to himself in the third person, he lived through the Great Depression of the 1930s and the World War Two battlefields to the corridors of power.

He helped shape tax and foreign policy, while accessible government offices, national parks, pavement ramps, and the sign-language interpreters at official local events are just some of the more visible hallmarks of his legacy.

Meghan McCain, daughter of the lateJohn McCain, wrote: “Very sad to hear of Bob Doles passing. He was a true statesman who fought for our country honorably and personified all that is the greatest generation.

Speaker of the House of Represenatives, Nancy Pelosi, ordered the flags at the Capitol to be flown at half-mast in his honour, according to her spokesman.