BOSTON — Kim Janey, Boston’s acting mayor, announced on Monday that she had terminated the city’s police commissioner, Dennis White, over allegations of domestic abuse that emerged in February, shortly after he was appointed to the job.

Ms. Janey has been trying to remove Mr. White since May, when an independent investigation detailed accusations by his former wife that he had hit and threatened to shoot her in 1999 when they were married. Another woman alleged that he had hit her.

Mr. White, who was placed on leave when the allegations emerged, has denied wrongdoing and vigorously fought his removal in court.

The standoff has pitted Ms. Janey, Boston’s first Black and female mayor, against its second Black police commissioner, who dismissed the allegations against him as false and tainted by racism.

On Monday, Ms. Janey said she rejected that argument.

“The disparate treatment of Black people in our country is a genuine concern, but let’s be clear: Racism is a burden carried by both men and women of color, and I will not turn a blind eye to domestic violence against Black women, or any women, for that matter,” she said.

She condemned Mr. White for failing to express remorse, and said that while he was on leave, he had tried to obstruct the investigation by lingering around Police Headquarters, which she said “fostered a climate of intimidation.” 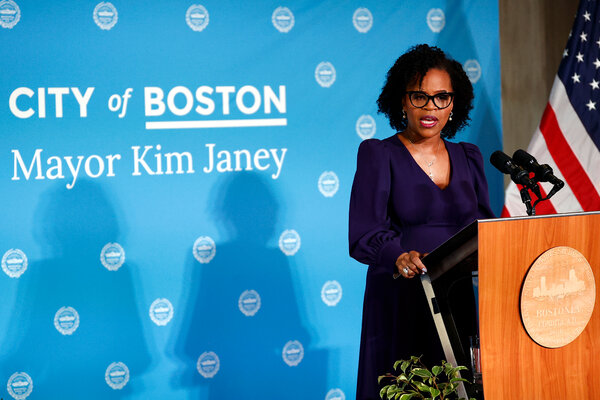 To allow him to remain, she said, “would send a chilling message to victims of domestic violence, and reinforce a culture of fear and a blue wall of silence in our Police Department.”

Mr. White’s lawyer, Nick Carter, blasted the mayor’s decision, describing his client in a statement as “a Black man, falsely accused of crimes, not given a fair trial or hearing, and then convicted, or terminated which is the equivalent here.”

“This reflects an ugly pattern in our country,” Mr. Carter said, adding that Mr. White planned to file a civil rights claim against the city “to send a message that this kind of unlawful and harmful treatment must not be allowed to happen again to anyone.”

Friction with the city’s Police Department has dominated Ms. Janey’s first months as acting mayor, a high-profile tenure that she hopes will position her to win the office this fall. Mr. White was appointed by her predecessor, Martin J. Walsh, who left his seat to become secretary of labor.

Immediately after Mr. Walsh swore Mr. White in as police commissioner, The Boston Globe reported on a restraining order granted by a judge in 1999, after his wife at the time, also a Boston police officer, said he threatened to shoot her. The two divorced in 2001. Though the claims were the subject of an internal affairs investigation, he was neither disciplined nor charged with a crime.

Mr. Walsh abruptly placed Mr. White on leave, adding that “these disturbing issues were not known to me or my staff, but should have been at the forefront.” Mr. White has contradicted that claim, saying in a sworn affidavit that he told the former mayor about the restraining order.

The city’s investigation described widespread obstruction of the inquiry within the Police Department. Of 21 officials approached by the investigating lawyer, only seven agreed to talk. One retired officer said he got five phone calls from colleagues discouraging him from cooperating.

Ms. Janey said on Monday that she would impose new requirements on candidates for police leadership positions, requiring thorough vetting and background checks.

“The residents of Boston must have confidence the officers charged with enforcing laws are themselves people of integrity,” she said.

Policing is shaping up as a central issue in the race for mayor, in which three of the front-runners — Ms. Janey and City Councilors Michelle Wu and Andrea Campbell — have called for deeper cuts to the police budget. Another top candidate, City Councilor Annissa Essaibi George, has said she would increase police staffing and funding.