In the aftermath of the deadly mass shooting at a high school in Parkland, Fla., in 2018, cities across the country began passing their own gun control laws when state and federal governments failed to act.

The city of Boulder, Colo., was one of them, unanimously adopting a wide-ranging ban on the sale and possession of assault weapons, high-capacity magazines and bump-stock devices. “I think it’s time to say ‘enough,’” Jill Adler Grano, the City Council member who proposed the ban, said after the council’s initial vote.

Gun rights supporters filed an immediate challenge, arguing that only the state could regulate firearms in Colorado, and earlier this month, a state judge agreed. Boulder was prohibited from enforcing its nearly three-year-old assault weapons ban.

Less than two weeks later a man armed with an assault-style weapon walked into a Boulder supermarket and opened fire, killing 10 people.

The gunman could have purchased his weapon in another town, but there has been a particularly keen sense of dismay and frustration in a city that tried, and failed, to prevent one of the most horrific kinds of gun violence.

“My heart is broken,” said Ms. Adler Grano, who is no longer on the City Council. “We tried so hard to prevent this from happening, yet here we are.”

In the wake of the Parkland massacre, Boulder was primed to take action. The city is only 30 miles away from Columbine High School, where 12 students and a teacher were fatally gunned down in 1999. It is 35 miles from Aurora, where 12 people were killed by a gunman who walked into a movie theater and opened fire. In all, since 1993, 47 people have died in mass shootings in public spaces in Colorado. 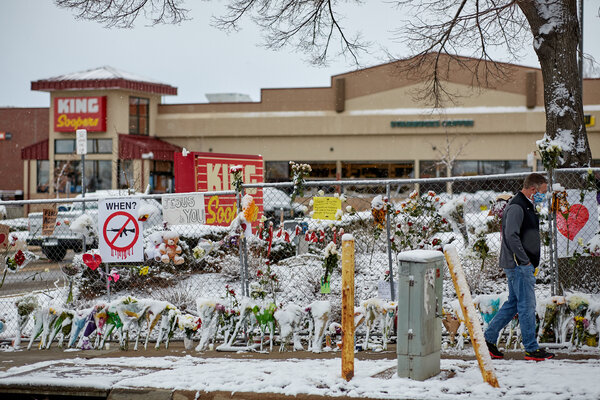 But Boulder’s aborted effort to control the kind of weapons used in such attacks has illustrated the daunting challenge of cities that try to go it on their own: Aggressive legal challenges have successfully undermined some local ordinances. Lawmakers who endorse gun control legislation have been ousted. The industry keeps innovating around gun regulations. And perhaps most daunting of all is the state law that provided the basis for the challenge to Boulder’s ordinance, a pre-emption — similar to those in effect in more than 40 states — that gives the state sole authority to regulate firearms.

“It’s incredibly challenging,” said Stephen Fenberg, a Democrat who is Colorado’s Senate majority leader. “We are a traditional libertarian Western state. We’re also a state that has seen a lot of gun violence. It’s a complicated topic for us.”

Across the country, gun regulation has become a patchwork of laws, with a variety of federal, state and local laws regulating sales, storage and allowable specifications for firearms.

Gun rights advocates have been strong supporters of state pre-emption laws like Colorado’s, arguing that local ordinances like Boulder’s are a nightmare for gun owners who must navigate varying restrictions from city to city.

In Colorado, with a strong hunting tradition among liberals and conservatives alike, a variety of gun control measures have been adopted but there is also powerful bipartisan support for Second Amendment rights. Still, most of the regulations passed have cleared the legislature over the overwhelming opposition of Republican lawmakers.

After the supermarket attack this week, the Colorado State Shooting Association, which is affiliated with the National Rifle Association, said in a statement that it would oppose all gun control measures as a “mistaken way to attempt to prevent these shootings.”

Taylor Rhodes, the executive director of the gun rights group Rocky Mountain Gun Owners, said lawmakers in Colorado should embrace regulations that allow the carrying of weapons without a permit in order to prevent more mass shootings. But he acknowledged that gun control efforts have been increasingly successful in the state.

“They’ve been gaining traction over the years, but we’re still here fighting, and we won’t stop fighting,” Mr. Rhodes said.

The state’s regulation history has been a series of steps, many of them halting.

After the Columbine massacre, lawmakers proposed to close a loophole that had allowed people to buy weapons at gun shows without a background check. But it took a voter initiative to make it into law.

After the Aurora attack, whose ferocity was accelerated by the use of a 100-round drum magazine, Colorado lawmakers restricted the size of high-capacity magazines, one of a series of new control measures.

Not long after, two Democratic lawmakers who had provided crucial support for the package were pushed out of office in a recall vote.

Ahmad Al Aliwi Alissa, who lived in the nearby suburb of Arvada, has been charged with 10 counts of first-degree murder in the latest attack at a King Soopers grocery store in Boulder. Despite Mr. Alissa’s own history of aggression, he had managed to purchase a semiautomatic pistol the week before the shooting, and also had a second gun in his possession at the time of the attack, according to a police affidavit.

AR-style weapons, first developed for battlefield use, have for years been a growing target of gun control advocates as such firearms repeatedly are deployed during mass shootings.

The gun purchased by Mr. Alissa was a Ruger AR-556 semiautomatic weapon, essentially a shortened version of an AR-15-style rifle marketed as a pistol. The authorities have not said where Mr. Alissa bought the weapon.

Under federal law, shortened rifles have strict regulations, based on fears that such high-powered weapons can be concealed before the commission of crimes. Under Colorado state law, such rifles are banned.

What to Know About Gun Laws and Shootings in the U.S.